TechSmith. With the imminent discontinuation of Adobe’s support for and development of Adobe Flash, Jing’s use of the .SWF Flash video format will no longer be possible. 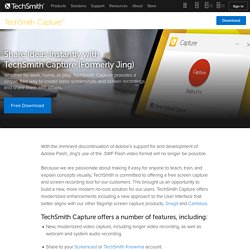 Because we are passionate about making it easy for anyone to teach, train, and explain concepts visually, TechSmith is committed to offering a free screen capture and screen recording tool for our customers. This brought us an opportunity to build a new, more modern no-cost solution for our users. TechSmith Capture offers modernized enhancements including a new approach to the User Interface that better aligns with our other flagship screen capture products, Snagit and Camtasia.

TechSmith Capture offers a number of features, including: New, modernized video capture, including longer video recording, as well as webcam and system audio recording. For screenshots, Capture offers: Full screen and regional image capture. For more about the retirement of Jing and the transition to TechSmith Capture click here. Soapbox. Empower Every Voice. Jing (Free Trial) Stage: Interactive Whiteboard and Document Camera on the App Store. 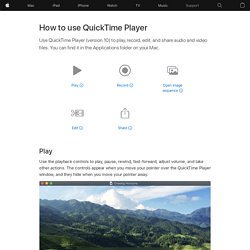 You can find it in the Applications folder on your Mac. Play Use the playback controls to play, pause, rewind, fast-forward, adjust volume, and take other actions. The controls appear when you move your pointer over the QuickTime Player window, and they hide when you move your pointer away. To move quickly forward or backward through the timeline, swipe with two fingers on your trackpad, scroll with your mouse, or drag the handle in the timeline. 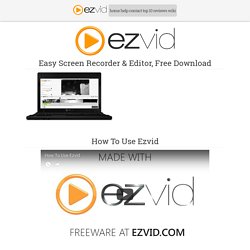 Ezvid is exceptional because of the power of its cutting-edge effects and features. With voice recording, facecam, voice synthesis, screen drawing, and speed control, Ezvid the world's single best solution for making videos which entertain, inform, and enchant your viewers. With one click, you can record your screen with Ezvid, and capture whatever appears on your computer screen: Web pages, games, applications, paint programs, maps — the list goes on and on. Edit your video and then save it for later, or upload it directly to YouTube: the choice is yours. Ezvid harnesses the power of your computer to create incredibly sharp and high resolution movies of whatever appears in front of you.

And Ezvid is FAST. Since release in early 2012, Ezvid has been downloaded more than three million times and used to make millions of videos on YouTube. Write-on Video - Explain, express, and share with your own words in storyboards or videos!