The Spiderweb Strategy. First, let’s consider a grid: On the X axis, we’ll chart a product’s customer base size, from 1 to a few billions: And on the y axis we’ll chart the service’s monthly average revenue per user. 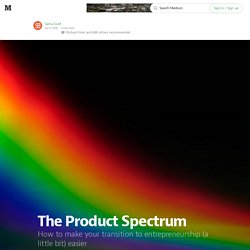 Let’s try and approximately plot the location of a few products. For argument’s sake, we’ll consider full-time employment as a “product” in which you sell your own time for several thousand dollars a month to a single employer. This gives us something like this: Freelancing would be next. Next up would be productized consulting, such as Nick Disabato’s Draft Revise.

Going further, you reach the domain of “info-products”, a.k.a. eBooks, video courses, and so on. (Of course, this is not recurring revenue. After info-products come more traditional SaaS B2B apps like Intercom, Mixpanel, or Vero. You then have small businesses or B2C apps like Buffer, which only charges $8 per month but has tens of thousands of customers. Because I picked the units myself, these data points end up nicely aligned. The Spiderweb Strategy. I’ve been known to launch a few projects. 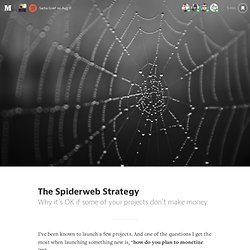 And one of the questions I get the most when launching something new is, “how do you plan to monetize it?”. Here’s the thing: most of the time, I didn’t have a clue. So I’d mumble something about ad revenue, and quickly change the subject. This used to keep me up at night. Was I working on the right things? It all changed the day I got bit by a radioactive spider who also happened to be particularly good at marketing.

Note: if you want to read more about product strategy, be sure to also check out my previous piece, The Product Spectrum. The Product Network. How Top Startups Pay Designers. A few weeks ago I had coffee with an experienced product designer. 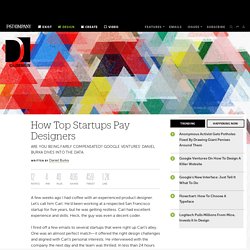 Let’s call him Carl. He’d been working at a respected San Francisco startup for five years, but he was getting restless. Carl had excellent experience and skills.

Ubators. 5 Rules For Crowdfunding Success From The Queen Of Multitasking Underwear (You Read That Right) Technology probably isn't the first thing most people think of when they think of underwear. 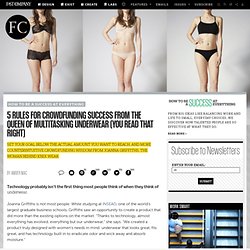 Joanna Griffiths is not most people. While studying at INSEAD, one of the world's largest graduate business schools, Griffiths saw an opportunity to create a product that did more than the existing options on the market. "Thanks to technology, almost everything has evolved, everything but our underwear," she says.

"We created a product truly designed with women's needs in mind: underwear that looks great, fits great, and has technology built in to eradicate odor and wick away and absorb moisture. " Griffiths needed a way to fund her new venture, Knix Wear. The campaign was a success, surpassing the $40,000 goal (by an extra $20,000). 1. Before you start your crowdfunding campaign, Griffiths suggests that it's important to study others who have done it well. 2. No matter how much experience you have in the crowdfunding space, it requires a strategic approach to reach--and exceed--your goal. 3.

Divide And Conquer: A Tale Of Two Startup Founders, Two Cities, And One Great Idea. I’m fortunate to meet and work with a wide range of industrious and passionate founders of early-stage businesses, and I'm always fascinated to hear about new and unique challenges they face when starting a new business. 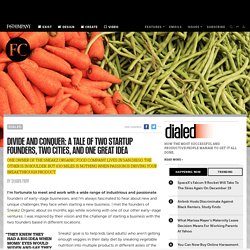 I met the founders of Sneakz Organic about six months ago while working with one of our other early-stage ventures. I was inspired by their vision and the challenge of starting a business with the two founders based in different locations. Sneakz’ goal is to help kids (and adults) who aren’t getting enough veggies in their daily diet by sneaking vegetable nutrition into multiple products in different aisles of the grocery store. Life After Kickstarter: 5 Costly Lessons From A Kickstarter-Backed Designer. For Jon Fawcett, Kickstarter success came with an unusual soundtrack: an air horn. 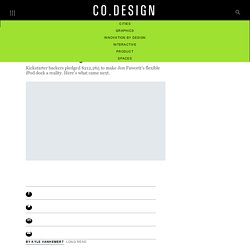 The din started on May 7, 2012, the day Fawcett and his colleagues at Fuse Chicken, a four-person design outfit in Akron, Ohio, launched their first Kickstarter campaign. They were trying to raise funding for Une Bobine, a product of Fawcett’s design that stuffed an iPhone charging cable inside a metal gooseneck, allowing it to double as a flexible docking station and makeshift tripod. It was a simple, clever idea, and the team set out with the modest goal of raising $9,800 to put it into production.

In anticipation of their micro-windfall, the Fuse Chicken office prepared a ceremony of sorts. In the days leading up to the campaign, team members downloaded a slew of sound effects to their computers, with the idea that they’d play them in celebration whenever they received a new pledge. “That lasted for about two days,” Fawcett says. The Designer Fund. 6 Startup Lessons From Designers At Pinterest, Fuseproject, And Behance. In 2011, over 60 designers started the Designer Fund, to give angel funding, mentorship, and connections to designers creating businesses with positive social impact. 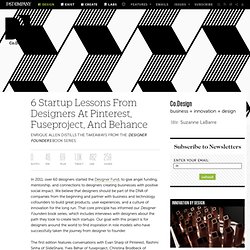 We believe that designers should be part of the DNA of companies from the beginning and partner with business and technology cofounders to build great products, user experiences, and a culture of innovation for the long run. That core principle has informed our Designer Founders book series, which includes interviews with designers about the path they took to create tech startups. Our goal with this project is for designers around the world to find inspiration in role models who have successfully taken the journey from designer to founder. Blowing Up Startups Since 2010.