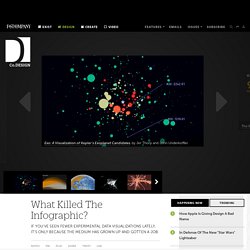 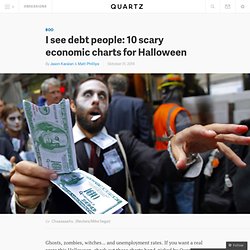 If you want a real scare this Halloween, check out these charts hand-picked by Quartz’s writers and editors that show the most ghastly trends in the global economy. But be warned—these blood-curdling bars and bone-chilling lines aren’t for the squeamish… 1. Southern Europe’s jobless youth. Mapas increíbles que cambiarán su visión del mundo. TrendViz Turns News Relevant To You Into Sleek Data Visualizations. In the age of information overload, it can be hard for companies to keep track of every bit of news, social media, and online dialogue relevant to their brands. 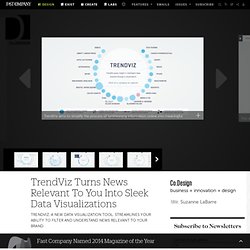 Even more difficult is synthesizing this barrage of information into meaningful insights, patterns, and trends. TrendViz aims to make this process easier. This data visualization tool, created by Netherlandish design agency Clever°Franke in collaboration with data analysis company Ai-Applied, offers a bird's-eye view of the online presence of any brand, organization, or market. Mapped: U.S. Cities With The Best Quality Of Life. A new data visualization project from Data Driven Detroit, a nonprofit initiative focused on making information about the Detroit area accessible, now provides a broad look at the conditions of cities across America. 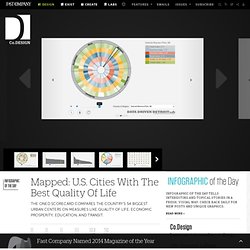 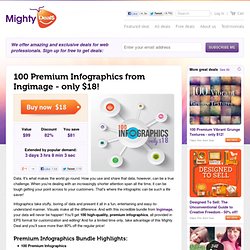 It's what makes the world go round. Iconos. Infographic/data visualization (graphic design) en Pinterest. 20 Incredible Analytics Designs. Analytics are a collection of immense amounts of data. 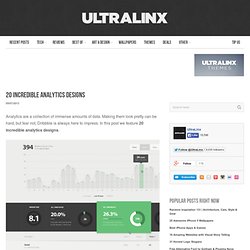 Making them look pretty can be hard, but fear not, Dribbble is always here to impress. In this post we feature 20 incredible analytics designs. Hungry Tech Giants: 15 Years of Acquisitions. 16 Of Science's Best Infographics, From Ancient Greece To Today. In a time when everything from the endangerment of the Juggalo to Carrie Bradshaw's shoe collection is turned into a clever little chart, it can be easy to dismiss infographics as trendy and inconsequential. 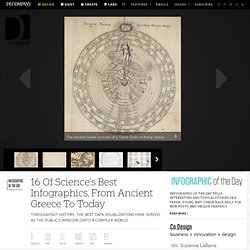 But since ancient Greece, the best data visualizations have furthered popular understanding of science, serving as the nonacademic public’s key to knowledge. Some vintage infographics were even used as political tools, effecting social change through educational campaigns. Beautiful Science: Picturing Data, Inspiring Insight, now on view at the British Library, takes us through the history of data visualization, focusing on themes of public health, weather, and evolution. These Stunning, Encyclopedic Collages Are A Guidebook To Human Knowledge. Casey Cripe thinks big. 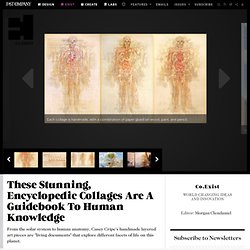 The San Francisco-based artist, who makes stunning layered collages exploring everything from human anatomy to the solar system, first started wondering about the nature of the universe as a child. He asked himself why no one had created a comprehensive "guidebook to life"--or if they had, why it wasn’t widely known. These Maps Redraw Cities Based On How Long It Takes To Get Around Without A Car.

How much time will it take to reach point X by foot or public transit? 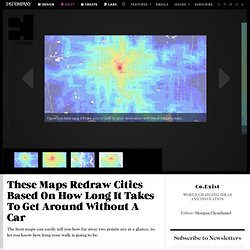 That's the question that these elegant maps try to answer. Rather than plug in addresses on Google Maps, you simply click on a point and see a heat-map visualization from your current location. Red means 10 minutes. Yellow means 20 or 30 minutes. Green and blue take a bit longer.The maps were developed by Andrew Hardin, a graduate student at the University of Colorado. Here is San Francisco: Seattle: Denver: DataViva. The Best Of Fritz Kahn, Grandfather Of Data Visualization. We’re in the golden age of infographics. 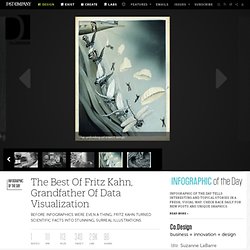 Everything from the death toll in Breaking Bad to the sinking of the Titanic to trends in men’s jewelry has been rendered in fancy little charts, graphs, and maps. Infographics transform dense and dry facts into eye candy, and the Internet can’t get enough. The Science Of A Great Subway Map. The most famous New York City subway map is the one New Yorkers rejected. That would be Massimo Vignelli's system map from 1972. Vignelli's modernist design stressed visual clarity over geographical precision; all the lines ran vertical or horizontal, for instance, and rectangular Central Park was rendered as a square. Public pressure led subway officials to replace the map in 1979 with one much less distorted in style but also far more cluttered to the eye.

A Thousand Milieus on Datavisualization. How We Visualized the Vividness of Geneva on Datavisualization. Over the last few months we’ve been kept busy with designing visualizations for the project “Ville Vivante”. Based on the premise that the mobile phone has become the center of our everyday communication and main source of information, the City of Geneva, in cooperation with the Lift conference, decided to take the challenge to visualize the digital traces created by our mobile phones. Image Result for.

8 Of The Year's Most Creative Infographics. Fancy flowcharts! Colorful maps! A running cheetah made see-through! In this age of information overload, infographics have evolved into a vital new vernacular, transforming the Internet’s daily avalanche of facts and figures into digestible and often beautiful images. Edited by Pulitzer-Prize winning journalist Gareth Cook and with an introduction by polymath musician-writer-data visualization fanatic David Byrne, The Best American Infographics 2013 offers 165 pages of graphic answers to questions you never thought to ask, from “How fast is Usain Bolt?” The Internet map.

Posters-minimalistas-de-filmes. Infographic: Where In Afghanistan Billions Of Dollars Are Being Invisibly Spent. John F. Sopko, the Special Inspector General for Afghanistan Reconstruction (SIGAR), is none too popular with the State Department right now. A former prosecutor with a savvy for publicity, Sopko has been airing his grievances about the United States' reconstruction efforts for Afghanistan for months now, claiming that America is flushing hundreds of millions of dollars down the drain, with little to show for it and no end in site.

It's a problem of accountability, Sopko says, and his organization has released these maps to prove it. They show the few areas in Afghanistan where SIGAR is allowed to travel. The point? Right now, the United States is pumping more money into Afghanistan than any other country. Unfortunately, that money hasn't accomplished much, says the NGO watchdog International Crisis Group. 30 Useful Infographics for Designers & Developers. There aren't many better ways to gain information these days than infographics. Infographics allow designers and non-designers to compile interesting, important and funny information all into one creative package. An infographic is meant to tell a story and provide information in a visually striking way. You can use an infographic to visually display statistics, facts, data, and anything else. Today, we've compiled a list of useful and funny infographics for both designers and develoeprs.

You'll see things that will make you laugh, and infographics that you can use as a reference sheet on a daily basis. Funny Infographics for Designers and Developers A Day in the Life of a Graphic Designer. Un Atlas de la cartografía radical, el libro que despliega lo invisible. Re-Imagining Iconic U.S. Skylines Based On Wealth Inequality. Intense wealth inequality in America only grew during the recession and recovery. See Your Life Story Told In Pop-Hued Charts. Sometime around 2007, the notion of the quantified self started to solidify its place in tech and popular culture. Inspirational Examples of Icon Sketching.

GDELT Protest Data Over Time. 30 Useful Infographics for Designers & Developers. 40 Maps That Will Help You Make Sense of the World. A Biased Map Of Every Global Protest In The Last 40+ Years. Infographic: The History of Tech, Charted As A London Tube Map. Infographic: A Map That Compares Global Birth And Death Rates At A Glance. This Is the Most Detailed Picture of the Internet Ever (and Making it Was Very Illegal)

Tidemark's Infographics Could Change How Your Business Is Run. What's The Secret To Great Infographics? HERE IS TODAY. Jer Thorp: Make data more human. Global Dependency Explorer. Data-Visualization Firm's New Software Autonomously Finds Abstract Connections. 20 Inspiring Uses of Data Visualization. Infographic: Showing When People Get Killed In Cars, Using Excel. Infographic: Google's Flu Map Might Predict The Next Big Epidemic. Giving Israel-Palestine The Infographic Treatment (Carefully, And By The Numbers) Color of the year 2010. Infographic: The Periodic Table Of Alcohol Is The Ultimate Cocktail Primer. Infographic: The Grinders Vs. The Dreamers. Who Wins? Mapping the Nation - A Companion Site to Mapping the Nation by Susan Schulten.