Brew Objects Like Kombucha With This 3-D Printer. Anyone who’s fermented their own kombucha has encountered the SCOBY—a mucusy colony of yeast and bacteria that floats on the surface to give the tea its funky bite. 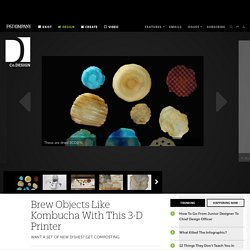 Dried out, and a SCOBY becomes a little disc of vegan leather. But what if a SCOBY broke free of its jar? What could it become then? That’s the general premise of Growduce, a conceptual 3-D printer by Centre de Recherches Interdisciplinaires master's student Aakriti Jain and designer Guillian Graves. It’s essentially a fermentation tank that you feed with compostable scraps, and over the course of about two weeks, the SCOBY (not a true kombucha SCOBY, but very similar in biological makeup) will grow into a shape of your liking—ranging from bandages to gloves.

"We understand this perhaps requires a shift in thinking about the materials we use," Jain writes in an email, alluding to the potential squeamish factor of the stuff. The environmental benefit sounds seductive. One catch is that the SCOBY needs a template to grow on. Could This 3-D Printed Cast Really Heal Bones Faster? In the near future, having a broken arm could look way cooler thanks to a new, black, lightweight 3-D printed cast that's patterned like latticework and which uses an ultrasound device to make bones heal more quickly. 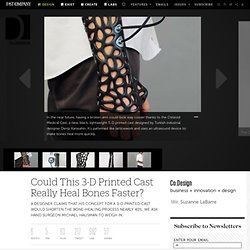 Designed by Turkish industrial designer Deniz Karasahin, the Osteoid Medical cast recently won the A’Design Award in the 3-D Printed Forms and Products Design category. The cast, which could be mistaken for a punk fashion statement, is filled with ventilation holes to reduce the itchiness, bulk, and smell that usually plague wearers of traditional plaster casts. The Osteoid is currently in concept stages, but if it were turned into a commercial product, would doctors embrace the design? 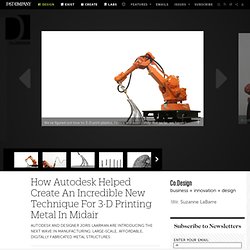 Metal--the material that forms the skeleton of any city, building, or car--has been less accessible. Now, a collaboration between Dutch designer Joris Laarman and software company Autodesk has yielded something groundbreaking: an affordable technique for printing large metal structures, called MX3D-Metal. Laarman has spent the past few years working on the edge of digital fabrication--a few years back he created chairs based off an algorithm that could ape the structure of human bones and tree growth. Wheelchair-Bound Woman Walks Again With a 3D Printed Exoskeleton.

Environmental Impacts of 3D Printing. By Jer Faludi 3D printing is poised to revolutionize manufacturing; will it also revolutionize the ecological impacts of making things? 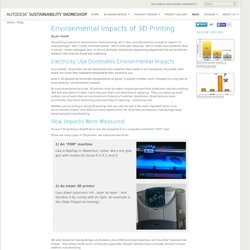 Will it really eliminate waste? Will it eliminate shipping? Will it create more problems than it solves? Some colleagues and I in the UC Berkeley mechanical engineering department set out to find the answers, and what we found was surprising. Electricity Use Dominates Environmental Impacts In a nutshell, 3D printers are not necessarily less wasteful; their waste is not necessarily recyclable; their waste isn't even that important compared to their electricity use.

Even if 3D printers did eliminate transportation of goods, it wouldn't matter much--transport is a tiny part of most products' environmental impacts. At mass-manufacturing scale, 3D printers have far higher impacts per part than traditional injection molding. Whether you’re milling or doing 3D printing, how you use the tool is the most important factor in its environmental impact. 1. 2. 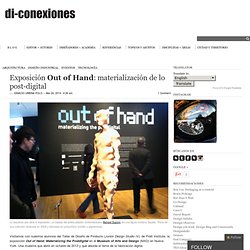 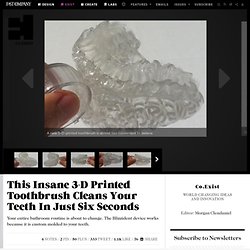 A new 3-D-printed toothbrush, designed by dentists and engineers, can supposedly clean your teeth in just six seconds. It's almost too convenient to believe. The Blizzident toothbrush does its job so quickly because it's custom-made and shaped just like your teeth--and so, the creators claim, you can just bite down, grind your teeth on the toothbrush for six seconds, and go on with your day. This Insane 3-D Printed Toothbrush Cleans Your Teeth In Just Six Seconds. Autonomous Vehicles, Big Data, And 3-D Printing Are All Nearing The Top Of The Hype Cycle. Is that new gadget you're developing on the "Slope of Enlightenment"? 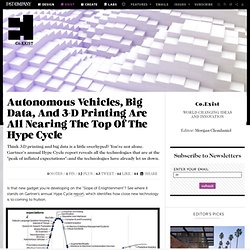 See where it stands on Gartner's annual Hype Cycle report, which identifies how close new technology is to coming to fruition. Home MakerBot. 3-D Printing On Demand Is Now Available From Your Friendly Neighborhood Geek. Your New Favorite Action Figure Makes You The Superhero. "It is a pretty uncanny feeling to hold a tiny version of yourself or a loved one," says Jordan Williams, president of Captured Dimensions, a new Texas-based company that uses 3-D body imaging and 3-D printing to create miniature replicas of customers' bodies. 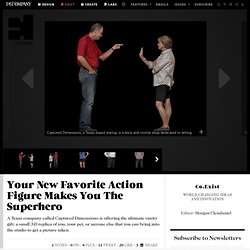 "It can feel a bit creepy at first, but ultimately, most people think it's pretty awesome. " While we've reported on a similar idea in the past (featuring examples in Japan and Germany), Williams's startup represents the first of its kind in the U.S. --a brick and mortar shop dedicated to letting people get 3-D printed, photo-realistic replicas of themselves, their loved ones, and their pets (along with other 3-D modeling services, like 3-D scanning of sculptures or museum artifacts, and asset creation for video games). The process is simple. "This technology is still in its infancy," Williams says. Print These 20 Things You Don't Really Need And Your 3-D Printer Pays For Itself. On Thingiverse, a site where anyone can share their 3-D digital designs for others to use, you can find the blueprints for printing a world of oddities: a scale model of a great white shark skull, Star Wars cufflinks, and the “Monster Cube” puzzle, to name a few entries among the 60,000 open-source designs that Joshua Pearce, a researcher at Michigan Technological University, estimates live on the site. 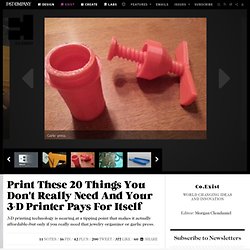 But among the curiosities are also a growing number of common household items that can be made on a 3-D printer and are actually pretty useful. So Pearce decided to do the math. In a study published in the journal Mechatronics in July, Pearce discusses 20 common household items he found on Thingiverse, and how he then searched Google Shopping to calculate a range of what it would cost to get these items shipped to his door.

His conclusion? “For the average American consumer, 3-D printing is ready for showtime,” he writes. This all seems exciting on the surface. 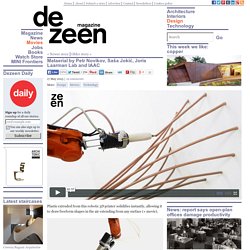 Unlike normal 3D printers that require a flat and horizontal base, Mataerial prints with plastic that sticks to horizontal, vertical, smooth or irregular surfaces, without the need for additional support structures. Petr Novikov and Saša Jokić from Barcelona's Institute for Advanced Architecture of Catalonia created the machine during their internship at Joris Laarman Lab, where students are given a platform to experiment with new digital fabrication methods.

Dans ce contexte, les bibliothèques se redéfinissent en tant que projet de curation et de création. L’âge de la participation correspond aussi au moment où l’accès aux ressources numériques tend à faire décroître les superficies nécessaires pour le stockage des collections. 3D Printshow 2012. How long before we're eating 3D-printed food? In this article from Print Shift, our one-off magazine about additive manufacturing, Dezeen's Ben Hobson asks how soon we could be tucking into 3D-printed steaks. The concept of 3D-printed food is hard to swallow, but technology that could revolutionise the way we cook is hotting up. In 2009, Philips Design presented a sci-fi vision of the future with a conceptual food printer that could produce a perfectly balanced meal at the touch of a few buttons. Part of a research project called Food Probe, which looked at how we might source and eat food in 15 to 20 years’ time, the imagined machine would allow our future selves to print out our ideal combinations of flavours and nutrients in an unlimited range of forms.

It sounded too Star Trek to be true (as Dezeen readers were quick to point out when we originally ran the story). Janne Kyttanen. ‘The Liberator’, la primera arma impresa 100% en 3D. Cody Wilson, el abogado que imprimió ‘The liberator’. Foto: Lance Rosenfield. 3D Scanning at the Smithsonian.