The VICE Report. Stalin: Inside the Terror. (Official Movie) THRIVE: What On Earth Will It Take? Klaus Dona - The Hidden History of the Human Race - Must Watch. Alchemy - Sacred Secrets Revealed. Pbs nature. Bonobo Ape - Our Closest Relative (Nature Documentary) Nature - Broken Tail - A Tigers Last Journey. One Step Beyond - "The Sacred Mushroom" - FULL EPISODE. Obey. 121 Documentaries To Expand Your Consciousness. Here is a list of over 100 documentaries you can watch for free online. 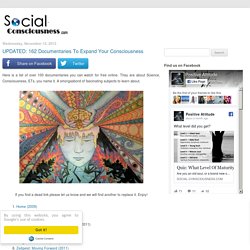 They are about Science, Consciousness, ETs, you name it. A smorgasbord of fascinating subjects to learn about. If you find a dead link please let us know and we will find another to replace it. Enjoy! 1. Credits: OpenBoxThinking & Altering-Perspectives. BBC iPlayer - Jimi Hendrix: The Road to Woodstock. Tikkun olam. Rasa Malaysia: Easy Asian Recipes. Magical Egypt (Ep VIII Cosmology) 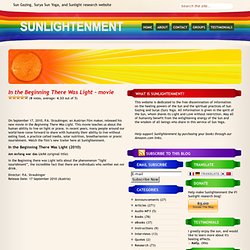 On September 17, 2010, P.A. Straubinger, an Austrian film maker, released his new movie In the Beginning There Was Light. This movie teaches us about the human ability to live on light or prana. In recent years, many people around our world have come forward to share with humanity their ability to live without eating food, a practice called inedia, solar nutrition, breatharianism or pranic nourishment. In the Beginning There Was Light (2010) Am Anfang war das Licht (original title) In the Beginning there was Light tells about the phenomenon “light nourishment”, the incredible fact that there are individuals who neither eat nor drink. Director: P.A. Source: JF interview. Robert Sapolsky: The Psychology of Stress. Inside Job. Secret Rulers of the World - Bilderberg Group. The Secret Rulers of the World - The Legend of Ruby Ridge (Complete) Secret Rulers of the World - Bohemian Grove - Alex Jones & Mike Hanson On British Television. Secret rulers of the world. Crazy.Rulers.of.the.World-pt1-The Men Who Stare At Goats Video by Neo - Myspace Video.

Jon Ronson Kidneys For Jesus. David Icke, The Lizards and The Jews [full documentary] Buddha in Suburbia. Buddha in Suburbia tracks the extraordinary journey of 40 year old Lelung Rinpoche, one of Tibetan Buddhism’s three principal reincarnations, as he sets out to gather the lost teachings of his faith and to attempt a return to his homeland. 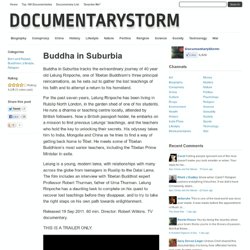 For the past seven years, Lelung Rinpoche has been living in Ruislip North London, in the garden shed of one of his students. He runs a dharma or teaching centre locally, attended by British followers. Now a British passport holder, he embarks on a mission to find previous Lelungs’ teachings, and the teachers who hold the key to unlocking their secrets. His odyssey takes him to India, Mongolia and China as he tries to find a way of getting back home to Tibet. He meets some of Tibetan Buddhism’s most senior teachers, including the Tibetan Prime Minister in exile.

Lelung is a young, modern lama, with relationships with many across the globe from teenagers in Rusilip to the Dalai Lama. The Road To Armageddon: A Spiritual Documentary (2012) At DocumentaryStorm.com we like to show you challenging videos about religion. 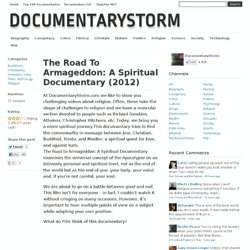 Often, these take the shape of challenges to religion and we have a muscular section devoted to people such as Richard Dawkins, Atheism, Christopher Hitchens, etc. Today, we bring you a more spiritual journey. This documentary tries to find the commonality in message between Jew, Christian, Buddhist, Hindu, and Muslim: a spiritual quest for love, and against hate. The Road to Armageddon: A Spiritual Documentary examines the universal concept of the Apocalypse on an intensely personal and spiritual level, not as the end of the world but as the end of you: your body, your mind and, if you’re not careful, your soul.

We are about to go on a battle between good and evil. What do YOU think of this documentary? The Oxycontin Express. Michael Tsarion - Origins & Oracles - Atlantis, Alien Visitation & Genetic Manipulation - 1/3. 97% Owned - Monetary Reform documentary - Queuepolitely cut. Christopher Hitchens vs Tony Blair Debate: Is Religion A Force For Good In The World? Living with Wolves. Giving Up The Green Bitch: Graham Hancock at TEDxWhitechapel.