More savage than Caravaggio: the woman who took revenge in oil. The dying man is Holofernes, an enemy of the Israelites in the Old Testament, and the young woman beheading him is Judith, his divinely appointed assassin. 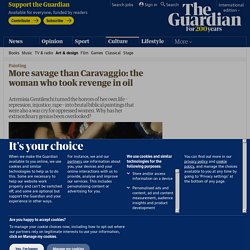 Yet at the same time he is also an Italian painter called Agostino Tassi, while the woman with the sword is Artemisia Gentileschi, who painted this. It is, effectively, a self-portrait. Two big, blood-drenched paintings of Judith and Holofernes by Gentileschi survive, one in the Capodimonte in Naples, the other in the Uffizi in Florence. They are almost identical except for small details – in Naples Judith’s dress is blue, in Florence yellow – as if this image was a nightmare she kept having, the final act to a tragedy endlessly replaying in her head. Artemisia Gentileschi - Biography & Art. Artemisia GentileschiThe Art History Archive - Biography & Art This Website is Best Viewed Using Firefox Biography of Artemisia Gentileschi: (Born July 8th 1593, Died 1653) Artemisia Gentileschi was the most important woman painter of Early Modern Europe by virtue of the excellence of her work, the originality of her treatment of traditional subjects, and the number of her paintings that have survived (though only thirty-four of a much larger corpus remain, many of them only recently attributed to her rather than to her male contemporaries). 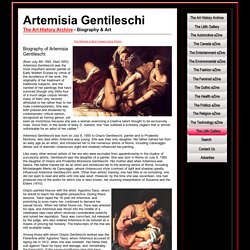 She was both praised and disdained by contemporary critical opinion, recognized as having genius, yet seen as monstrous because she was a woman exercising a creative talent thought to be exclusively male. Since then, in the words of Mary D. 10 Artworks By Caravaggio You Should Know. The Fortune-Teller. Vitale Bloch. 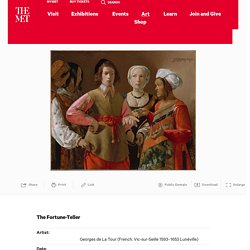 Georges de La Tour. Amsterdam, 1950, p. 74, notes that there is a "Waarzegster" (this work) in France, an early work by La Tour, and suggests it is the pendant to the "Valsespelers" ("Cheat with the Ace of Diamonds," also called the "Tricheur") in the Landry collection (now Louvre, Paris). 10 Artworks By Goya You Should Know. 10 Works By Hans Holbein The Younger You Should Know. Albrecht Dürer - 433 Artworks, Bio & Shows on Artsy. 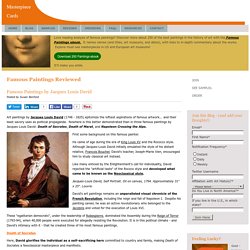 Nowhere is this better demonstrated than in three famous paintings by Jacques Louis David: Death of Socrates, Death of Marat, and Napoleon Crossing the Alps. First some background on this famous painter. He came of age during the era of King Louis XV and the Rococco style. Although Jacques-Louis David initially emulated the style of his distant relative, Francois Boucher, David's teacher, Joseph-Marie Vien, encouraged him to study classical art instead. 10 Artworks By Botticelli You Should Know. Winslow Homer - paintings, biography, quotes of Winslow Homer.

Caspar David Friedrich: The Romantic Pioneer. 10 Artworks By El Greco You Should Know. Vermeer: His best paintings and where to see them. The 10 best works by William Blake. 1 | The Angels Hovering Over the Body of Christ in the Sepulchre, c1805 This watercolour with pen and ink is one of around 80 biblical topics commissioned by Blake’s patron Thomas Butts, a civil servant. 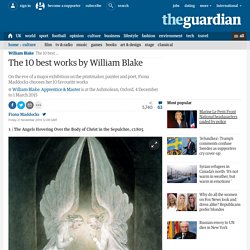 It depicts the moment Mary Magdalene visited the tomb of Jesus after the crucifixion and found two angels hovering where the body had lain. Blake’s imagery comes from the Old Testament book of Exodus, when the Israelites make a “mercy seat” flanked by golden angels. The colours are so delicate that the picture is almost monochrome. 10 Works By Delacroix You Should Know. List of 10 Famous Gustav Klimt Paintings - History Lists. Gustav Klimt (1862-1918) was the leading figure of the so-called Vienna Secession, an art movement that rebelled against the established art concepts and introduced a new style similar to Art Nouveau. 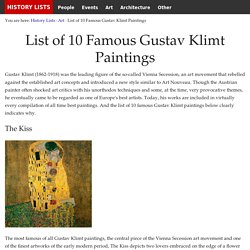 Though the Austrian painter often shocked art critics with his unorthodox techniques and some, at the time, very provocative themes, he eventually came to be regarded as one of Europe's best artists. Today, his works are included in virtually every compilation of all time best paintings. And the list of 10 famous Gustav Klimt paintings below clearly indicates why. 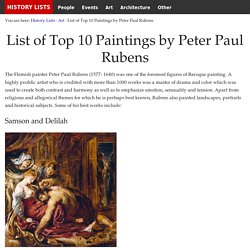 A highly prolific artist who is credited with more than 1000 works was a master of drama and color which was used to create both contrast and harmony as well as to emphasize emotion, sensuality and tension. Apart from religious and allegorical themes for which he is perhaps best known, Rubens also painted landscapes, portraits and historical subjects.

Some of his best works include: Samson and Delilah. Raphael: Paintings and Biography of Raphael. 12 Outstanding Paintings by Henri Matisse - History Lists. Henri Matisse (1869-1954), one of the most admired and respected French artists of the 20th century was the foremost figure of Fauvism, a style of painting that emerged in the early 20th century France. 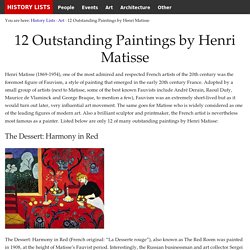 Adopted by a small group of artists (next to Matisse, some of the best known Fauvists include André Derain, Raoul Dufy, Maurice de Vlaminck and George Braque, to mention a few), Fauvism was an extremely short-lived but as it would turn out later, very influential art movement. The same goes for Matisse who is widely considered as one of the leading figures of modern art. Top 10 Van Gogh Paintings. Van Gogh created almost 900 paintings during his lifetime; however, of these paintings, a certain few continually standout as favorites among most individuals. 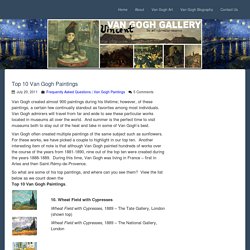 Van Gogh admirers will travel from far and wide to see these particular works located in museums all over the world. And summer is the perfect time to visit museums both to stay out of the heat and take in some of Van Gogh’s best. Paul Gauguin Paintings, Famous Gauguin Paintings. Gauguin•Paintings Click here for the Gallery of Gauguin Paintings. 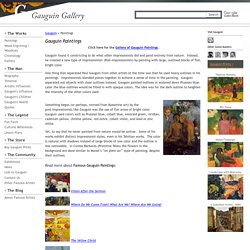 Gauguin found it constricting to do what other Impressionists did and paint entirely from nature. Instead, he created a new type of Impressionism (Post-Impressionism) by painting with large, outlined blocks of flat, bright color. One thing that separated Paul Gauguin from other artists at the time was that he used heavy outlines in his paintings. Impressionists blended pieces together to achieve a sense of time in the painting. The ten J. M. W. Turner paintings every man needs to see. Photography by J. M. W. Turner. List of 10 Claude Monet's Water Lilies - History Lists. French Impressionist painter Claude Monet (1840-1926) painted his famous Water Lilies series from the 1890s until his death in 1926.

The scene of all was a water lily garden he had created near his home in Giverny. In total, he painted some 250 Water Lilies which are today the highlights of art museums throughout the world. 20 Famous Wassily Kandinsky Paintings. 3. Autumn in Murnau, 1908 An expresionistic landscape, which already marked the slow transition into abstraction. Wassily Kandinsky was a Russian painter and art theorist and one of the most important figures in the development of modern art. He was the one who freed painting from restraints of representation and thus set the foundation for the evolution of abstraction. 10 of Velázquez’s Most Famous Paintings. Spanish painter Diego de Silva y Velázquez (1599-1660) was one of the most renowned artists of the Baroque era. In Disgraced, Emily creates a portrait of her husband, Amir, inspired by Velázquez’s Portrait of Juan de Pareja. Learn more about some of Velázquez’s masterpieces below!

1. Old Woman Frying Eggs (1618) This is one of the most famous paintings from Velázquez’s Seville period, which was the earliest stage in his development as an artist. List of 10 Most Famous Rembrandt's Paintings - History Lists. You are here: History Lists · Art · ﻿List of 10 Most Famous Rembrandt's Paintings Works of Rembrandt Harmenszoon van Rijn (1606-1669) are admired for an outstandingly realistic depiction of human emotions and feelings with all their nuances, and brilliant use of light and shadow.

The Dutch painter produced a large number of paintings (over 300 in total) but many works that were attributed to the artist for centuries are now disputed because his many followers and imitators created nearly perfect copies of his style. 10 Most Famous Leonardo Da Vinci Artworks. The 10 Most Famous Pablo Picasso Artworks.