Ancient Pottery Reveals Japanese Hunter-Gatherers’ Taste for Fish. In one of the largest studies of its kind, an international team of researchers conducted organic residue analysis of almost 800 ceramic vessels from 46 Jomon culture archaeological sites, dated to between 13,000 and 6,000 BC, in Japan to identify their contents. 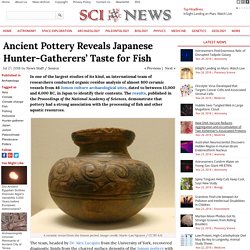 The results, published in the Proceedings of the National Academy of Sciences, demonstrate that pottery had a strong association with the processing of fish and other aquatic resources. A ceramic vessel from the Jomon period. Image credit: Marie-Lan Nguyen / CC BY 4.0. The team, headed by Dr. Jomon Pottery. The Jomon Period (c. 14,500 - c. 300 BCE) of ancient Japan produced a distinctive pottery which distinguishes it from the earlier Paleolithic Age. 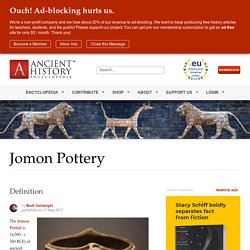 Jomon pottery vessels are the oldest in the world and their impressed decoration, which resembles rope, is the origin of the word jomon, meaning 'cord pattern'. Jomon pottery, in the form of simple vessels, was first produced c. 13,000 BCE around Shinonouchi in Nagano, making them the oldest such examples in the world. Another early production site was Odai-Yamamoto in Aomori. Jomon pottery figurines are rather later, the oldest known example being the 'Jomon Venus' which dates to c. 5000 BCE. Two general types of pottery were produced: a dark grey kind with angular edges, curved line decoration and handles which are often shaped to resemble animal heads or vessels with a reddish colour and either no decoration at all or a few wavy or zigzag lines. Pottery in Antiquity. Pottery is the first synthetic material ever created by humans. 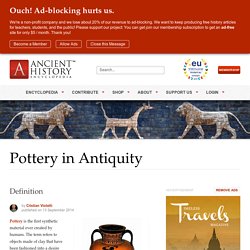 The term refers to objects made of clay that have been fashioned into a desire shape, dried, and either fired or baked to fix their form. Due to its abundance and durability, pottery is one of the most common types of items found by archaeologists during excavations, and it has the potential of providing valuable information about the human past. Clay is abundant, cheap, and adaptable, which makes it convenient for human exploitation. Because usable clay is widely available, pottery was independently invented in many parts of the world at different times. The earliest recorded evidence of clay usage dates back to the Late Palaeolithic period in central and western Europe, where fired and unfired clay figurines were created as a form of artistic expression. The introduction of pottery generally coincides with the adoption of an agricultural lifestyle, when durable and strong vessels and containers are needed.

Brief History of Ceramics and Glass. Ceramics is one of the most ancient industries going back thousands of years. 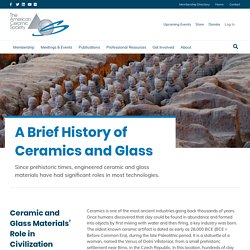 Once humans discovered that clay could be found in abundance and formed into objects by first mixing with water and then firing, a key industry was born. The oldest known ceramic artifact is dated as early as 28,000 BCE (BCE = Before Common Era), during the late Paleolithic period. The Elements of Art by Art Heroes. The Principles of Design by Art Heroes. Children absorbed in iPads don't notice parents being swapped with strangers. When children are playing games on their iPads or iPhones, they completely block out the world around them. 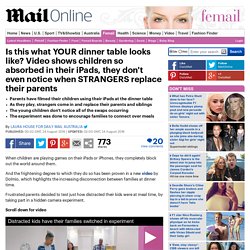 As art teachers, we want our students to be capable and confident creative thinkers. 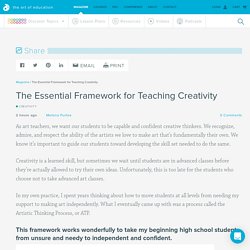 We recognize, admire, and respect the ability of the artists we love to make art that’s fundamentally their own. We know it’s important to guide our students toward developing the skill set needed to do the same. Creativity is a learned skill, but sometimes we wait until students are in advanced classes before they’re actually allowed to try their own ideas. Elements and Principles of design.

The Most Famous... How to Deal with the Idea of Appropriation in the Art Room - The Art of Ed. Appropriation is a complex topic for art teachers to navigate. 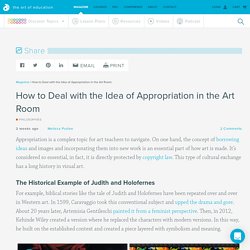 On one hand, the concept of borrowing ideas and images and incorporating them into new work is an essential part of how art is made. It’s considered so essential, in fact, it is directly protected by copyright law. This type of cultural exchange has a long history in visual art. The Historical Example of Judith and Holofernes For example, biblical stories like the tale of Judith and Holofernes have been repeated over and over in Western art. A Developing Societal Awareness On the other hand, we have a developing societal awareness of cultural appropriation.

Cultural appropriation involves the exploitation of one group’s culture or history by another. Model Karlie Kloss walked the runway in lingerie accessorized with turquoise jewelry and a full-length Native American war bonnet. She writes, “For one, Ms. Is There a Middle Ground? The tricky part is the gray area in the middle.

Cultural Destruction - Who Owns Art? September 11th Attacks: The Story of the Falling Man Photo. Digital transformation: are you ready for exponential change? Futurist Gerd Leonhard, TFAStudios. Mike Rowe on the problem with emojis. ART ONE 2015-2016. ADVANCED ART 2015-2016. Interesting Things. Mission/Vision Examples. The Benefits of No-Tech Note Taking. The moment of truth for me came in the spring 2013 semester. 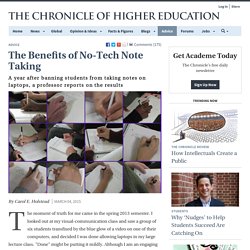 I looked out at my visual-communication class and saw a group of six students transfixed by the blue glow of a video on one of their computers, and decided I was done allowing laptops in my large lecture class. "Done" might be putting it mildly. Although I am an engaging lecturer, I could not compete with Facebook and YouTube, and I was tired of trying. The next semester I told students they would have to take notes on paper. Period. I knew that eliminating laptops in my classroom would reduce distractions. Some of the students I teach are journalism majors. In laying down my no-tech note-taking decree, I explained that it would help students engage in the lectures and also pay off later in their careers. It turned out my theory was right and now is supported by research. In one study, students were tested 30 minutes after the lecture.