Vivian Maier and the Problem of Difficult Women. Exhibitions - Vivian Maier - Artists - Jackson Fine Art - Photography - Atlanta. The Strange Case Of Vivian Maier. Not a new story but still a spectacular one. 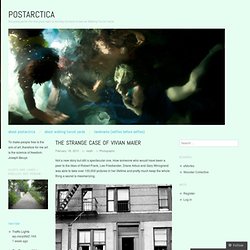 How someone who would have been a peer to the likes of Robert Frank, Lee Friedlander, Diane Arbus and Gary Winogrand was able to take over 100,000 pictures in her lifetime and pretty much keep the whole thing a secret is mesmerizing. Sept 28, 1959, 108th St. Anthony Lane: “Finding Vivian Maier” and “The French Minister” Reviews. Tall, awkward, and heavily shod, Vivian Maier was a nanny. 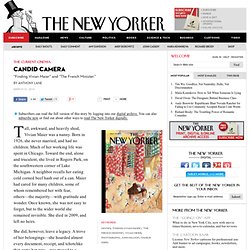 Born in 1926, she never married, and had no children. Much of her working life was spent in Chicago. Toward the end, alone and truculent, she lived in Rogers Park, on the southwestern corner of Lake Michigan. A neighbor recalls her eating cold corned beef hash out of a can. Maier had cared for many children, some of whom remembered her with fear, others—the majority—with gratitude and wonder. To Deepen the Mystery: The Self-Portaits of Vivian Maier.

The photography of Vivian Maier - in pictures. Vivian Maier's extraordinary photographs of Chicago - feature. The story of Vivian Maier is so incredible that the man who discovered her says: "If you made this up for Hollywood it would be like, 'Oh, come on, that's too hard to believe.' She is," he adds, "the most riveting person I have ever encountered. 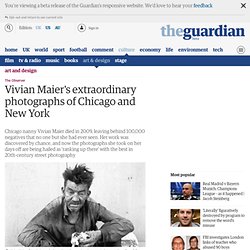 " This is 29-year-old John Maloof, a former estate agent from Chicago who has devoted the last four years to unravelling Maier's story. His obsession began in 2007, the year he placed a $400 bid on a box of old negatives in an auction, hoping they might be useful for a book on Chicago's history that he was co-authoring. "Nothing was pertinent for the book so I thought: 'Well, this sucks, but we can probably sell them on eBay or whatever.'" It was only when the book was finished a few months later that he looked at the negatives again and slowly realised he was in possession of something unimaginably precious.

They had no idea, though, that their nanny spent her days off taking some of the most extraordinary images of the 20th century. “Inventing Vivian Maier” by Abigail Solomon-Godeau. Version française First she was found, as announced in the title of one of the two documentary films about her (Finding Vivian Maier), but now it can be justly said her life now requires posthumous invention. 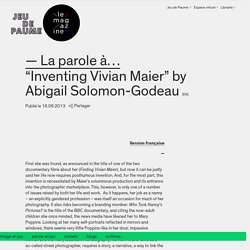 And, for the most part, this invention is necessitated by Maier’s voluminous production and its entrance into the photographic marketplace. This, however, is only one of a number of issues raised by both her life and work. As it happens, her job as a nanny – an explicitly gendered profession – was itself an occasion for much of her photography. It also risks becoming a branding moniker: Who Took Nanny’s Pictures? New doc exposes photo-snapping nanny Vivian Maier.

Five years ago, hell, make that two, no one knew Vivian Maier from Vivian Vance. 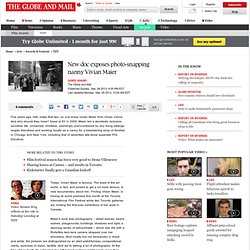 And why should they have? The Secret City of Vivian Maier. The Best Street Photographer You've Never Heard Of. Vivian Maier/John Maloof Collection IT'S IMPOSSIBLE TO TAKE measure of Vivian Maier's photos without taking stock of her story. 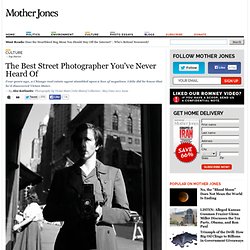 She was by all accounts remarkably private, someone who didn't always enjoy the company of other adults. And yet her photographs feel like a celebration of people—a celebration of what Studs Terkel, the late grand oral historian, liked to call "the etceteras" of the world. (One photography scholar I spoke with suggested Terkel and Maier would have made a formidable pair, like James Agee and Walker Evans.) Her subjects are often caught looking directly at the camera, apparently making eye contact with Maier, but she used a Rolleiflex, a box-shaped camera that requires the photographer to look downwards through the viewfinder.

Finding Vivian Maier - Official Movie Trailer. VIVIAN MAIER: “STREET PHOTOGRAPHS” The Still Unfolding Legend of Vivian Maier. Vivian Maier's Muse. When the amateur photographer Vivian Maier died in 2009, she left behind more than 120,000 negatives and, promising even greater discoveries, 2,000 undeveloped rolls of film, some of which sat untouched for more than 45 years. 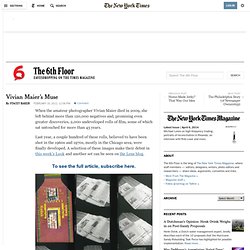 Last year, a couple hundred of these rolls, believed to have been shot in the 1960s and 1970s, mostly in the Chicago area, were finally developed. A selection of these images make their debut in this week’s Look and another set can be seen on the Lens blog. Book Review: Vivian Maier, Street Photographer. PowerHouse Books, 2011. $39.95 Foreword by Geoff Dyer. 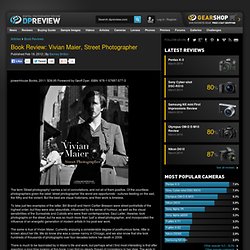 ISBN: 978-1-57687-577-3 The term 'Street photography' carries a lot of connotations, and not all of them positive. Of the countless photographers given the label 'street photographer' the worst are opportunists - vultures feeding on the sad, the filthy and the violent. But the best are visual historians, and their work is timeless. To take just two examples of the latter, Bill Brandt and Henri Cartier-Bresson were street portraitists of the highest order, but they were also absurdists, influenced by the sense of humour, as well as the visual sensibilities of the Surrealists and Cubists who were their contemporaries. The same is true of Vivian Maier. There is much to be fascinated by in Maier’s life and work, but perhaps what I find most interesting is that after spending a long time looking at this book, I can find no steady thread of consistency in her style. Photos From Jeff Goldstein's Vivian Maier Collection. 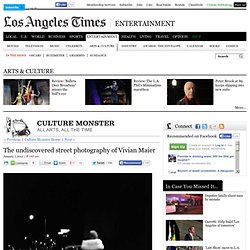 He was searching for photos for a book project about his Chicago neighborhood of Portage Park. In a moment straight out of an episode of "Auction Hunters," Maloof discovered a treasure-trove of thousands of negatives that turned out to be from a nanny who took up street photography in her spare time yet kept most of her work hidden. The photographer was Vivian Maier. After scanning a few of the images Maloof quickly realized he stumbled onto something remarkable.

He created a blog seeking expert opinion and feedback on her photos. More than 100 of her photographs are on display at "Vivian Maier — A Life Discovered: Photographs From the Maloof Collection" at the Merry Karnowsky Gallery in L.A. He initially read about Maier in the Guardian newspaper and checked out Maloof's website. Vivian Maier was born in 1926 in New York City to a French mother and Austrian father.