Find your perfect Leica or M-mount film camera with the help of this interactive tool & reference data. Choosing the right camera can be complicated and the Leica M film camera system — along with extended M-mount camera options from other manufacturers — provides layer upon layer of occasionally muddy and confusing options options. 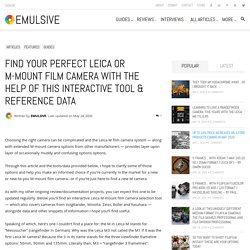 Through this article and the tools/data provided below, I hope to clarify some of those options and help you make an informed choice if you’re currently in the market for a new or new-to-you M-mount film camera…or if you’re just here to find a new M camera. As with my other ongoing review/documentation projects, you can expect this one to be updated regularly. Below you’ll find an interactive Leica M-mount film camera selection tool — which also covers cameras from Voigtlander, Minolta, Zeiss, Rollei and Yasuhara — alongside data and other snippets of information I hope you’ll find useful. The Chinese government bans the word "Leica" from social media - Leica Rumors.

The latest short film from F/Nazca Saatchi & Saatchi: "Leica - The Hunt" I posted here on the blog a few days ago made the Chinese government ban the word "Leica" from social media... because the video shows the famous “Tank Man” photo taken in Tiananmen Square: Reuters writes: The hashtag “Leica insulting China” surfaced on China’s Twitter-like Weibo late on Thursday, before being censored. 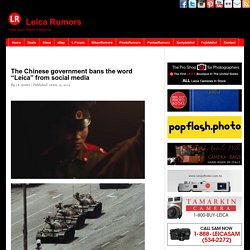 Users left hundreds of comments on Leica’s official Weibo account criticizing the company for the video. “Get out of China, you are done,” one user posted.Others cheered the video as daring ahead of the 30th anniversary of the crackdown on June 4, but the majority of posts were scrubbed from Chinese social media by Friday and the comments section on two of its most recent Weibo posts were disabled.Users were also prevented from posting messages using Leica’s English or Chinese name with warnings that they were violating laws, regulations or the Weibo community guidelines.

M3. M7. NT Photoworks – Kodak Double-X 5222 Approx 27 Exposures. Leica - Camera-wiki.org - The free camera encyclopedia. Company Leica Camera AG is a leading German optical company that has been designing and developing 35 mm cameras since 1913, and manufacturing them in series production since 1925. 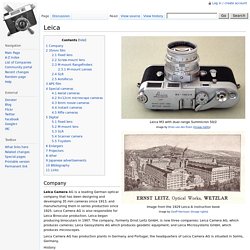 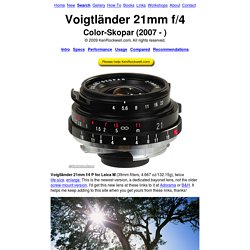 All rights reserved. Intro Specs Performance Usage Compared Recommendations Voigtländer 21mm f/4 P for Leica M (39mm filters, 4.667 oz/132.15g), twice life-size. enlarge. This is the newest version, a dedicated bayonet lens, not the older screw-mount version. Oak, Carmel Valley, California. enlarge. Example Photo Gallery: Monterey (June 2009). Price Guide 2012/13 -Leica Repairs. A Look Back at 100 Years of Leica Cameras. Why I’ve Gone Back To Shooting Film...And Why You Should Too. Our DSLRs have confused us. We obssess over the wrong things. Sharpness at 400%; bokeh characteristics of lenses produced from what-must-surely-be prancing magical unicorns; high speed burst frame rates that make cameras sound like gatling guns; 4k resolution to shoot better cat videos; 100 auto focus points that still won’t focus on what we need them to; and noise performance at 400,000 ISO.

Absolutely none of these will make your photographs better. Shooting film will though, here's why. Last month, I bought my first film camera in a decade. I grew up shooting film as a kid and we actually had an attic darkroom, thanks to my dad’s hobbyist photographer leanings. What on earth am I actually talking about here? Ok I’m being somewhat ridiculous, but I’m sure some of you out there in the back row are nodding in solidarity and agreement. It’s not just me that feels this way. Is Film The Answer? Film is just the medium. 1.) 2.) "What on earth is he smoking? " 3.) The Rise, Near Demise, and Rebirth of the Leica Camera. Leica made its name a very long time ago by creating the first practical 35mm camera to use standard cinema 35mm film. 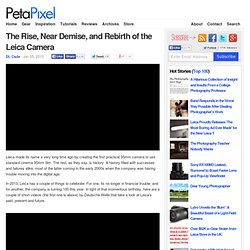 The rest, as they say, is history. A history filled with successes and failures alike, most of the latter coming in the early 2000s when the company was having trouble moving into the digital age. In 2013, Leica has a couple of things to celebrate. For one, its no longer in financial trouble; and for another, the company is turning 100 this year.

In light of that momentous birthday, here are a couple of short videos (the first one is above) by Deutsche Welle that take a look at Leica’s past, present and future. In 2004, Leica was snatched from the brink of bankruptcy by Andreas Kaufmann. Whatever the case may be, what he’s done has worked and worked well. Info : Guillaume Gilbert. Ode to a legend. Platinum Palladium Printing with Leica M Monochrom. A Critic at Large: Candid Camera. Fifty miles north of Frankfurt lies the small German town of Solms. 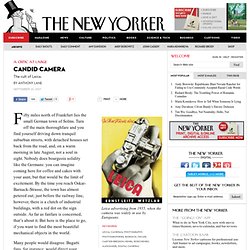 Turn off the main thoroughfare and you find yourself driving down tranquil suburban streets, with detached houses set back from the road, and, on a warm morning in late August, not a soul in sight. Nobody does bourgeois solidity like the Germans: you can imagine coming here for coffee and cakes with your aunt, but that would be the limit of excitement.

By the time you reach Oskar-Barnack-Strasse, the town has almost petered out; just before the railway line, however, there is a clutch of industrial buildings, with a red dot on the sign outside. As far as fanfare is concerned, that’s about it. The world’s greatest gadget. Happy 100th birthday, Leica! Henri Cartier-Bresson with his trusty Leica in 1957. 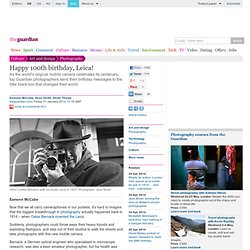 Photograph: Jane Bown Eamonn McCabe Now that we all carry cameraphones in our pockets, it's hard to imagine that the biggest breakthrough in photography actually happened back in 1914 – when Oskar Barnack invented the Leica. Suddenly, photographers could throw away their heavy tripods and exploding flashguns, and step out of their studios to walk the streets and take photographs with this new mobile camera. Barnack, a German optical engineer who specialised in microscope research, was also a keen amateur photographer, but his health was poor and he couldn't carry the heavy cameras of the time. William Eggleston, Untitled, 1970-1973 [From Chromes] Photograph: courtesy of The Eggleston Artistic Trust.

Anyone who is anyone in photography has used the "miniature miracle", as it was known at the time – from Henri Cartier-Bresson to Robert Capa, Magnum's great war photographer.