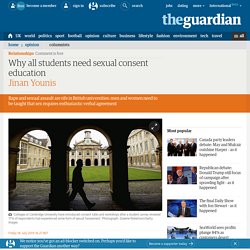 There’s the idea that if you wear sexy clothing you’re asking for it; that silence during a sex act equals consent; and that women are always falsely accusing men of sexual assault and rape. Surveys have shown that one in two boys and one in three girls think it is OK to sometimes hit a woman or force her to have sex. All of which suggests a new approach is necessary. We need to teach young women and men about affirmative, enthusiastic and informed consent. This year colleges at Cambridge University have introduced consent talks and workshops after a student survey revealed 77% of respondents had experienced some form of sexual harassment. The introduction of consent education in Cambridge sparked controversy among students. How to correctly manage allegations against staff - Education Law From Browne Jacobson. Cuts-send-rates-of-mental-health-disorders-among-young-soaring-9392996. 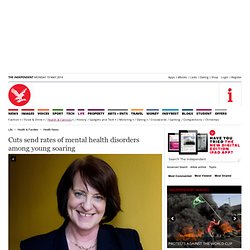 In written evidence to the Health Select Committee, which is holding an inquiry into the Children’s and Adolescent Mental Health Service (CAMHS), she said: “It cannot be coincidental that the increasing concerns about child and adolescent mental health coincides with the biggest reconfiguration of health and social care services, reductions in preventative and early intervention budgets and local CAMHS budgets and therefore spending, in a generation.” Privatise child protection services, Department for Education proposes.

A letter signed by 37 senior social services figures and published in the Guardian says child protection is too important to be left to the 'fickleness and failings of the market. 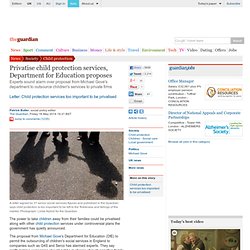 Photograph: Linda Nylind for the Guardian The power to take children away from their families could be privatised along with other child protection services under controversial plans the government has quietly announced. Happiness and productivity. What's the best way to ensure that your employees become more productive? 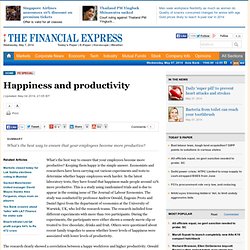 Keeping them happy is the simple answer. Economists and researchers have been carrying out various experiments and tests to determine whether happy employees work harder. In the latest laboratory tests, they have found that happiness made people around 12% more productive. This is a study using randomised trials and is due to appear in the coming issue of The Journal of Labour Economics. The study was conducted by professor Andrew Oswald, Eugenio Proto and Daniel Sgroi from the department of economics at the University of Warwick, UK, who led the research teams. The research clearly showed a correlation between a happy workforce and higher productivity. Teacher sacked after calling pupils ‘feral’ on Twitter.

Salvation Army refused to believe child abuse complaints, commission told. I-am-fat-worthless-and-ugly-the-diary-entries-of-ballet-dancer-tallulah-wilson-who-died-after-being-hit-by-a-train-9059278. In a private diary by Tallulah Wilson discovered by transport police, she had reportedly written: “I am fat” on one page, with “what am I? 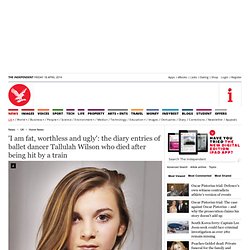 You are nothing” on another. One page simply read: “fat”. St Pancras Coroner’s Court in north London heard how in a separate document the teenager, who was hit by a train at St Pancras station in October 2012, had repeatedly written the word “worthless”, with the word “ugly” inked largely on the following page. The senior Coroner for Inner London North, Mary Hassell, told the jury at the inquest: “I presume you will have seen a photograph of Tallullah - a very lovely looking young woman.” Give a Little Piece of Yourself. 10 Symptoms of Asperger’s Syndrome: Know the Signs. Asperger’s syndrome is part of the autism spectrum disorder, also known as ASD. 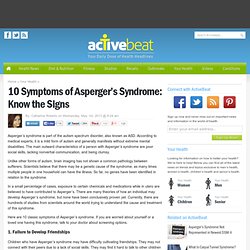 According to medical experts, it is a mild form of autism and generally manifests without extreme mental disabilities. The main outward characteristics of a person with Asperger’s syndrome are poor social skills, lacking nonverbal communication, and being clumsy. Unlike other forms of autism, brain imaging has not shown a common pathology between sufferers. Scientists believe that there may be a genetic cause of the syndrome, as many times multiple people in one household can have the illness. So far, no genes have been identified in relation to the syndrome. Taylor Mali on "What Teachers Make" One Of My Favorite Authors Says There's Something We Should Remove From All Classrooms.

Bully Calls News Anchor Fat, News Anchor Destroys Him On Live TV. Jackson Katz: Violence against women—it's a men's issue. Use of ADHD drugs 'increases by 50% in six years' 13 August 2013Last updated at 04:24 ET Common symptoms of ADHD include inattentiveness, hyperactivity and impulsiveness There has been a 50% rise in England in the use of drugs for attention deficit hyperactivity disorder in six years. 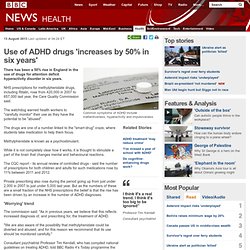 NHS prescriptions for methylphenidate drugs, including Ritalin, rose from 420,000 in 2007 to 657,000 last year, the Care Quality Commission said. The watchdog warned health workers to "carefully monitor" their use as they have the potential to be "abused". The drugs are one of a number linked to the "smart-drug" craze, where students take medication to help them focus. Methylphenidate is known as a psychostimulant. Continue reading the main story. If This Is How The Nice Kids Think, Imagine How The Not-So-Nice Ones Feel. Www.boystomenproject.com. Real or Perceived Attacks on Self Esteem. The Four Rooms. 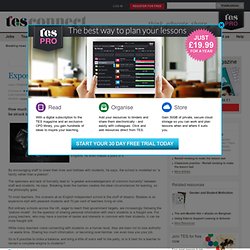 #NSPCC The story of Jay - short video on sexual exploitation and relationships. Could be used as part of #childprotection training or discussion. 300,000 more children in absolute poverty than last year - and it's likely to get worse. Child poverty has risen and looks set to keep rising. 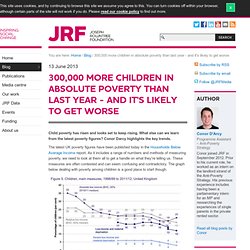 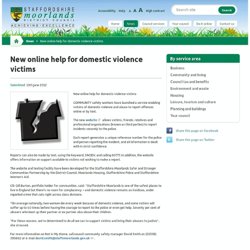 The new website allows victims, friends, relatives and professional organisations (known as third parties) to report incidents securely to the police. Each report generates a unique reference number for the police and person reporting the incident, and all information is dealt with in strict confidence. Reports can also be made by text, using the keyword, SNODV, and calling 60777.

In addition, the website offers information on support available to victims not wishing to make a report. The website and texting facility have been developed for the Staffordshire Moorlands Safer and Stronger Communities Partnership by the District Council, Moorlands Housing, Staffordshire Police and Staffordshire Women’s Aid.

Daniel Pelka murder case: Parents 'deliberately starved son' 3 June 2013 Last updated at 18:17 GMT Daniel Pelka died from a brain injury after months of being starved, the court heard. Justice system must ensure wellbeing of prisoners' children, say campaigners. Children’s welfare should be considered at every stage of the criminal justice system when their parents are facing detention or imprisonment, a group of charities is urging. State should have "duty of care" to prisoners' children Action for Prisoners’ Families and the Prison Advice & Care Trust (Pact) said the current system places children’s welfare at risk. Leadership - Be friendly, but don't be friends - resources. Last Updated: 28 May, 2013 Section: resources As a leader you must establish some distance socially from the teachers you manage.

GRAHAM STUART AND GOVERNMENT POLICY ON CAREERS ADVICE IN SCHOOLS « Montrose42's Blog. Angela Lee Duckworth: The key to success? Grit. How to Motivate the Unmotivated. The Power of Educational Coaching. Punish or Restore? Restorative Processes for Learning Organisations. We’ve heard a lot this week about the number of cases where an apology has effectively closed the issue. How Mediation Works. School exclusion: Regulations and statutory guidance from September 2012 - About the Department.