Introducing the Smalltalk Zoo - CHM. 48 Years of Smalltalk History at CHM In commemoration of the 40th anniversary of the release of Smalltalk-80, the Computer History Museum is proud to announce a collaboration with Dan Ingalls to preserve and host the “Smalltalk Zoo.” 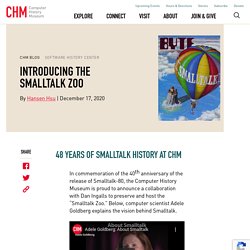 Below, computer scientist Adele Goldberg explains the vision behind Smalltalk. What is Smalltalk, and what is the Smalltalk Zoo? The Smalltalk Zoo is a collection of historical versions of the revolutionary graphical programming and user environment Smalltalk, originally developed at Xerox PARC, ranging from the 1972 version all the way to the modern “Squeak” version whose development began in 1995. These emulated Smalltalk environments run in your web browser and are hosted by CHM at smalltalkzoo.thechm.org. Screenshot of Smalltalk-74 on a Xerox Alto computer. Smalltalk was a revolutionary system developed by the Learning Research Group (LRG) at Xerox PARC in the 1970s, led by Alan Kay. Children animating horses in Smalltalk-72 on an Alto computer. Alan C. Opinion So much of retirement planning is wishful thinking what I’ve learned after 3 years of actually being retired. Before we continue... - The Lily.

Selling My Bootstrapped SaaS Business - Tyler Tringas. Five years ago I built and launched the first version of a SaaS app on a single flight from San Francisco to Buenos Aires. 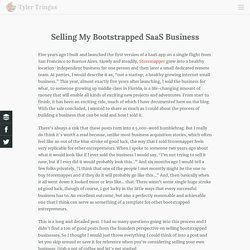 Slowly and steadily, Storemapper grew into a healthy location-independent business for one person and then later a small dedicated remote team. At parties, I would describe it as, “not a startup; a healthy growing internet small business.” This year, almost exactly five years after launching, I sold the business for what, to someone growing up middle class in Florida, is a life-changing amount of money that will enable all kinds of exciting new projects and adventures. From start to finish, it has been an exciting ride, much of which I have documented here on the blog. With the sale concluded, I wanted to share as much as I could about the process of building a business that can be sold and how I sold it.

There’s always a risk that these posts turn into a 5,000-word humblebrag. This is a long and detailed post. First the obvious: why sell your software business? The ecologist who wants to map everything. Thomas Crowther bursts barefoot from his office into the corridor, sweating through his faded T-shirt and grinning with exhilaration. 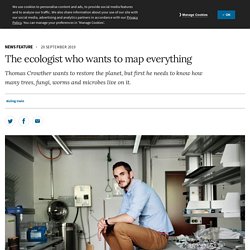 It’s a warm July day and he has just finished telling NBC News that Earth could sustain another 1.2 trillion trees, which would absorb 200 gigatonnes of carbon, and that the next thing to do is to “stop talking and start planting”. His claim, based on figures published that day in Science1, comes from the latest in a string of high-profile ecology papers from his laboratory at the Swiss Federal Institute of Technology in Zurich (ETH Zurich) that have drawn the attention of the world’s media — and Crowther is loving it. Publicity, he believes, will get him closer to his goal, and his goal is nothing less than restoring the planet. At 33, Crowther has risen from struggling student to steward of a 30-strong team with a multimillion-euro grant that should keep his lab going for 13 years — rare stability in a world of short funding cycles.

Big ecology. CICP 2018 Annual Report WEB FINAL. Economics Departments, Institutes and Research Centers in the World. Americans Are Having Fewer Babies. They Told Us Why. Barcelona as a smart city.

The Fall and Rise of Global Cities. This site publishes high-touch, time-intensive data visualizations (and has a business that sustains it) Over 7,000 artists played in the New York City area in 2013. 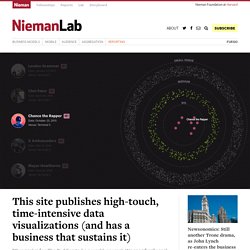 Only 21 of those later made it, really made it, headlining at a venue with an over 3,000-person capacity — among them, bigger names like Chance the Rapper, X Ambassadors, Sam Smith, and Sylvan Esso. I learned this sort of random but fascinating tidbit from a data visualization titled “The Unlikely Odds of Making it Big,” from the site The Pudding. The Pudding is the home to high-touch, painstakingly crafted data visualizations — what the site calls “visual essays” — that are distinct in their obsessive complexity over points of cultural curiosity.

Most pieces stand wholly apart from the U.S. news cycle; no anxiety-inducing interactives around budget, taxes, health care. Want to see everywhere jazz legend Miles Davis is mentioned across Wikipedia, and how he’s connected to other people, recordings, and places? “We’re all over the map. Our story backlog is now totally open again. John Cleese on 5 Factors to Make Your Life More Creative. Programming your mind for success.