Existential anxiety: between faith and despair. Anxiety is one of the most common medical conditions today affecting about 20 percent of the population. 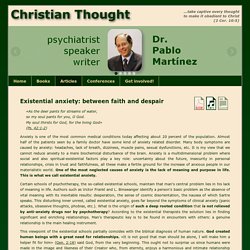 Almost half of the patients seen by a family doctor have some kind of anxiety related disorder. Many body symptoms are caused by anxiety: headaches, lack of breath, dizziness, muscle pains, sexual dysfunctions, etc. It is my view that we cannot reduce anxiety to a mere biochemical disturbance of the brain. Anxiety is a multidimensional problem where social and also spiritual-existential factors play a key role: uncertainty about the future, insecurity in personal relationships, crisis in trust and faithfulness, all these make a fertile ground for the increase of anxious people in our materialistic world. Anxiety More Common in the Western World, Depression in East. By Traci Pedersen Associate News Editor Reviewed by John M. 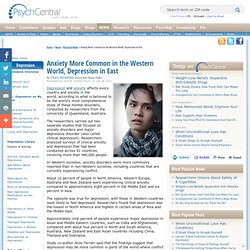 Grohol, Psy.D. on July 26, 2012 Depression and anxiety affects every country and society in the world, according to what is believed to be the world’s most comprehensive study of these mental disorders, conducted by researchers from the University of Queensland, Australia. The researchers carried out two separate studies that focused on anxiety disorders and major depressive disorder (also called clinical depression). Researchers analyzed surveys of clinical anxiety and depression that had been conducted across 91 countries, involving more than 480,000 people. The Concept of Anxiety. All of Kierkegaard's books have either a preface, dedication, or prayer at the beginning. 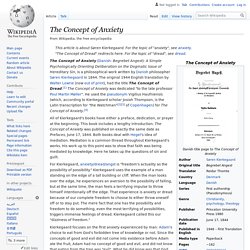 This book includes a lengthy introduction. The Concept of Anxiety was published on exactly the same date as Prefaces, June 17, 1844. Both books deal with Hegel’s idea of mediation. Mediation is a common thread throughout Kierkegaard’s works. His work up to this point was to show that faith was being mediated by knowledge. For Kierkegaard, anxiety/dread/angst is unfocused fear. Kierkegaard focuses on the first anxiety experienced by man: Adam's choice to eat from God's forbidden tree of knowledge or not. However, Kierkegaard mentions that anxiety is a way for humanity to be saved as well. Progress[edit] In 1793, forty-one years before Kierkegaard wrote The Concept of Anxiety, Immanuel Kant wrote his book Religion Within the Limits of Reason Alone; his book elevated reason in the realm of Christianity.[7] Many continental philosophers wrote their books in relation to Kant's ideas.

Are child and adolescent mental health problems increasing in the 21st century? A systematic review. Mater Research - Dr William Bor finds teenage depression and anxiety on the rise. Following three years of investigation, Mater Research’s Dr William Bor has published research in the Australian and New Zealand Journal of Psychiatry which indicates that teenagers, particularly girls, are experiencing significantly higher rates of depression and anxiety this century compared to last. 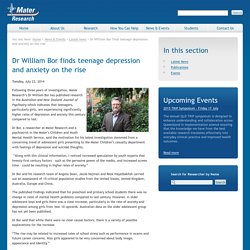 Dr Bor, a researcher at Mater Research and a psychiatrist in the Mater’s Children and Youth Mental Health Service, said the motivation for his latest investigation stemmed from a concerning trend of adolescent girls presenting to the Mater Children’s casualty department with feelings of depression and suicidal thoughts. “Along with this clinical information, I noticed increased speculation by youth experts that twenty-first century factors – such as the pervasive power of the media, and increased screen time – could be resulting in higher rates of anxiety.” Dr Bor said that while there were no clear causal factors, there is a variety of possible explanations for the increase. 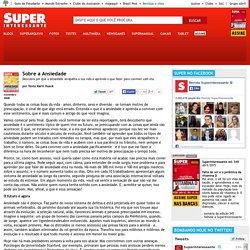 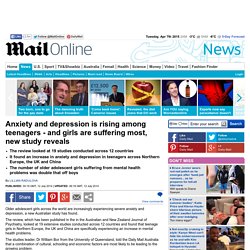 The review, which has been published in the in the Australian and New Zealand Journal of Psychiatry, looked at 19 extensive studies conducted across 12 countries and found that teenage girls in Northern Europe, the UK and China are specifically experiencing an increase in mental health problems. The studies leader, Dr William Bor from the University of Queensland, told the Daily Mail Australia that a combination of cultural, schooling and economic factors are most likely to be leading to the growing problem. Angst. Angst means fear or anxiety (anguish is its Latinate equivalent, and anxious, anxiety are of similar origin). 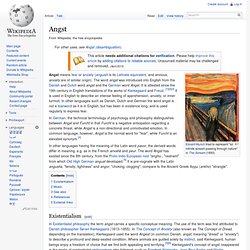 The word angst was introduced into English from the Danish and Dutch word angst and the German word Angst.