Sciencerach. A revolutionary insulin patch invented by researchers from the University of North Carolina and NC State can possibly make painful insulin injections a thing of the past. 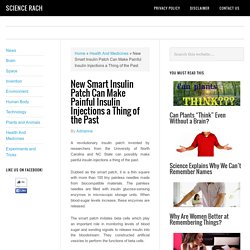 Dubbed as the smart patch, it is a thin square with more than 100 tiny painless needles made from biocompatible materials. The painless needles are filled with insulin glucose-sensing enzymes in microscopic storage units. When blood-sugar levels increase, these enzymes are released. The smart patch imitates beta cells which play an important role in monitoring levels of blood sugar and sending signals to release insulin into the bloodstream. They constructed artificial vesicles to perform the functions of beta cells. What’s even more interesting is that the patch is smart enough that it can be personalized depending on the user’s diabetic weight and sensitivity to insulin.

The researchers tested the patch on mice and found that it lowered blood glucose for up to 9 hours. Sponsored Links Share your Thoughts. What is HbA1c? - Definition, Units, Conversion, Testing & Control. HbA1c forms when haemoglobin joins with glucose in the blood HbA1c is a term commonly used in relation to diabetes. 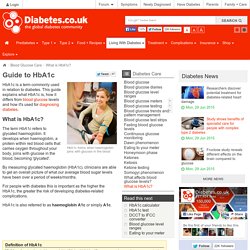 This guide explains what HbA1c is, how it differs from blood glucose levels and how it's used for diagnosing diabetes. What is HbA1c? The term HbA1c refers to glycated haemoglobin. It develops when haemoglobin, a protein within red blood cells that carries oxygen throughout your body, joins with glucose in the blood, becoming 'glycated'. By measuring glycated haemoglobin (HbA1c), clinicians are able to get an overall picture of what our average blood sugar levels have been over a period of weeks/months.

For people with diabetes this is important as the higher the HbA1c, the greater the risk of developing diabetes-related complications. HbA1c is also referred to as haemoglobin A1c or simply A1c. How does HBA1c return an accurate average measurement of average blood glucose? When the body processes sugar, glucose in the bloodstream naturally attaches to haemoglobin. Natural Pain Remedies from Your Kitchen - iVillage. 22 Motivational Pictures To Get You Off Your Ass : DormStormer. Top Tech on the Horizon 2014: Diabetes Forecast Magazine. Poison Spectrum from Hell. How To Eat Healthy When You Have Diabetes {Guest Post} Cinnamon: Help for Insulin Resistance and Weight Loss.

By Mary Shomon If you think cinnamon is simply something to sprinkle on your cookies or cappuccino, think again. 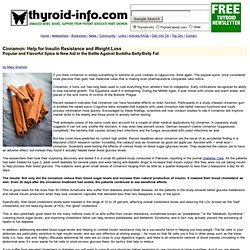 The popular spice, once considered more precious than gold, has medicinal value that is making even pharmaceutical companies take notice. Cinnamon, it turns out, has long been used to cure everything from athlete’s foot to indigestion. Early civilizations recognized its ability to stop bacterial growth. The Egyptians used it in embalming.

Recent research indicates that cinnamon can have favorable effects on brain function. That antiseptic power of the spice could also account for a couple of other medical applications for cinnamon. But few could have predicted its current high profile. The researchers then took their surprising discovery and tested it in a small 60 patient study conducted in Pakistan, reporting in the journal Diabetes Care. This is good news for the more than 50 million Americans who suffer from diabetes and/or heart disease. Using Cinnamon Mary’s Experience. 12 Powerfoods : Diabetes : Men's Health Spotlight. Can controlling your blood sugar and preventing diabetes complications be as simple as eating the right foods? 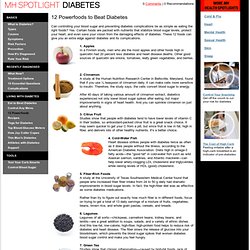 Yes. Certain foods are packed with nutrients that stabilize blood sugar levels, protect your heart, and even save your vision from the damaging effects of diabetes. These 12 foods can give you an extra edge against diabetes and its complications. 1. Apples In a Finnish study, men who ate the most apples and other foods high in quercetin had 20 percent less diabetes and heart disease deaths. 2. After 40 days of taking various amount of cinnamon extract, diabetics experienced not only lower blood sugar spikes after eating, but major improvements in signs of heart health. 3. 4. 5.

Rather than try to figure out exactly how much fiber is in different foods, focus on trying to get a total of 13 daily servings of a mixture of fruits, vegetables, beans, brown rice, and whole grain pastas, cereals, and breads. 12 Powerfoods : Diabetes : Men's Health Spotlight.