FrontPage - Raspbian. Raspbian is a free operating system based on Debian optimized for the Raspberry Pi hardware. 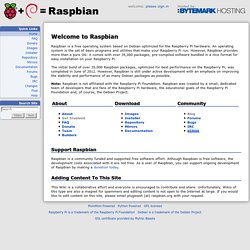 An operating system is the set of basic programs and utilities that make your Raspberry Pi run. However, Raspbian provides more than a pure OS: it comes with over 35,000 packages, pre-compiled software bundled in a nice format for easy installation on your Raspberry Pi. The initial build of over 35,000 Raspbian packages, optimized for best performance on the Raspberry Pi, was completed in June of 2012. However, Raspbian is still under active development with an emphasis on improving the stability and performance of as many Debian packages as possible. Life of RPi, using svxlink as Echolink node in RPi. This article is the English Edition of my Blog article, hope to share my experience to the ham all over the world. 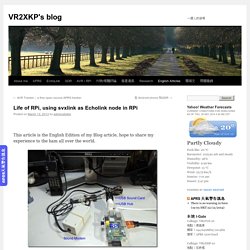 What is Echolink Simply to say, the Echolink via the Internet connection across the world to link up the ham radio station together. The technology used on Internet connection is VoIP, and the reset is the traditional method. Topology of Echolink network (courtesy of K1RA Power point) The mode of Echolink operation: PC to PC The ham use the Echolink software installed on the PC to communicate to each other. Courtesy of K1RA Power point Sys Op Mode The Ham communicates between PC and transreceiver. 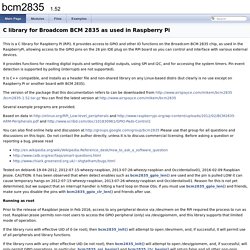 It provides access to GPIO and other IO functions on the Broadcom BCM 2835 chip, as used in the RaspberryPi, allowing access to the GPIO pins on the 26 pin IDE plug on the RPi board so you can control and interface with various external devices. It provides functions for reading digital inputs and setting digital outputs, using SPI and I2C, and for accessing the system timers.

Pin event detection is supported by polling (interrupts are not supported). Download & Install. WiringPi is now maintained under GIT for ease of change tracking, however there is a Plan B if you’re unable to use GIT for whatever reasons (usually your firewall will be blocking you, so do check that first!) 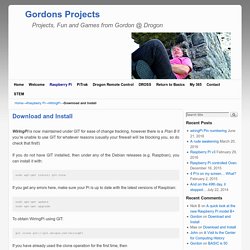 If you do not have GIT installed, then under any of the Debian releases (e.g. Raspbian), you can install it with: sudo apt-get install git-core If you get any errors here, make sure your Pi is up to date with the latest versions of Raspbian: sudo apt-get update sudo apt-get upgrade To obtain WiringPi using GIT: git clone If you have already used the clone operation for the first time, then cd wiringPi git pull origin. Raspberry Pi B+ Expansion Board. Waveshare DVK512 Kits For Raspberry Pi Model B+ Include RTC, Sensors, LCD Display, and More.

Beaglebone (Black) expansion boards are called capes, Minnowboard ones are lures, and Raspberry Pi model B+ add-on boards can be HATs (HArdware on Top). 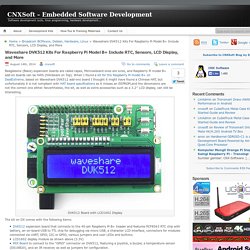 When I found a kit for the Raspberry Pi model B+ on DealExtreme, based on Waveshare DVK512 add-ons board I thought it might have found a Chinese HAT, but unfortunately it is not compliant with HAT board specifications as it misses an EEPROM,and the dimensions are not the correct one either. Nevertheless, the kit, as well as extra accessories such as a 3.2″ LCD display, can still be interesting. DVK512 Board with LCD1602 Display The kit on DX comes with the following items: But other add-on board such as a 3.2″ resistive touch screen, a camera module, motion sensor module, ADC and DAC module, 3D accelerometer and modules, etc.. are also available. 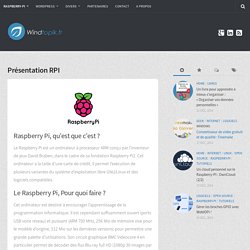 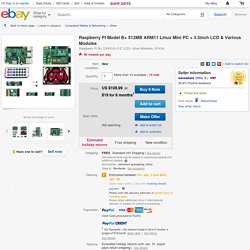 You've been outbid by someone else. You can still win! You've been outbid by someone else's max bid. Your bid wasn't accepted because it's the same as someone else's bid. Try raising your max bid. You're the highest bidder! To increase your chances of winning, try raising your bid. You're the first bidder. You're still the highest bidder! You increased your max bid to Please enter your bid again.

Enter a valid amount for your bid. Raspberry Pi. The Raspberry Pi is a small but powerful Linux based computer that was created to help educate a new generation of programmers and electronics engineers. 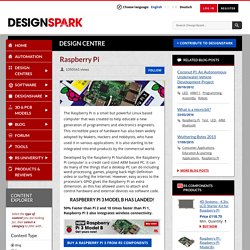 This incredible piece of hardware has also been widely adopted by Makers, Hackers and Hobbyists, who have used it in various applications. It is also starting to be integrated into end-products by the commercial world. Developed by the Raspberry PI foundation, the Raspberry Pi computer is a credit card sized ARM based PC. It can do many of the things that a desktop PC can do including word-processing, games, playing back High-Definition video or surfing the Internet. However, easy access to the processor's GPIO gives the Raspberry Pi an extra dimension, as this has allowed users to attach and control hardware and external devices via software code. Raspberry Pi.