The “Gold Standard,” School Libraries, and ESSA. Today AASL engaged in an experience the likes of which we’ve never seen in the school library profession. 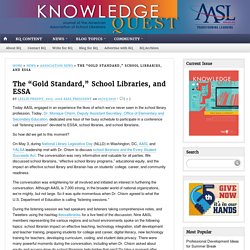 Today, Dr. Monique Chism, Deputy Assistant Secretary, Office of Elementary and Secondary Education, dedicated one hour of her busy schedule to participate in a conference call “listening session” devoted to ESSA, school libraries, and school librarians. So how did we get to this moment? On May 3, during National Library Legislative Day (NLLD) in Washington, DC, AASL and YALSA leadership met with Dr. ESSA learning more, doing more. ESSA and Digital Literacy Skills. By Christina Cucci, SLMS, NJASL Member at Large, ALA Emerging Leader 2015, AECT Member ESSA was signed into law in December 2015. 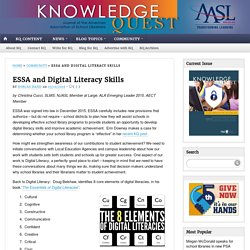 ESSA carefully includes new provisions that authorize – but do not require – school districts to plan how they will assist schools in developing effective school library programs to provide students an opportunity to develop digital literacy skills and improve academic achievement. Erin Downey makes a case for determining whether your school library program is “effective” in her recent KQ post. How might we strengthen awareness of our contributions to student achievement? We need to initiate conversations with Local Education Agencies and campus leadership about how our work with students sets both students and schools up for greater success. Everything You Need to Know About the Every Student Succeeds Act. On December 10, 2015, President Obama signed the Every Student Succeeds Act (ESSA), legislation to rewrite the Elementary and Secondary Education Act and replace the No Child Left Behind Act (NCLB). 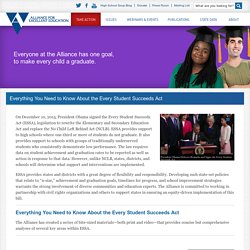 ESSA provides support to high schools where one-third or more of students do not graduate. It also provides support to schools with groups of traditionally underserved students who consistently demonstrate low performance. The law requires data on student achievement and graduation rates to be reported as well as action in response to that data. Universal Design for Learning Makes its Way into ESSA Law. (TNS) — Sprinkled throughout the newly reauthorized version of the Elementary and Secondary Education Act are references to an instructional strategy that supporters think has enormous potential for reaching learners with diverse needs. 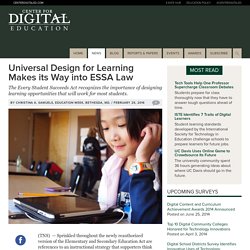 The next thing to do, those proponents say, is getting more educators to understand just what it means. Called universal design for learning, or UDL for short, the strategy encompasses a wide set of teaching techniques, allowing multiple ways for teachers to present information and for students to engage in lessons and demonstrate what they know. A universally designed lesson, for example, might include audiovisual components, illustrations, traditional lectures, enlarged print, or glossaries so that students can have easy access to unfamiliar terms. ESSA - SchoolLibraryAdvocacy.org. School Libraries, Every Student Succeeds Act (ESSA) and Title I – What Should We Ask? Designed to equalize educational opportunities and resources for disadvantaged children, Title I has been in existence since the inception of the Elementary and Secondary Education Act (ESEA) enacted in 1965 to address the “War on Poverty.” 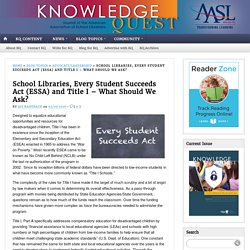 Most recently ESEA came to be known as No Child Left Behind (NCLB) under the last re-authorization of the program in 2002. Since its inception billions of federal dollars have been directed to low-income students in what have become more commonly known as “Title I Schools.” The complexity of the rules for Title I have made it the target of much scrutiny and a lot of angst by law makers when it comes to determining its overall effectiveness. As a pass-through program with monies being distributed by State Education Agencies/State Government, questions remain as to how much of the funds reach the classroom. Over time the funding mechanisms have grown more complex as have the bureaucracies needed to administer the program. At the state level: Elementary and Secondary Education Act. En Español "With this bill, we reaffirm that fundamentally American ideal—that every child, regardless of race, income, background, the zip code where they live, deserves the chance to make of their lives what they will. 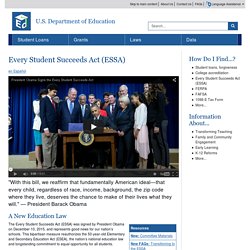 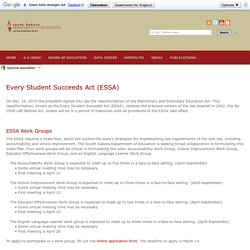 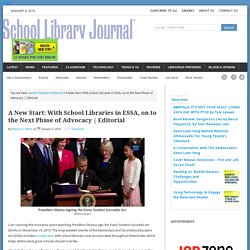 The long-awaited rewrite of the Elementary and Secondary Education Act (ESEA) includes a major win, with school libraries now incorporated throughout federal law, which helps define what great schools should look like. We at SLJ have been reflecting on the long road that has led to this moment. Years of advocacy in the field by so many have paid off. It is worth taking the time to appreciate the success and recall the hard work, ongoing strategic thinking, and coalition-building that made this possible. A Win for All: With ESSA, Libraries Make Solid Gains. Librarians have much to be proud of in the new Every Student Succeeds Act (ESSA). 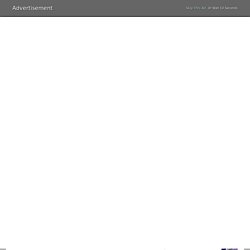 The long-awaited rewrite of the Elementary and Secondary Education Act (ESEA, most recently also known as No Child Left Behind) sailed though both the Senate and House to arrive in front of President Obama, making it one of the few signs of functional bipartisanship in a rough year for getting stuff done on the hill. As the president signed ESSA into law on December 10, he referred to its arrival as “a Christmas miracle.” It certainly felt like a miracle and for librarians perhaps even more so. Years of advocacy had paid off with the integration throughout of language about school libraries and librarians—validating the important contribution they make to student learning and enabling funding to support their development.

While this is a win for school libraries, it is also a win for all libraries. The benefit extends to public libraries as well. All for one. ESSAPrimer Accountability. ESSAPrimer HighSchools. ALA%20 %20ESEA%20Conference%20Overview%20%2811 30 15%29. School Librarians and the Every Student Succeeds Act (ESSA) AASL Position Statements Definition for an Effective School Library Program AASL supports the position that an effective school library program has a certified school librarian at the helm, provides personalized learning environments, and offers equitable access to resources to ensure a well-rounded education for every student. 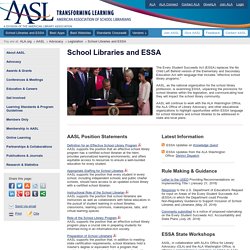