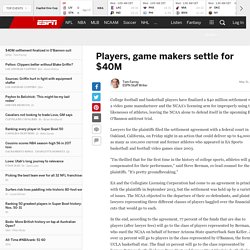 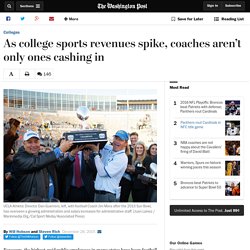 But as big-time college sports revenues have nearly doubled over the past decade, coaches are far from the only ones cashing in. Since 2004, many athletic directors have seen their pay soar and have gone on hiring sprees, surrounding themselves with well-paid executives and small armies of support staffs to help their premier teams — primarily football — recruit, train and plan for games. Rising administrative and support staff pay is one of the biggest reasons otherwise profitable or self-sufficient athletic departments run deficits, according to a Washington Post review of thousands of pages of financial records from athletic departments at 48 schools in the five wealthiest conferences in college sports. 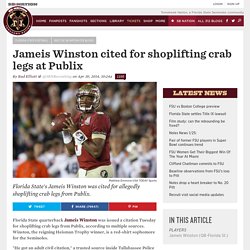 Florida State quarterback Jameis Winston was issued a citation Tuesday for shoplifting crab legs from Publix, according to multiple sources. Winston, the reigning Heisman Trophy winner, is a red-shirt sophomore for the Seminoles. "He got an adult civil citation," a trusted source inside Tallahassee Police told Tomahawk Nation. "If he completes the sanctions it will never show up on his record. Winston tossed the winning touchdown in the National Championship game over Auburn in the closing seconds. Winston has had previous run-ins with the law, but no arrests. The timing of the citation is interesting given that the NCAA recently approved unlimited meals for student athletes. Winston was recently voted the quarterback on the Florida State All-Jimbo Fisher team. 11:35 Update: The Leon County Sheriff's Office will hold a 2 p.m. press conference concerning Jameis Winston. 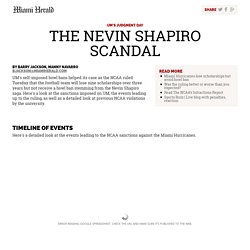 From 1990 to 1994, UM awarded more than $412,000 in excessive aid after improperly calculating off-campus room and board stipends for 141 football players and an undetermined number of baseball, women's golf and men's tennis players.. From the fall of 1989 through the fall of 1993, student-athletes received an average of $110 in impermissible books each semester. Student-athletes were improperly compensated for employment. From 1989 to 1991, an athletics department staff member helped approximately 60 to 77 student-athletes fraudulently receive a total of $212,969 in Pell Grants. Football players were given cash awards for game performance between 1986 and 1992. During the 1993-94 and 1994-95 academic years, UM allowed three football players to compete without being subjected to the required disciplinary measures in the drug testing program.

For football, UM was given three years probation, a postseason ban for 1995 and public reprimand and censure. Five Ohio State Buckeyes, including Terrelle Pryor, must sit out five games in '11. Dec 26, 2010ESPN.com news services print COLUMBUS, Ohio -- Welcome to Tattoo U. 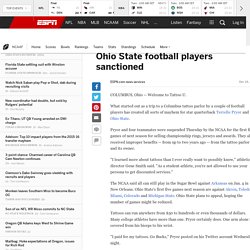 What started out as a trip to a Columbus tattoo parlor by a couple of football players has created all sorts of mayhem for star quarterback Terrelle Pryor and Ohio State. Pryor and four teammates were suspended Thursday by the NCAA for the first five games of next season for selling championship rings, jerseys and awards. They also received improper benefits -- from up to two years ago -- from the tattoo parlor and its owner.

"I learned more about tattoos than I ever really want to possibly know," athletic director Gene Smith said. The NCAA said all can still play in the Sugar Bowl against Arkansas on Jan. 4 in New Orleans. Tattoos can run anywhere from $50 to hundreds or even thousands of dollars. "I paid for my tattoos. Pryor even sold a sportsmanship award from the 2008 Fiesta Bowl, along with his 2008 Big Ten championship ring. Cash and carry - Reggie Bush Investigation. An eight-month Yahoo! 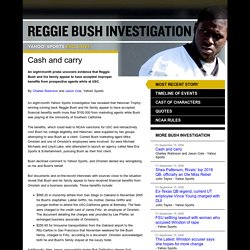 Sports investigation has revealed that Heisman Trophy-winning running back Reggie Bush and his family appear to have accepted financial benefits worth more than $100,000 from marketing agents while Bush was playing at the University of Southern California. The benefits, which could lead to NCAA sanctions for USC and retroactively cost Bush his college eligibility and Heisman, were supplied by two groups attempting to woo Bush as a client. Current Bush marketing agent Mike Ornstein and one of Ornstein's employees were involved. So were Michael Michaels and Lloyd Lake, who attempted to launch an agency called New Era Sports & Entertainment, pursuing Bush as their first client. Bush declined comment to Yahoo! Richard Sherman on the NCAA: ‘You're not on scholarship for school' Teammate Michael Bennett: "[The NCAA] says, 'We gave you a free degree.' That's like me owning a restaurant and saying, 'I'll give you a free burger. 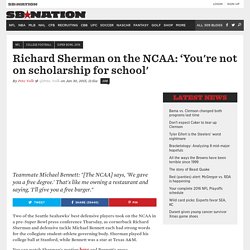 " Two of the Seattle Seahawks' best defensive players took on the NCAA in a pre-Super Bowl press conference Thursday, as cornerback Richard Sherman and defensive tackle Michael Bennett each had strong words for the collegiate student-athlete governing body. Sherman played his college ball at Stanford, while Bennett was a star at Texas A&M.