How To Think Like A Programmer. How to think like a programmer — lessons in problem solving. By Richard Reis If you’re interested in programming, you may well have seen this quote before: “Everyone in this country should learn to program a computer, because it teaches you to think.” — Steve Jobs. 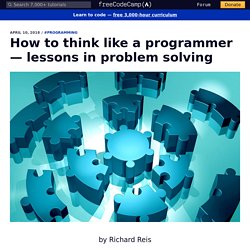 How to Code for Beginners: Best Ways to Learn How to Code. Coding has exploded in recent years, changing from something used in computer games and the occasional electronic device, to something which shapes the way that we live in the modern world. 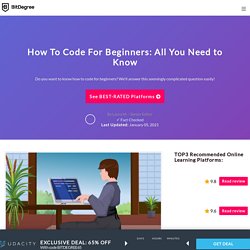 Asterisks in Python: what they are and how to use them - Trey Hunner. There are a lot of places you’ll see * and ** used in Python. 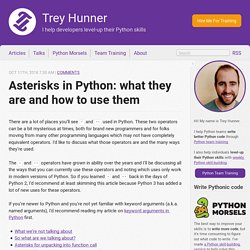 These two operators can be a bit mysterious at times, both for brand new programmers and for folks moving from many other programming languages which may not have completely equivalent operators. I’d like to discuss what those operators are and the many ways they’re used. The * and ** operators have grown in ability over the years and I’ll be discussing all the ways that you can currently use these operators and noting which uses only work in modern versions of Python. So if you learned * and ** back in the days of Python 2, I’d recommend at least skimming this article because Python 3 has added a lot of new uses for these operators. If you’re newer to Python and you’re not yet familiar with keyword arguments (a.k.a. named arguments), I’d recommend reading my article on keyword arguments in Python first. Timing Functions With Decorators - Python. Everything in Python is an object. 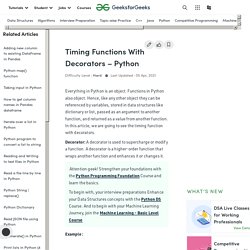 Functions in Python also object. Hence, like any other object they can be referenced by variables, stored in data structures like dictionary or list, passed as an argument to another function, and returned as a value from another function. Python Timer Functions: Three Ways to Monitor Your Code. Look back at how you added the Python timer to the example above. 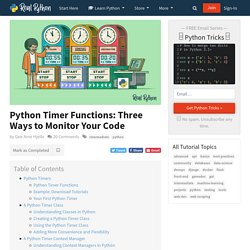 Note that you need at least one variable (tic) to store the state of the Python timer before you download the tutorial. After staring at the code a little, you might also note that the three highlighted lines are added only for timing purposes! Now, you’ll create a class that does the same as your manual calls to perf_counter(), but in a more readable and consistent manner. What is NumPy? — NumPy v1.22.dev0 Manual. NumPy is the fundamental package for scientific computing in Python. 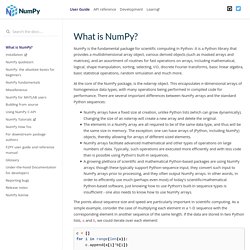 It is a Python library that provides a multidimensional array object, various derived objects (such as masked arrays and matrices), and an assortment of routines for fast operations on arrays, including mathematical, logical, shape manipulation, sorting, selecting, I/O, discrete Fourier transforms, basic linear algebra, basic statistical operations, random simulation and much more. At the core of the NumPy package, is the ndarray object. : Python plotting — Matplotlib 3.4.3 documentation. Matplotlib is a comprehensive library for creating static, animated, and interactive visualizations in Python. 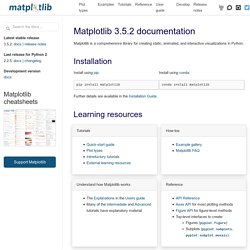 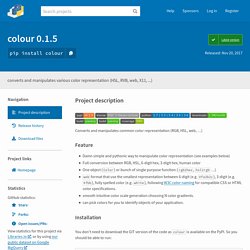 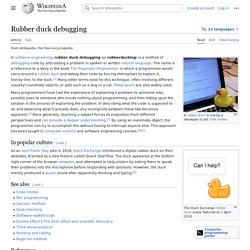 The name is a reference to a story in the book The Pragmatic Programmer in which a programmer would carry around a rubber duck and debug their code by forcing themselves to explain it, line-by-line, to the duck.[1] Many other terms exist for this technique, often involving different (usually) inanimate objects, or pets such as a dog or a cat. Many programmers have had the experience of explaining a problem to someone else, possibly even to someone who knows nothing about programming, and then hitting upon the solution in the process of explaining the problem. In popular culture[edit] Convert JPEG to Base64 - Online JPG Tools. In this example, we enable the base64 chunking and convert a JPG icon of a bird holding a green laurel branch into a multi-line base64 string. 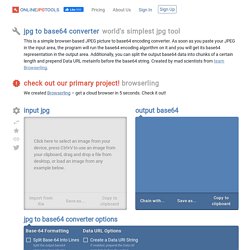 The chunk size is set to 80 characters, which means that each line is exactly 80 characters long. Such chunking length is convenient when you need to edit the base64 data in a text editor as editing multi-line data is easier than editing single-line data. (Source: Pexels.) Project Jupyter. About EFL. EFL, or the Enlightenment Foundation Libraries, powers millions of systems from mobile phones to set-top boxes, desktops, laptops, game systems and more. EFL is recognized for its forward-thinking approach which allows product designers and developers to offer more than the run-of-the-mill user experience of the past. This is where EFL excels. Free.fr has shipped millions of set top boxes in France powered by EFL. The Openmoko Freerunner project also sold thousands of devices using EFL and Enlightenment.

EFL powers Samsung Galaxy Watch smartwatches and is behind Samsung Smart Televisions such as the Class Q9F QLED 4K TV and refrigerators such as the Samsung Family Hub Refrigerator, which are based on Tizen.