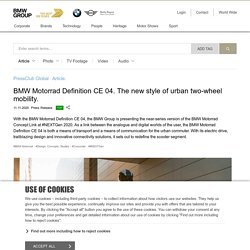 With the BMW Motorrad Definition CE 04, the BMW Group is presenting the near-series version of the BMW Motorrad Concept Link at #NEXTGen 2020. Scooters are badly designed and increase inequality. Here's how to fix. Neptun X hydrofoiling surfboard glides above the surface at 28 mph. Hydrofoiling devices are starting to become more common as electric propulsion systems continue to develop. 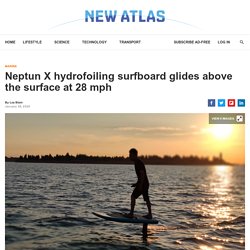 This one's a board you can stand on and accelerate up and out of the water to cruise at a low-drag 28 mph (45 km/h) for up to 80 minutes. The Neptun X, from Chinese company eFoilFly, is a fairly simple device following in the footsteps of other boards like the Lift eFoil. Made from carbon fiber, with fiberglass, EPS foam and resin sections to keep it cool enough to touch when it's been sitting in the sun, it's a 66-inch (1.68 m) long, 43.4-inch (1.1 m) wide board with a removable battery and a detachable, full carbon hydrofoiling wing underneath measuring 31.5 inches (80 cm). Boosted Rev - Electric Scooter. I Rode All the E-Scooters. Most of Them Are Awful Except Two. Untitled. Lightweight eScooter rolls and folds last mile commute.

Tipping the scales at 11 kg (24 lb), the eScooter should be light enough to carry onto trains or up the steps leading to the office. 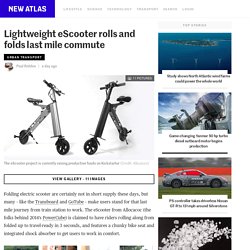 It can also be dragged along the flat tarmac using a combination of a D-shaped grip on the handlebar stem and a trolley wheeled kickstand at the tail end of the rear wheel's splash guard, which also serves to keep the eScooter upright when standing on its own. Allocacoc has included a side kickstand too for park-it-when-unfolded convenience. When folded up, the eScooter is 107 cm (42 in) high and just 34 cm (13 in) wide, which changes to 86 x 105 cm when it's readied for the trundle to the office.

It has small wheels front and back with 8-inch non-inflatable tires, with hidden mechanical brakes at the back and a rear wheel hub motor that should get riders rolling up to 20 km/h (just short of 12.5 mph). An onboard trip computer features buttons to increase/decrease speed, as well as displaying speed and remaining battery life. The next evolution in urban mobility. by SnikkyBike. We bring to life an innovative concept providing increased flexibility and incredible manoeuvrability for individual mobility in urban areas. 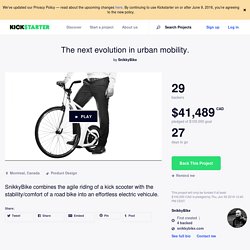 The SnikkyBike combines the agile riding properties of a kick scooter with the stability and comfort of a road bike into an effortless all electric vehicle. We believe that technology should bring people together, so no matter how you feel, get up, dress up and show up. With a SnikkyBike. SnikkyBike’s design philosophy is centered on simplicity. Hope bike : Shiny Hammer. SERPENT Series: Smallest And Coolest Electric Skateboards by Kuickwheel.

BMW to sell new $2850 X2City electric kick scooter through bike shops. BMW's new X2City folding electric kick scooter is a potentially landmark product for the brand in many ways, not the least of which is that it is the first BMW product that will be sold and serviced outside the global BMW dealership network. 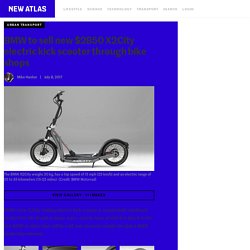 The new 15 mph (25 km/h) X2City has an electric range of 25 to 35 kilometers (15-22 miles), and folds to a size that BMW claims is smaller than a folding bicycle. Viewed in comparison to the wider offerings of the marketplace, none of those qualities are game changers, but it does offer the BMW experience to new audiences for the first time in more than 70 years. BMW has been making bicycles since 1945, cars since 1929 and motorcycles since 1923. Though no price has been established as yet, BMW has flagged the X2City will sell for less than €2,500 (US$2850) when it goes on sale in time for Christmas (2017). Mercane, 머케인. JayKay hides electric motor and batteries inside longboard trucks.

Electric skateboard has no use for four wheels. While they're certainly not common, we have seen two-wheeled skateboards before. 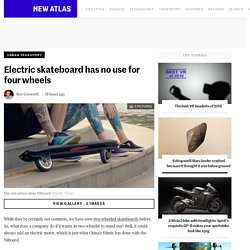 So, what does a company do if it wants its two-wheeler to stand out? Well, it could always add an electric motor, which is just what China's Yiimix has done with the Yiiboard. First of all, you may wonder what the point behind a two-wheeled skateboard is – besides just looking weird, and requiring a steeper learning curve in order to ride it. Well, the big selling point is that it has a tighter turning radius than a regular four-wheeler, allowing riders to really carve into turns. Eon by UNLIMITED - Plug & Play Electric Skateboard by Unlimited.

10 Best Electric Skateboards - 2015 Reviews & Ratings. The 10 electric skateboards featured above are among the best you can buy online. 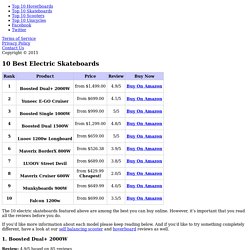 However, it’s important that you read all the reviews before you do. If you’d like more information about each model please keep reading below. Exorider // Black - Exorider. Exorider New York. Funky INU electric scooter auto-folds in under 5 seconds. Away from the bright lights and cherry reds of the main Frankfurt Motor Show attractions, in a secondary hall filled with startup companies and electric bicycles, a smaller vehicle design caught our eye as quickly and fully as the all-new shape-shifting Mercedes-Benz Concept IAA. 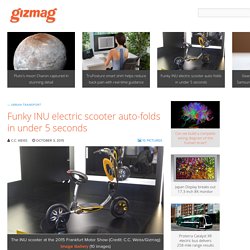 It's the INU folding scooter, and it looks a little like some type of wheeled insect. Step inside those wings and you'll find a sleek electric commuter with a smartphone-controlled folding system and other high-tech features. Israeli startup Green Ride revealed the INU scooter at this year's Consumer Electronics Show and are working to get it to market next year. Its name means dog in Japanese, and it's designed to be a loyal best friend in the city, getting you off your feet and rolling you to any destination within 25 miles (40 km). Cocoa motors.Inc｜WalkCar(ウォーカー)｜持ち運べるクルマ. Custom Motorcycles, Surfboards, Clothing and AccessoriesDeus Ex Machina. Boosted Boards skateboard claimed to be world's lightest electric vehicle. San Francisco-based startup Boosted Boards has produced an eponymous electric skateboard prototype capable of providing a push-free ride for up to 6 miles. 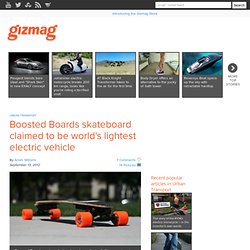 While an electric skateboard isn't anything new in itself, this particular longboard is declared by its makers to be the world's lightest electric vehicle. View all Boosted Boards markets the longboard as a “last mile” mode of transport; that is, a vehicle intended to complement existing public transportation infrastructure for the final leg of the journey home. The board consists of components which will be familiar to skaters and which sound suitably impressive to the rest of us: Loaded Vanguard, Bear Grizzly 852s, Otang 80A In Heats, and Jehu bearings. Weight is kept down to a transportable 12 – 15 lb (5.5 – 6.8 kg). The Monolith: World's First Skateboard with In-wheel Motors by Inboard Sports. Kickstarter Collections Projects We Love Saved Trending Nearly Funded Just Launched Everything Categories On Our Radar. 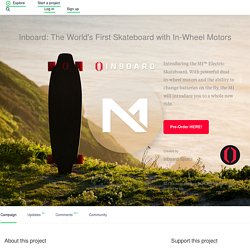 Introducing the world's first and only Smartscooter™ ZBoard reveals new, improved electric skateboard. When it was announced, the ZBoard was claimed to be the first weight-sensing electric skateboard. Riders lean forward on it to accelerate and back to brake. Now, a new version of the board has been announced. The ZBoard 2 is said to be lighter, faster, more powerful and have a longer range. View all As with the original ZBoard, of which there were Classic and Pro versions, there are two versions of the ZBoard 2. Both are powered by a new 500 W brushless motor and have a top speed of 20 mph (32 km/h). Much of the weight reduction and increased range is down to using smaller lithium batteries. The range is also improved due to the ZBoard 2's use of regenerative braking. Among the other safety features of the ZBoard 2 are the built in LED head and tail lights. The Walking Bicycle strolls along at 15 mph. The Walking Bicycle, which combines walking and cycling into one activity, is available in a range of colors Image Gallery (7 images) If you enjoy the simple pleasure of walking but wish it got you from A to B as quickly as cycling then the Walking Bicycle may be your dream machine.

Trikelet. Trikelet claims title of world's smallest foldable electric vehicle. Over the past few years we’ve seen no shortage of new electric scooter designs, and prominent among them are those that fold-up to become the ideal urban commuting weapon. Dutch-based Trikelet BV is looking to add to this list with a 3-wheeler billed as the "most compact, foldable electric vehicle in the world.

" According to the designers, current prototypes of the Trikelet use a 500-700 W motor to achieve a range of roughly 15 km (9.3 mi), a top speed of 20 km/h (12 mph) and reportedly consume 1 kWh of electricity per 70 km (43.5 mi) under full load. The scooter weighs in at around 26 lb (12 kg) and when unfolded it sports a very small footprint of 31 x11 in (800 x 290 mm), but real party trick is the clever folding mechanism. Kickstart releases its Zümaround electric-assist stand-up scooter.

Kickstart Scooters has unveiled a new electric kick scooter that it calls the Zümaround. The scooter is designed to give riders a full electric boost when muscling up difficult terrain. Its large pneumatic tires will roll you to speeds of up to 20 mph (32 km/h) View all Similar to the BMW i Pedelec and Voltitude scooters, only in stand-up form, the Zümaround is a kick scooter with e-assist function that's designed to get you up hills and through wind and weather. Video review: Evolve electric skateboard.

While skateboarding is most popular with teenage males, improvements in compact electric motors and batteries has seen the emergence of electric skateboards that appeal to a much wider demographic, including those of us that are literally a wider demographic than we were in our teenage years. Tesla Model S review: The “road-trip problem” is no problem at all. Photo by Bill Pugliano/Getty Images. Yuneec brings its e-power to the streets, with an electric longboard.