Symbolism in Australian Indigenous Art. There is no written language for Australian Aboriginal People so in order to convey their important cultural stories through the generations it is portrayed by symbols/icons through their artwork. 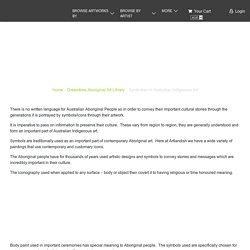 It is imperative to pass on information to preserve their culture. These vary from region to region, they are generally understood and form an important part of Australian Indigenous art. Symbols are traditionally used as an important part of contemporary Aboriginal art. Here at Artlandish we have a wide variety of paintings that use contemporary and customary icons. Aboriginal Culture. Profile of Indigenous Australians. Australia's welfare 2017: in brief, Indigenous Australians. There were an estimated 761,300 Aboriginal and Torres Strait Islander people in Australia as at 30 June 2017, or 3% of the total population. 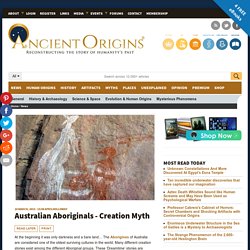 Many different creation stories exist among the different Aboriginal groups. These ‘Dreamtime’ stories are considered to be a place where every person exists forever. According to the Aboriginals, the ‘Dreaming’ era preceded our own and was when spirit beings formed creation. It is believed that a culture of heroes (gods) travelled across a land without form and created sacred sites and other significant places, giving the language to people. One of the legends describes only bare land existing in the beginning. The god Baiame later arrives from the skies with his wife Birrahgnooloo (Emu, goddess of fertility). Aboriginal language basics.

Language and culture Language is a fundamental part of Aboriginal culture and identity, even for those who do not speak an Aboriginal language. 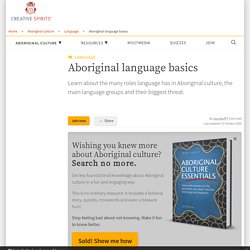 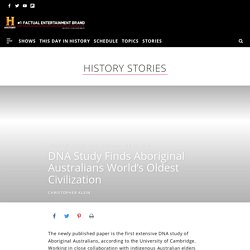 Working in close collaboration with indigenous Australian elders and leaders, an international team of researchers obtained permission to extract DNA from the saliva of 83 Aboriginal Australians and 25 Papuans from New Guinea and sequence their complete genetic information. While some scholars have theorized that indigenous Australians descended from a separate, earlier migration than that of Eurasian people, the study’s authors report that the majority of non-Africans stem from a single ancestral group of migrants who left Africa approximately 72,000 years ago and eventually spread across the other continents.

Around 50,000 years ago, the wave of migration reached Sahul, a prehistoric supercontinent composed of present-day Australia, Tasmania and New Guinea prior to their separation by rising sea levels 10,000 years ago. Introduction to Aboriginal Art - Aboriginal Australian Art & Culture. Translation of Dreaming Dreaming is an approximate English translation of an Aboriginal concept, which has no equivalent in the English language. 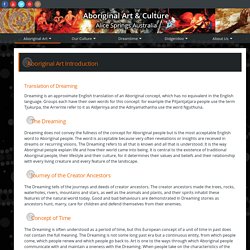 Groups each have their own words for this concept: for example the Pitjantjatjara people use the term Tjukurpa, the Arrernte refer to it as Aldjerinya and the Adnyamathanha use the word Nguthuna. The Amazing Story of Aboriginal Art. The same year in July of one of Clifford Possum Tjapaltjarri’s acclaimed work ‘Warlugulong “map series” reached $2.4 million. 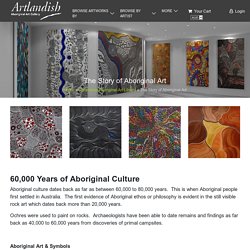 Aboriginal Art is equally at home in both galleries and museums. The Australian Aboriginal is arguably the most successful and certainly the longest surviving culture in human history. It is complex and focused on long term survival in the most hostile of environments. It has deep knowledge, spiritual, cultural and practical survival teachings. Living languages. 'Keriba gesep agiakar dikwarda keriba mir. 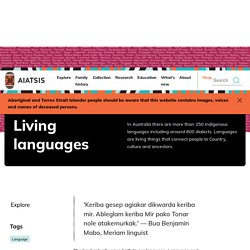 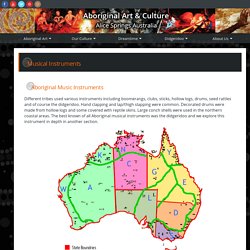 Hand clapping and lap/thigh slapping were common. Decorated drums were made from hollow logs and some covered with reptile skins. Large conch shells were used in the northern coastal areas. Rainbow Serpent Dreamtime Story - Japingka Aboriginal Art Gallery. By: David Wroth, Japingka Gallery, Last updated Feb 2020 The Rainbow Serpent (Serpant) dreaming in Aboriginal society represents one of the great and powerful forces of nature and spirit. 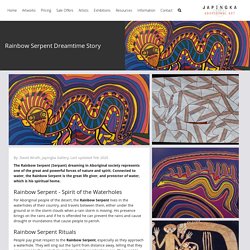 Connected to water, the Rainbow Serpent is the great life giver, and protector of water, which is his spiritual home. Indigenous Australians: Australia’s First Peoples exhibition 1996-2015 - The Australian Museum. Pemulwuy - New South Wales Pemulwuy was the first of the Aboriginal resistance fighters. 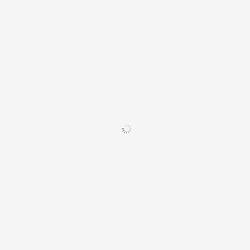 Between 1790 and 1802, Pemulwuy waged a guerrilla war on the young colony of New South Wales. This was in response to the invasion of his country, the killing of his people and the restriction of his peoples' food sources caused by the British. Pemulwuy planned and carried out several 'lightning' or guerilla attacks against the European settlements in the Parramatta and Toongabbie areas. Pemulwuy was a strong, charismatic leader with a fierce determination to rid his land of the European settlers.

How Australia’s Aboriginal People Are Fighting for Justice. Death has a sound in Yuendumu, a red-dirt town in the middle of Australia’s sparsely populated Northern Territory. The haunting ritual wailing, to mark the death of a loved one, permeates Samara Fernandez-Brown’s memories of the town her family is from. The 22-year-old lives in the southern city of Adelaide, but she traveled 1,100 miles to the town of 800 residents—nearly all of whom are Aboriginal people called the Warlpiri—on Nov. 9, 2019 to attend her grandfather’s funeral. When she heard crying on the evening of the memorial, she assumed it was to mourn him.

She soon learned the sobs were for someone else: her 19-year-old cousin Kumanjayi Walker. Just hours earlier, four officers from a special police unit and a dog handler from Alice Springs, the closest major town at some 200 miles away, had arrived in Yuendumu. Body cam footage shows the officers grappling with Walker. Word of the botched arrest moved quickly through Yuendumu, which covers less than three square miles. Sia Duff. Aboriginal Australia: History, Culture, and Conflict. Who Are Aborigines? Aborigines are Australia's indigenous people. Recent government statistics counted approximately 400,000 aboriginal people, or about 2% of Australia's total population. Australian Aborigines migrated from somewhere in Asia at least 30,000 years ago. Though they comprise 500–600 distinct groups, aboriginal people possess some unifying links.

Australian aborigine. Location, Land, and Climate Australia, the aboriginal homeland, is earth's direst and flattest continent. Only the eastern seaboard and the northern tropical forests get consistent rainfall. The state of Australia's Indigenous languages – and how we can help people speak them more often. In 1788 there were between 300 and 700 Indigenous languages spoken across Australia by millions of people, as shown in anthropologist Norman Tindale’s 1974 map. However in the Australian 2016 Census, only around 160 of these languages were reported as being spoken at home. And of these, only 13 traditional Indigenous languages are still spoken by children.