Organizing in a collaborative fashion 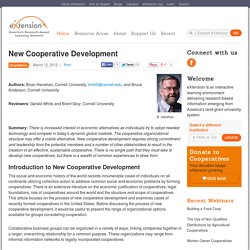 Henehan. Authors: Brian Henehan, Cornell University, bmh5@cornell.edu, and Bruce Anderson, Cornell University. Home » The Cooperative Foundation. About DAW – What is DAW? Democracy at Work is a project, begun in 2010, that aims to build a social movement. 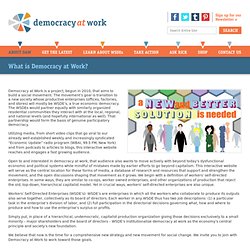 The movement’s goal is transition to a new society whose productive enterprises (offices, factories, and stores) will mostly be WSDE’s, a true economic democracy. The WSDEs would partner equally with similarly organized residential communities they interact with at the local, regional, and national levels (and hopefully international as well). That partnership would form the basis of genuine participatory democracy. Democracy at Work Institute. 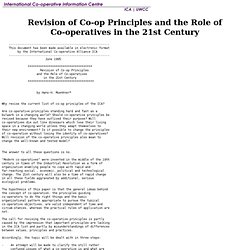 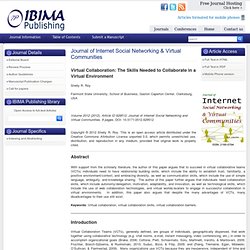 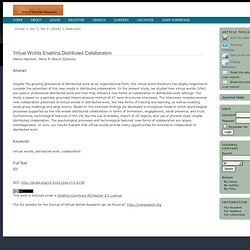 Isolation: The New Innovator’s Dilemma. It’s can be a long, lonely climb Innovators transform the world around them in big and small ways and while a successful effort can be lauded by pundits, politicians and the public there is a long road to making change happen. 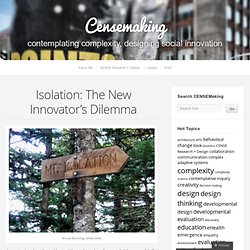 That road is also a lonely one and doing things different means more than just innovating and experiencing what it means to be resilient firsthand. Clayton Christensen’s seminal book The Innovator’s Dilemma has been one of the leading sources of thinking-inspriation in business and social innovation. The book reflects the challenges with those seeking to introduce new ideas, products or services into established markets (or ecosystems) in the aim of addressing both people’s present and future needs. What does Creative Commons means? (Infographic) [german version] Many People know that there is something called "creative commons licenses". 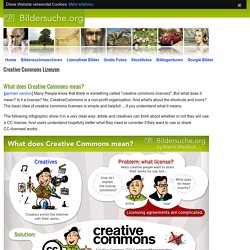 But what does it mean? Is it a license? No, CreativeCommons is a non-profit organization. And what's about the shortcuts and icons? The basic idea of ​​creative commons licenses is simple and helpfull ... if you understand what it means. The following infographic show it in a very clear way: artists and creatives can think about whether or not they will use a CC license. Infographic: "Creative Commons - What does it mean? " Small version Links / Sources. Communities of Practice – What I’ve Learnt. I was recently asked by a colleague to share some “words of wisdom” about what I’d learnt from 9 years of consultancy projects that involved setting up Communities of Practice. 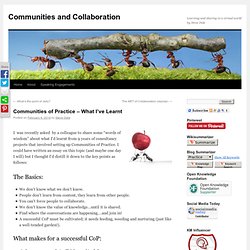 11 Co-ops You Didn’t Know Were Co-ops. Pubs/TechCoopHOWTO.pdf. The Argument For Worker-Owned Tech Collectives ⚙ Co. For all the tales of gilded startup parties and billion-dollar valuations, tech workers are often the most overworked, misunderstood and undervalued employees. 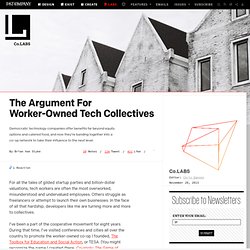 Others struggle as freelancers or attempt to launch their own businesses. Michel Bauwens: Four Scenarios for the Collaborative Economy. Science Translational Medicine. Authors Abstract The complex pathology of consortium fatigue provides diagnostic data on how to improve collaboration in biomedical innovation. 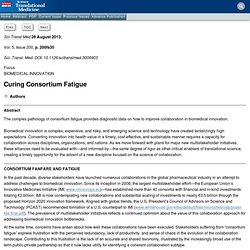 Biomedical innovation is complex, expensive, and risky, and emerging science and technology have created tantalizingly high expectations. Converting innovation into health value in a timely, cost-effective, and sustainable manner requires a capacity for collaboration across disciplines, organizations, and nations.

As we move forward with plans for major new multistakeholder initiatives, these alliances need to be evaluated with—and informed by—the same degree of rigor as other critical enablers of translational science, creating a timely opportunity for the advent of a new discipline focused on the science of collaboration. In the past decade, diverse stakeholders have launched numerous collaborations in the global pharmaceutical industry in an attempt to address challenges to biomedical innovation.

Table 1 Table 2Mobilizing multiple stakeholders. Inside The 'Bossless' Office, Where The Team Takes Charge : All Tech Considered. Hide caption The headquarters of Menlo Innovations, a software design firm in Ann Arbor, Mich. At Menlo, there are no cubicles, few walls and no offices. Elise Hu/NPR Hide caption Menlo Innovations is staffed by about 50 employees, a mix of full-time staff and contractors. Elise Hu/NPR Hide caption Rich Sheridan (standing at right) is Menlo's co-founder and CEO.

Sheridan is the only "boss" at the company. How Worker-Owned Companies Work. Economist Richard Wolff is a proponent of democracy at work: an alternative capitalism that thrives on workers directing their own workplaces. In the documentary film Shift Change, producers Mark Dworkin and Melissa Young tell the stories of successful cooperative businesses from Spain to San Francisco. The Science Behind Why Small Teams Work More Productively: Jeff Bezos' 2 Pizza Rule. 3K Flares Filament.io 3K Flares × Bigger doesn’t mean better when it comes to work. Freelancers Union Tackles Conc. Www.valvesoftware.com/company/Valve_Handbook_LowRes.pdf.

20 Tips for Creating a Professional Learning Network - Getting Smart by Miriam Clifford. “20 Tips for Creating a Professional Learning Network” by Miriam Clifford first appeared on the InfomED blog. Networking is a prime form of 21st century learning. The world is much smaller thanks to technology. Learning is transforming into a globally collaborative enterprise. Take for example scientists; professional networks allow the scientific community to share discoveries much faster. Just this month, a tech news article showcased how Harvard scientists are considering that “sharing discoveries is more efficient and honorable than patenting them.” 5 Things About Aggregation of Tribes. People are gathering in “tribes” to connect, collaborate, discover and influence change.

Social technology provides people the ability aggregate around anything, everything and anywhere. The markets sees this and attempts to aggregate people into self serving tribes but people have a different purpose and their own tribe. The aggregation of tribes has become the pursuit of the market. Pulling people into fan pages, groups and custom networks has become a common practice of the marketplace.

Www.cdsus.coop/sites/default/files/co-op_101.pdf. Worried about your future? Why Joining a Co Working Site is a Good Idea. Look at the growth of Co Working sites. Coworking trend connects solo professionals in communal spaces. How In-Person Meetups Are Fixing The Problem With MOOCs. The Extension Educator's Role as 21st Century Platform Builders - Oct 3, 2012.

Though ostensibly about Cooperative Extension educators, there's much in this session to consider & appreciate for those of us who recognize the deep value that can be found in open, dynamic, collaborative spaces and are involved in creating & enabling them, whether these spaces take the form of forums, web conferences, MOOCs, guilds, virtual co-working spaces, etc... * eXtension 2012 National Conference - The Extension Educator's Role as 21st Century Platform Builders: ; A great complementary piece to this session is this TED talk by Steven Johnson: * TED - Steven Johnson: Where good ideas come from: Thanks to +Anne Adrian and +Jim Langcuster for presenting such a fundamentally relevant topic and for offering a great opportunity for such rich discussion! – jerrybuchko