Wales. Wales is one of the countries in Britain and the United Kingdom. It’s a small country with England to the east. Wales has got a continuous coastline, around 1,300km long, which means there are a lot of beaches! Northern Ireland. Scotland. Scotland is a country in Great Britain, to the north of England. 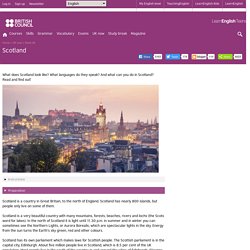 Scotland has nearly 800 islands, but people only live on some of them. Scotland is a very beautiful country with many mountains, forests, beaches, rivers and lochs (the Scots word for lakes). In the north of Scotland it is light until 11.30 p.m. in summer and in winter you can sometimes see the Northern Lights, or Aurora Borealis, which are spectacular lights in the sky. Energy from the sun turns the Earth’s sky green, red and other colours. Scotland has its own parliament which makes laws for Scottish people. Language. British English vs American English. Sport at school. Sports in secondary schools All pupils in the UK have to do PE, or Physical Education, at school until they are 16. 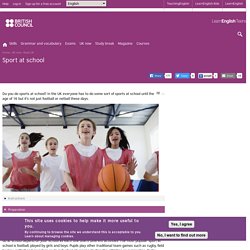 The sports you can do at school depend on your school as each one offers different activities. The most popular sport at school is football, played by girls and boys. Pupils play other traditional team games such as rugby, field hockey, netball and rounders or do individual physical activities like athletics or gymnastics. Today, some schools offer more modern sports and physical activities such as dance, fitness, dodgeball or Ultimate Frisbee.

Traditional and new school sports Here are some traditional and new team sports played at school that you might not know. Netball This competitive sport is played between two teams. Rounders This team sport is similar to baseball or softball. Anaconda Society: The United Kingdom - UR Skola. This is Britain - School. The City of London. This is the River Thames. 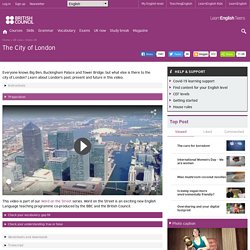 It is almost 346 kilometres long, and is the second longest river in Great Britain. It flows through London, and it’s this part of the river that most tourists see. But there’s more to the Thames than a trip down the river. The Romans built a settlement on the River Thames, and over the centuries it grew into the City of London, with a huge port. Ships from around the world brought food, goods and people to the capital. But by the 1980s, most of the docks had closed and the area became run-down. A lot of money has been invested in this huge riverside area. The old warehouses are now attractive apartments. People also enjoy living on the water! Nick: Hi, Alistair. Alistair: Hey, Nick, welcome aboard. Nick: Thank you. Alistair: I love being close to the water. Nick: What’s it like to live on a boat? Four Nations. Nick: This is London and behind me are the Houses of Parliament. 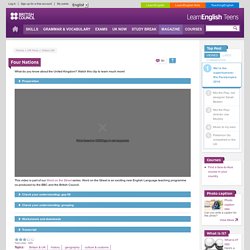 Parts of these buildings are more than nine hundred years old. School discipline. Is discipline a problem in your school? 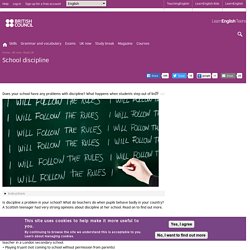 What do teachers do when pupils behave badly in your country? A Scottish teenager had very strong opinions about discipline at her school. Read on to find out more. What is bad behaviour? UK schools are allowed to discipline pupils who behave badly in various ways. Punishments in UK schools Here are some of the ways that UK school children can be punished. • Exclusion: a pupil is excluded from the school and cannot come back. Case Study Freya MacDonald, a 15-year-old pupil from Scotland, made the news in the UK when she refused to accept her school’s punishment.

According to Scottish law every child has the right to an education. Hundreds of schools in Scotland were told not to use detention as a punishment because of Freya’s legal action. Contracts. School dinners. Tour of London. Tour guide: Good afternoon, ladies and gentlemen and welcome to this fantastic tour of London by bus. 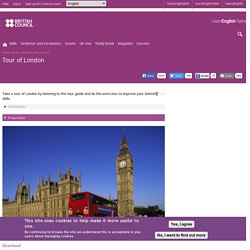 My name’s Greg and I’m your guide this afternoon on our tour of London. As you can see, we’re on an open-top bus, so you can see all the attractions from your seat and you don’t need to walk anywhere. And please don’t worry about the rain, I’m sure it’ll stop soon. A-a-and please ask any questions at any time.Tourist 1: I have a question.Tour guide: Yes? Tourist 1: Do you have extra umbrellas? England. England is the biggest of the four countries in the United Kingdom. 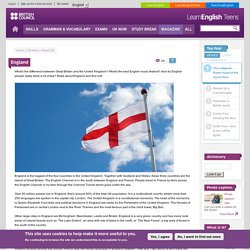 Together with Scotland and Wales, these three countries are the island of Great Britain. The English Channel is in the south between England and France. People travel to France by ferry across the English Channel or by train through the Channel Tunnel which goes under the sea. Over 50 million people live in England, that’s around 80% of the total UK population. It is a multicultural country where more than 250 languages are spoken in the capital city, London. Other large cities in England are Birmingham, Manchester, Leeds and Bristol. Language The official language of England is English, which is spoken today by millions of people all over the world.