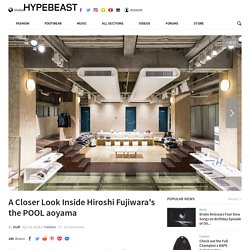 Recently opened at the beginning of April, the appropriately-named concept store is housed inside the first floor of a refurbished building from the ’70s and retains the feel of the swimming pool area formerly used by its residents. The concept store will host three different categories including mainstays with the Pool Essentials, limited exclusives with the POOL Essentials — The “Moment,” and a series of seasonal items connected to the shops art space in “The Temporary at the POOL.” To check out more on offer from the POOL aoyama, check out the store website here. Top Five Moscow-based Concept Stores. With Gosha Rubchinskiy spearheading the movement and a host of exciting young brand’s rising from the former capital of the Soviet Union, Moscow’s streetwear and fashion scene is most certainly on the rise. 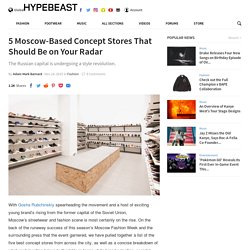 On the back of the runaway success of this season’s Moscow Fashion Week and the surrounding press that the event garnered, we have pulled together a list of the five best concept stores from across the city, as well as a concise breakdown of what each location brings to the table in terms of its brand selection, societal contribution and location. BELIEF Established in late 2011, BELIEF Moscow set out to be one of the first Russian outlets to introduce never-before-seen outboard brands from across the world. Having hit the ground running, the store’s heritage, almost rockabilly aesthetic features artworks by Kostas Seremetis, KAWS and more recently American graffiti artist Futura following a recent collaboration. 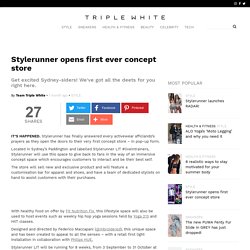 We've got all the deets for you right here. IT’S HAPPENED. Stylerunner has finally answered every activewear afficiando’s prayers as they open the doors to their very first concept store – in pop-up form. Located in Sydney’s Paddington and labelled Stylerunner LIT #liveintrainers, Stylerunner will use this space to give back to fans in the way of an immersive concept space which encourages customers to interact and be their best self. The store will sell new and exclusive product and will feature a customisation bar for apparel and shoes, and have a team of dedicated stylists on hand to assist customers with their purchases. With healthy food on offer by Fit Nutrition Fix, this lifestyle space will also be used to host events such as weekly hip hop yoga sessions held by Yoga 213 and HIIT classes. 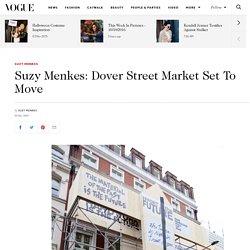 The new site for DSM will be the original Burberry building from 1911, by architect Walter Cave. It was built as the proud flagship of the military brand, but Burberry left in 2007. Darren Gerrish Although Adrian Joffe, the partner in life and in business of Comme des Garçons, reached in Paris, declined to comment, information we found on-line says that the building is part of Lord Alan Sugar's property portfolio. 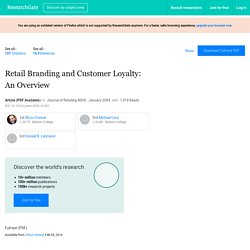 Still others don’t want a personal relationship because they believe it is an in- vasion of their privacy. Kumar and Shah (2004) in their invited commentary. The retail transformation. New technologies and new ways to connect with consumers are transforming the retail sector. 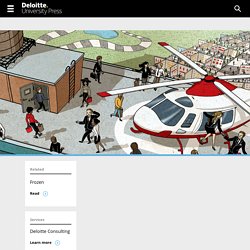 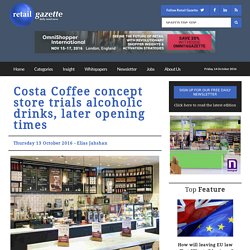 Located on Old York Rd in Wandsworth, south west London, the new concept store offers a selection of alcoholic drinks in the evenings to complement its food and drink range. Alongside an enhanced food and coffee menu, later opening hours will be also trialled, closing at 9pm Monday to Saturday and 7pm on Sundays. The alcoholic drinks are available from 4pm. “As core coffee options become well established favourites, we believe coffee lovers are ready for the next generation of beverages,” Costa UK managing director Jason Cotta said. “Alongside our Mocha Italia espresso-based drinks, we are proud to launch new beans, brews and coffee experiences to our customers.” DARKROOM POPS UP ON THE REGENTS CANAL – darkroomlondon. 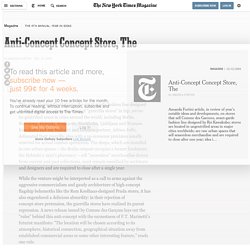 Kawakubo and her husband and business partner, Adrian Joffe, delineated their guerrilla idea with a no-nonsense precision usually reserved for actual combat operations. The shops, which are installed in raw urban spaces -- the Berlin outpost occupies a former bookstore; the Helsinki a 1950's pharmacy -- sell "seasonless" merchandise drawn from current and past collections, must remain unsullied by architects and designers and are required to close after a single year. The idea may be easy to send up, but guerrilla retailing is also smart business, allowing companies to tap into new markets at low cost (rents are cheap; advertising is nil) and to reduce inventory by recycling old merchandise. 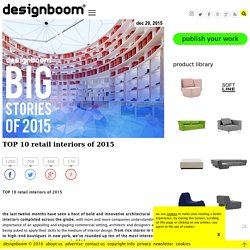 Look Inside Lululemon's Ultra-Sleek 'Concept' Store. Lululemon Athletica’s core focus for nearly 20 years can be summed up neatly: it sold apparel meant to function in the world of sweat. 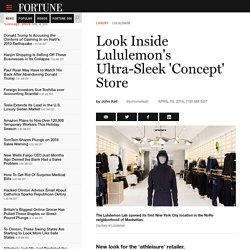 Geared for yoga, studio classes and running, the brand’s most popular tights and tops were meant to make you look fashionable during a workout. The apparel retailer’s aesthetic helped propel a broader movement called “athleisure” – outfits meant for the gym but could be worn to work, brunch and just about any other occasion. Lululemon is partly to praise (or blame depending on your point of view) for why athletic gear has become so ubiquitous. It also explains the pressure people feel to look perfectly coordinated at the gym.

Uospaces. Dalziel & Pow - We’re a leading, independent agency based in London, creating engaging brands all around the world. A Conversation With The Woman Who Established World's First Concept Store. Opening Ceremony, Colette, Dover DOV -1.97% Street Market, and the list goes on. The idea of the concept store is by no means unheard of nowadays, but it all started in Milan twenty-five years ago. In 1990, after a career at the Italian editions of Elle and Vogue, a then 43-year old Carla Sozzani, made a move that was unheard of priorly. “I’ve always been passionate about photography, which developed itself throughout my years as a magazine editor. I would collect photography I bought in New York and London. 10 Corso Como started out as a photo gallery. London Store. Tom Dixon's Howard Street store in SoHo includes a furry room.

British designer Tom Dixon has opened a new store in the SoHo neighbourhood of Manhattan, which features a room with faux-fur walls and a space that resembles a "torture chamber" (+ slideshow). The store is split over three floors of a former boot-making factory on Howard Street, close to where Dixon's first temporary New York retail space was located last year. It forms part of a wider expansion into the US market, coinciding with the launch of another shop in Los Angeles last week. "It's a place that aims to bridge the gap between the professional market and the consumer market," Dixon told journalists during a tour of the building.

"It's really important for us to finally have a direct relationship to American customers. " David chipperfield creates new concept store for brioni. Aug 07, 2016 david chipperfield creates new concept clothing store for brioni in paris david chipperfield architects milan has collaborated with luxury clothing brand brioni to develop a new conceptual language for their flagship store in paris. the 590 square meter space — located at 370 rue saint-honoré — marks an important step in the development of the retailers network expansion. the interior aims to combine and convey different ideas including craftsmanship, tradition, and a progressive vision for the future. the interior for brioni aims to relay the themes of craftsmanship, industrialization, and tradition structural elements made of grey travertine were chosen for the store.

Rachel Shechtman, CEO Of STORY: Redefining The Retail Business Model And The Customer Experience. Evolution of the concept store - Style - How To Spend It. Forbes Welcome. Concept stores: what do they mean for customer experience? 15 Coolest Concept Stores From Around the World. Rethinking retail: why brands are embracing the rise of the concept store. 7 Lessons For Retail in the Age of E-Commerce. Peak Performance's Outdoor Pop-Up Shops Are Only Open at Sunrise and Sunset. What is a concept store? - Insider Trends. Dover Street Market : doverstreetmarket.com. Rodebjer's New Flagship Store in Stockholm. Birmingham - Designer Fashion, Beauty, Food & Wine - Harvey Nichols - Store Details. T Fondaco dei Tedeschi in Venice – DFS Group opens first European store - LVMH. Shoppers were seduced by a naked landscape at Modefabriek. Nude vs Naked exhibition by Floor Knaapen and Grietje Schepers at Modefabriek, Amsterdam – Netherlands.