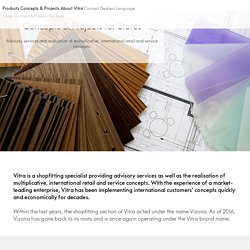 Vitra is a shopfitting specialist providing advisory services as well as the realisation of multiplicative, international retail and service concepts. With the experience of a market-leading enterprise, Vitra has been implementing international customers’ concepts quickly and economically for decades.Within the last years, the shopfitting section of Vitra acted under the name Vizona. As of 2016, Vizona has gone back to its roots and is once again operating under the Vitra brand name. Shopfitting Services We offer retail and service companies customised solutions and project services for every phase of their interior design projects. Our References Fashion, Department Stores, Automotive, Telecommunication, Consumer Electronics, Banking & Financial Services, Health & Beauty, Home Stores, Opticians and Others.

References Sustainability News for stores. Best shopping in Tokyo. Eclectic good for eccentric tastes at Ooedo Kazuko In a city known for its weird, wonderful and enormous retail centres, whole afternoons can be lost wondering around Tokyo shopping complexes. 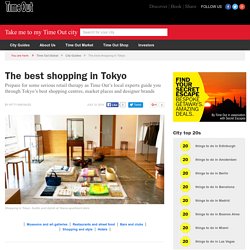 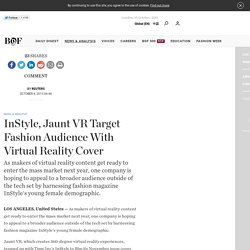 Swatch Links With China Bank Giants for Payment Watch. ZURICH, Switzerland — Swatch Group AG is linking up with China Unionpay Co., a payments giant, and Bank of Communications Co., one of China’s big-five banks, to sell a watch that can be used to make payments. 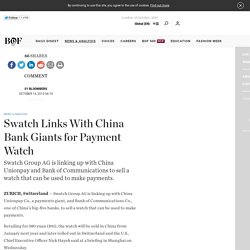 Retailing for 580 yuan ($91), the watch will be sold in China from January next year and later rolled out in Switzerland and the U.S., Chief Executive Officer Nick Hayek said at a briefing in Shanghai on Wednesday. The watch will be sold at Bocom and Swatch outlets and can be used for payments at Unionpay point-of-sale machines across the nation, according to a statement from Swatch. 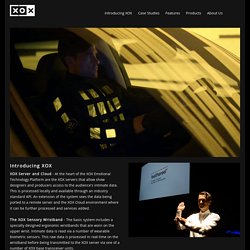 A Conversation With the Psychologist Behind 'Inside Out' Pixar has a proud tradition of taking things that are incapable of expressing human emotion—robots, toys, rats, cars—and imagining a world where they can, in fact, feel. 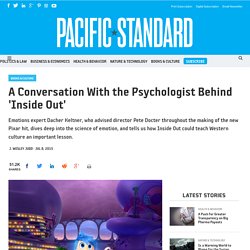 The studio's most recent effort, the box-office topping and critically acclaimed Inside Out, takes viewers inside the head of a young girl named Riley, imagining what it would be like if her feelings could feel. While Inside Out is ultimately an animated children's movie, the perfectionists at Pixar (which is owned by the Walt Disney Company) still took the task of personifying emotions very seriously. To ensure they translated complex psychological issues accurately and clearly, they turned to two of the leading minds in the study of emotions, Paul Ekman and Dacher Keltner. So take me to the beginning: How did you get involved with the making of Inside Out? I met [Inside Out director] Pete Docter at an Association for Psychological Science conference seven or eight years ago. There are pretty good studies by Linda J. Self Knowledge Through NumbersQuantified Self. Are Wearables the Modern Path to Self-Awareness?

Above the entrance of the Oracle of Delphi there was a famous inscription that translated as "Know Thyself. 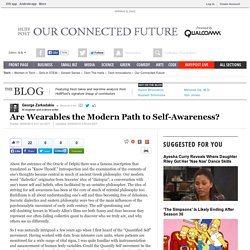 " Introspection and the examination of the contents of one's thoughts became central in much of ancient Greek philosophy. Our modern word "dialectics" originates from Socrates' idea of "dialogue"; a conversation with one's inner self and beliefs, often facilitated by an outsider philosopher. The idea of striving for self-awareness has been at the core of much of oriental philosophy too: Buddhism is all about understanding one's self and thus becoming free of delusions. Socratic dialectics and eastern philosophy were two of the main influences of the psychoanalytic movement of early 20th century. Textile & Apparel News Articles. Product Fitness 80 Exhibition by Muji, London – UK.

A temporary exhibition at London’s Design Museum explores a unique premise: what would happen if we used 20 per cent less materials and energy to make products? 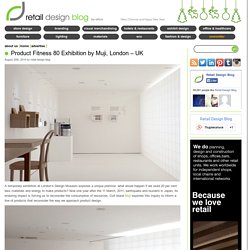 Now one year after the 11 March, 2011, earthquake and tsunami in Japan, its enduring impact is forcing us to reconsider the consumption of resources. Cult brand Muji explores this inquiry to inform a line of products that reconsider the way we approach product design. Inspired by a Japanese proverb which encourages you to ‘eat in measure and defy the doctor,’ the Product Fitness 80 design process employs a little restraint to impact a big difference.

Gaze-activated dresses with eye-tracking technology by Ying Gao. Fashion designer Ying Gao has fabricated a pair of dresses that writhe around and light up when someone stares at them (+ movie). 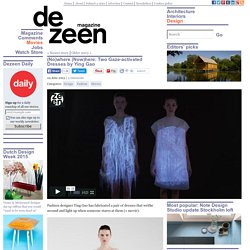 "We use an eye-tracking system so the dresses move when a spectator is staring," Ying Gao told Dezeen. "[The system] can also turn off the lights, then the dresses illuminate. " The gaze-activated dresses are embedded with eye-tracking technology that responds to an observer's gaze by activating tiny motors to move parts of the dresses in mesmerising patterns. One dress is covered in tendrils of photo-luminescent thread that dangle from ruched fabric. On the other, glow-in-the-dark threads form a base layer with fabric cut into ribbons loosely bunched over the top.

With the lights off they create an effect similar to glowing sea creatures. Exhibit design. Pauline Gorelov Projects. Hyperstructure Plastic 07.12.2012. 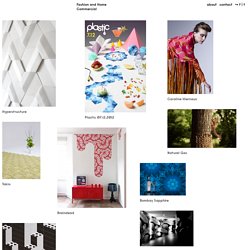 Silver blonde. Secrets of the Brain. Van Wedeen strokes his half-gray beard and leans toward his computer screen, scrolling through a cascade of files. We’re sitting in a windowless library, surrounded by speckled boxes of old letters, curling issues of scientific journals, and an old slide projector that no one has gotten around to throwing out. “It’ll take me a moment to locate your brain,” he says.

On a hard drive Wedeen has stored hundreds of brains—exquisitely detailed 3-D images from monkeys, rats, and humans, including me. Wedeen has offered to take me on a journey through my own head. “We’ll hit all the tourist spots,” he promises, smiling. Rijksmusem x Etsy GUILD of '14 : MASHA REVA. Luscious Rosehip Lips. Augmented-Skin-by-Miyamoto-Kazushi_dezeen_468_16.jpg (JPEG Image, 468 × 297 pixels) The BitTorrent Interview: Marco Weber On Children of the Machine.

The first original content series and a new funding model come to BitTorrent Bundle. BitTorrent Bundle started out as an alpha experiment in content sustainability: as a way to provide artists with creative options and a direct connection to fans. Since the project launched in 2013, we’ve added over 10 thousand publishers to our platform, and over 2 million new and archival titles.

We’ve seen new storytelling models unfold — 3D-printed music videos, and community-sourced albums. And in just over 365 days, we’ve seen a new digital community come together around the arts, with over 100 million Bundle downloads, and counting. LSN : Seed : Cyber space: Accessible art for the internet age. Surfaces that use "hacked" bacteria to detect dirt or clean themselves. Buildings in the future could feature floors embedded with synthetic bacteria that eat dirt and clean your feet, according to this project by design student Tashia Tucker (+ slideshow). Called Synthetic Biology: The Future of Adaptive Living Environments, the project explores how synthetic biology could be used in architecture to create smart surfaces impregnated with bacteria. "I think within the next 10 years we will start to see these biologically designed surfaces being developed in labs, and within the next 15-20 years being available to the public," Tucker told Dezeen. Tucker simulated ways that bacteria might perform tasks such as cleaning, changing the properties of surfaces according the users' needs or alerting humans to the presence of toxic substances for the project, which she developed during a course at the Design Futures Lab at Drexel University in Philadelphia.

Will Future Art Galleries Be On The Human Body? Anthony Antonellis is an internet-based artist, curator, quasi-cyborg, and creator of netartnet.net--an online directory for the “expanded netart universe”. His work often consists of gentle interventions into what we desire from our internet-mediated interactions.

Recent works include Facebook Bliss, a “likes”, “messages”, and “friend requests” generator and #TriggerTreat, a personalized terrorism-related keyword producer that has the dual purpose of allowing the user to act on a secret desire to capture the NSA’s interest (aka to troll the NSA), while oversaturating the mechanisms of the domestic espionage machine. Science Trend Report / Science Market Research - #1 IN TREND REPORTS. SciencePro Trend Report Techabetes Digital Health Trackers Farmed Creationism Pheromone-Infusion.

Responsive Environments. Unanime Spaces Concept - Unanime Spaces is the Architecture and Interior Design branch of Unanime Group. We can count on a team of professionals that offer their services in order to make the architecture and interior design projects of our clients come true. We are experts and in Unanime Space we constitute a young but experienced team in the Architecture Design, Interior Design and Computer Graphics fields; moreover, we develop comprehensive projects for companies and stores. Creative Cloud. Top 5 News Stories 2014-11-28. Robo Sapiens: social inequality in a post-human age. Human extinction may be nearer than you think. Biotechnology is evolving at an exponential rate, and the barriers between man and machine are being rapidly redefined.

Leading bio-ethicist on the technological modification of humans. How consumers feel about data gathering. What is biohacking and why should we care? Basic_title_font. Pay growth beats inflation as jobless total falls, ONS says. 12 November 2014Last updated at 05:33 ET UK unemployment fell by 115,000 between July and September to 1.96 million, according to the Office for National Statistics (ONS). Foot Science / Retail Strategy, Packaging + Merchandising / DNA. The Challenge Since their humble origins in the 1970s, Foot Science International (Foot Science) has grown into a major brand with distributors worldwide. Power dressing. Because Some Days You Just Want To Customize Your Pizza On A Giant Touchscreen Tabletop. Seoul exhibition puts Korean architect Minsuk Cho in the spotlight. Utopia Arkitekter reveals designs for jewel-inspired offices in Sweden.