How to View Passwords Hidden Under Asterisks [Video] Google Chrome, Firefox and other browsers hide passwords behind asterisks but you can easily view the saved passwords using the built-in developer tools. 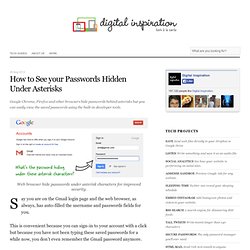 Web browser hide passwords under asterisk characters for improved security. Say you are on the Gmail login page and the web browser, as always, has auto-filled the username and passwords fields for you. This is convenient because you can sign-in to your account with a click but because you have not been typing these saved passwords for a while now, you don’t even remember the Gmail password anymore. All web browsers, for security reasons, mask the password fields in login forms behind asterisk characters thus making it impossible for passersby to see your secret string. There’s however an easy workaround that will let you convert those asterisks into the actual password and you don’t need any external utilities or bookmarklets for this. Right-click the password field and then choose “Inspect Element.” How Hackers Protect Themselves From Getting Hacked.

When Adrian Lamo goes online, he leaves nothing to chance. 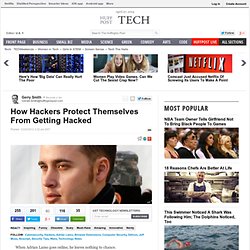 To log in to personal accounts, he uses a digital password generator -- a plastic key chain-like device that displays a new string of digits every 60 seconds. He adds an extra layer of security to some accounts by entering a special code that he receives via text message. And he uses browser extensions to avoid downloading malware by accidentally visiting dangerous Web sites. Some techniques “may seem like a ‘Mission Impossible’ level of security to the average user," Lamo said. But the average user could learn a thing or two from hackers like Lamo, who are not only skilled at breaking into others' PCs, but have devised sophisticated -- in some cases, extreme -- methods for protecting their own.

It has become increasingly easy to fall victim to hackers, from downloading malicious email attachments to logging in to fake banking sites. Two summers ago, I attended DefCon, which Moss hosts every August in a Las Vegas hotel. Hack This Site! DIY Continuous Ink Printer. Instead of paying for absurdly priced printer cartridges, build yourself a Continuous Ink Printer (CIS) which can be made by hacking an old printer to suck ink from external reservoirs. 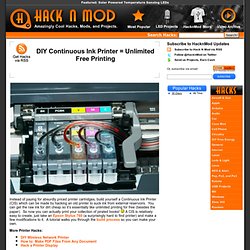 You can get the raw ink for dirt cheap so it’s essentially like unlimited printing for free (besides the paper). So now you can actually print your collection of pirated books! A CIS is relatively easy to create, just take an Epson Stylus 760 (a surprisingly hard to find printer) and make a few modifications to it. A tutorial walks you through the build process so you can make your own. 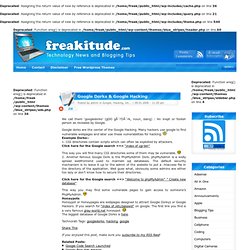 How to use Google for Hacking. Google serves almost 80 percent of all the search queries on the Internet, proving itself as the most popular search engine. 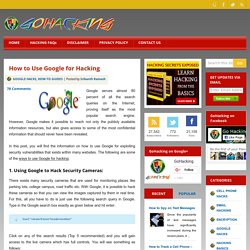 However, Google makes it possible to reach not only the publicly available information resources, but also gives access to some of the most confidential information that should never have been revealed. Painfully Computer Pranks ~ Computer Hacking. Computer pranks to freak out your friends and make them crying for mummy I've been posting many articles about computer pranks on this blog (Deadly Virus Prank, The Ultimate Virus, How to Create a Fake and Harmless Virus and Facebook Virus Prank). 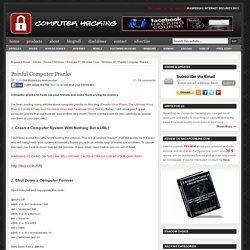 Computer Hacking Forensic Investigator vs 4.0. CT Makerspace Twitter News. Hackerspaces.nl - De verenigde Nederlandse hackerspaces en organisaties. How to use Google for Hacking. Google serves almost 80 percent of all search queries on the Internet, proving itself as the most popular search engine. 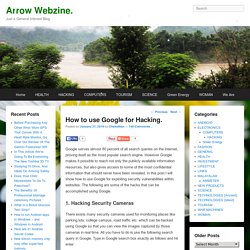 However Google makes it possible to reach not only the publicly available information resources, but also gives access to some of the most confidential information that should never have been revealed. In this post I will show how to use Google for exploiting security vulnerabilities within websites. The following are some of the hacks that can be accomplished using Google. 1. Hacking Security Cameras There exists many security cameras used for monitoring places like parking lots, college campus, road traffic etc. which can be hacked using Google so that you can view the images captured by those cameras in real time. Inurl:”viewerframe? Click on any of the search results (Top 5 recommended) and you will gain access to the live camera which has full controls. Dorks & hacks Big list.