'Tatemae' and 'Honne' in Japanese Society. EL EMPLEO / THE EMPLOYMENT - OPUSBOU. Untitled. I wasn't surprised by Four Corners. Bullying in medicine is as old as the profession. Last night’s Four Corners again laid bare the fraught issue of bullying and harassment in medicine, demonstrating the service that surgeon Gabrielle McMullin did to the profession by highlighting it earlier this year. 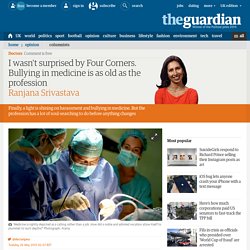 Her blunt comments that trainee Caroline Tan would have been better off giving a surgeon who sexually assaulted her a blow job rather than filing a complaint were decried at the time but her detractors have been sorely disproven as witnessed by the growing calls to shine a light on what is really an open secret in medicine. First, a disclosure. Helen Maroulis, one of the doctors accused of bullying on Four Corners, is one of several surgeons I work with. I send her some of my sickest patients who have developed a brain metastasis needing urgent surgery.

As happens in large hospital systems, I have never met her but she has treated my patients promptly and me cordially. From Pain To Paint: What's Bad For Your Heart Is Good For Your Art. Oh, the twisted pitfalls of heartbreak. 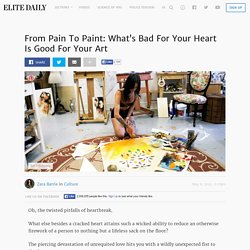 What else besides a cracked heart attains such a wicked ability to reduce an otherwise firework of a person to nothing but a lifeless sack on the floor? The Psychology of Beauty. 5 Reasons Why We All Need To Stop Judging People On First Impressions. Whether you meet someone at a party, go out on a first date or become acquainted to your new boss, first impressions are a guiding point in getting a “feel” for what a person is all about. 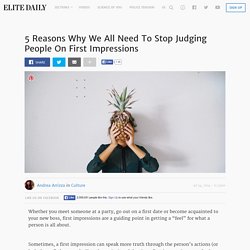 Sometimes, a first impression can speak more truth through the person’s actions (or lack thereof) than words. Yet, the majority of the time, first impressions aren’t always accurate. Beholding beauty: How it's been studied. Beauty. 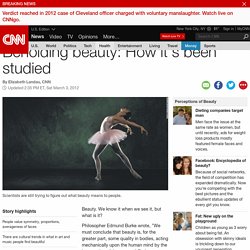 We know it when we see it, but what is it? Philosopher Edmund Burke wrote, "We must conclude that beauty is, for the greater part, some quality in bodies, acting mechanically upon the human mind by the intervention of the senses. " Burke wrote that in 1756, but it's still being quoted today. And scientists are still trying to figure out what makes things and people beautiful. In some ways, it's like asking whether your vision of "red" is the same as someone else's -- there's just no way to know for sure, says Denis Pelli, professor of psychology and neural science at New York University. Still, there's plenty to explore in neuroscience and psychology when it comes to what people find beautiful, to what extent people see beauty in themselves, and what role beauty plays in society. Beauty and the brain Regardless of culture, there appear to be certain patterns of brain activity associated with viewing something you find beautiful.

Brain imaging has been done with facial beauty, too. Focus-on-Minimum-Wages-after-the-crisis-2015.pdf. A Google a Day. Sign up or log in to 750 Words. 101 Things To Do On Study Breaks. Please tell me I’m not the only one chained to my desk these days! 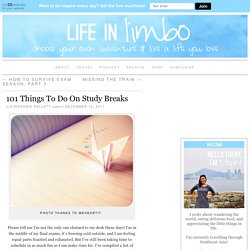 I’m in the middle of my final exams, it’s freezing cold outside, and I am feeling equal parts frazzled and exhausted. But I’ve still been taking time to schedule in as much fun as I can make time for. Why can’t we read anymore? Spending time with friends, or family, I often feel a soul-deep throb coming from that perfectly engineered wafer of stainless steel and glass and rare earth metals in my pocket. 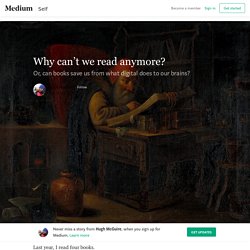 Touch me. Why Do I Wake Up At Night Between 1am and 3am?  - Hamilton Naturopathic Doctor. With the continuous progress of technology, we need to put less and less effort to get the things done. 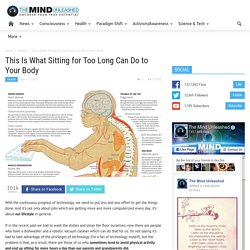 12 Things You Didn't Know there Were Words For. How many times have you pointed under your nose and said “This thingy”? 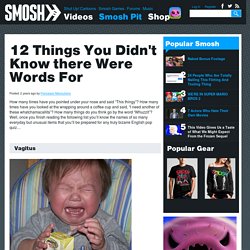 How many times have you looked at the wrapping around a coffee cup and said, “I need another of these whatchamacallits”? How many things do you think go by the word “Whuzzit”? Well, once you finish reading the following list you’ll know the names of so many everyday but unusual items that you’ll be prepared for any truly bizarre English pop quiz… The World Is Sensitive. An ongoing project by Jonathan Harris and Sep Kamvar, We Feel Fine extracts sentences from blogs with the phrase, “I feel…” aggregates them in a colorful interface with the attempt to portray the nature of the world’s feelings in real time. 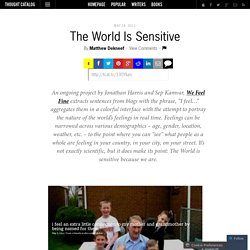 Feelings can be narrowed across various demographics – age, gender, location, weather, etc. – to the point where you can “see” what people as a whole are feeling in your country, in your city, on your street. It’s not exactly scientific, but it does make its point: The World is sensitive because we are. 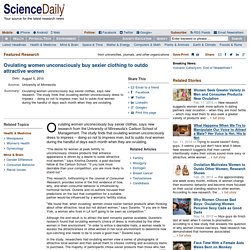 The study finds that ovulating women unconsciously dress to impress -- doing so not to impress men, but to outdo rival women during the handful of days each month when they are ovulating. Why women dress like sluts (Spoiler: it's not the reason you're hoping). Despite protestations against being “objectified,” women still want to be thought of attractive on a purely physical level. No matter how liberated or educated they are, deep down inside, women want to be hot; the kind of hot that makes every man want to have sex with them. Dungeon Fighter Online. When this English game drove everyone crazy.

When they came to a conclusion that contractions make no sense. When they discovered how English does the thing.