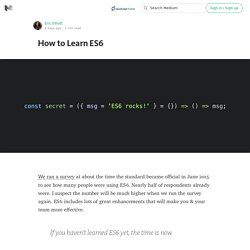 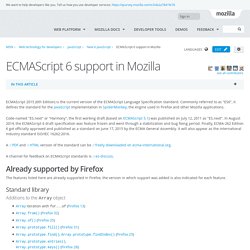 Commonly referred to as "ES6", it defines the standard for the JavaScript implementation in SpiderMonkey, the engine used in Firefox and other Mozilla applications. Code-named "ES.next" or "Harmony", the first working draft (based on ECMAScript 5.1) was published on July 12, 2011 as "ES.next". In August 2014, the ECMAScript 6 draft specification was feature frozen and went through a stabilization and bug fixing period. Finally, ECMA-262 Edition 6 got officially approved and published as a standard on June 17, 2015 by the ECMA General Assembly. It will also appear as the international industry standard ISO/IEC 16262:2016. La veille techno pour les vieux croûtons. ES5, ES6, ES2016, ES.Next: What's going on with JavaScript versioning? 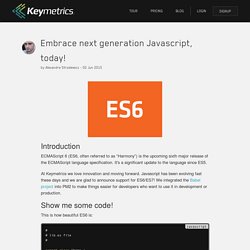 It's a significant update to the language since ES5. At Keymetrics we love innovation and moving forward. Javascript has been evolving fast these days and we are glad to announce support for ES6/ES7! We integrated the Babel project into PM2 to make things easier for developers who want to use it in development or production. Show me some code! This is how beautiful ES6 is: # # lib.es file # export class Shape { constructor (id, x, y) { this.id = id this.move(x, y) } get info() { return `Shape has id ${this.id} and is at ${this.x},${this.y}` } move (x, y) { this.x = x this.y = y }} export class Rectangle extends Shape { constructor (id, x, y, width, height) { super(id, x, y) this.width = width this.height = height }} # # main.es file # import { square, diag, Rectangle } from '.

ES6: The Future is Now. Leave a Comment Posted on June 8, 2015 As web developers, we’re all familiar with the sloth-like pace of web standards from idea to implementation (there’s a reason JS hasn’t changed much over the years). 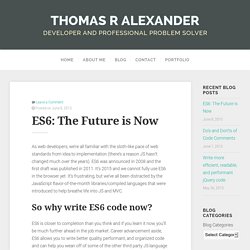 Six Steps for Approaching the Next JavaScript -Telerik Developer Network. The next recommendation/version of the JavaScript standard, also known as "harmony", "ES.next", "ECMAScript 6", "ES6", and most recently "JavaScript/ECMAScript 2015", is pretty much cemented. 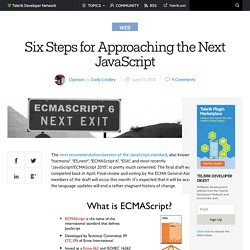 The final draft was actually completed back in April. Final review and voting by the ECMA General Assembly members of the draft will occur this month. It’s expected that it will be accepted and the language updates will end a rather stagnant history of change. Once approved, only minor editorial corrections will be permitted. And then, it’s on like Donkey Kong! If your answer to that question is, "Nope" or "I don’t care yet", then I’d encourage you to explore the real-world usages of ES6 in the wild. The ES2015 Nightmarefile. They tried to cover this up. 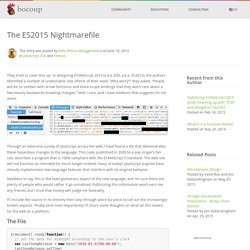 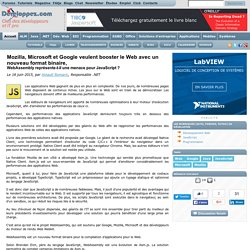 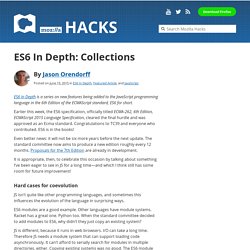 Earlier this week, the ES6 specification, officially titled ECMA-262, 6th Edition, ECMAScript 2015 Language Specification, cleared the final hurdle and was approved as an Ecma standard. Congratulations to TC39 and everyone who contributed. Kpdecker.github. Maintained by @kpdecker. 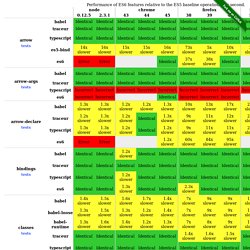 Run on Saturday, July 04, 2015 using babel 5.6.15, babel-runtime 5.6.15, and traceur 0.0.90. For each of the ES6 features in question, a ES5 implementation of that functionality was written along with a ES6 version. It should be noted that the functionality is frequently the same, but in some cases the "common" vs. WebAssembly, vers un web compilé ? ES6 Interactive Guide. 20 Years of PHP, by Ben Ramsey. Twenty years ago today, Rasmus Lerdorf released Personal Home Page Tools (PHP Tools) version 1.0 to the world. 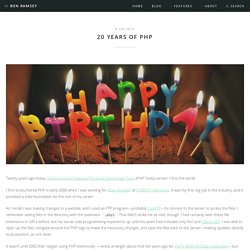 I first encountered PHP in early 2000 when I was working for Brian Rudolph at EUREKA! Interactive. It was my first, big job in the industry, and it provided a solid foundation for the rest of my career. As I recall, I was making changes to a website, and I used an FTP program—probably CuteFTP—to connect to the server to access the files. Hypertext Preprocessor. PHP 7 to Be Even Faster Than Expected - Lately in PHP podcast episode 60 - PHP Classes blog. This Podcast is Sponsored by Hotjar - All-in-one Analytics and Feedback - at a fraction of the cost. Hotjar is a new powerful tool that reveals the online behavior ​and voice​ of your users.

By combining both A) Analysis ​and B) ​Feedback​ tools Hotjar gives you the ‘big picture’ of how to improve your site's user experience and performance (conversion rates). The Analysis tools allow you to measure and observe user behavior (what users do) while the Feedback tools allows you to hear what our users say (Voice of User / Customer).

The additional structures for complex zval values all use a common header, which is defined by zend_refcounted: struct _zend_refcounted { uint32_t refcount; union { struct { ZEND_ENDIAN_LOHI_3( zend_uchar type, zend_uchar flags, uint16_t gc_info) } v; uint32_t type_info; } u;}; Hypertext Preprocessor. We are continuing to work through the repercussions of the php.net malware issue described in a news post earlier today. As part of this, the php.net systems team have audited every server operated by php.net, and have found that two servers were compromised: the server which hosted the www.php.net, static.php.net and git.php.net domains, and was previously suspected based on the JavaScript malware, and the server hosting bugs.php.net. The method by which these servers were compromised is unknown at this time. All affected services have been migrated off those servers. We have verified that our Git repository was not compromised, and it remains in read only mode as services are brought back up in full.

As it's possible that the attackers may have accessed the private key of the php.net SSL certificate, we have revoked it immediately. To summarise, the situation right now is that: Over the next few days, we will be taking further action: Changes to Engine Exceptions in PHP 7.0alpha2+ This blog post is about PHP 7.0 which at the time of writing is currently pre-release software (7.0.0alpha2) and subject to change.

PHP 7 Benchmarks. If you know anything at all about PHP7, you probably know it's fast. But did you know how fast? The alpha is out and looks very robust, so I decided I would create a new set of benchmarks to include it. Graphs first, disclaimers later :) This graph shows the time it takes for each version of PHP to perform the same task, on average, with oldest PHP on the left and moving forward in time. PHP 7 and script languages future: insights from lead Zend.com developer. Getting Ready for PHP 7. July 15, 2015 · 22 Comments. PHP 7 Anonymous Classes Tutorial - PHP Classes blog.

Yet to Release PHP 7 Expected Features and Advantages. Have you been waiting for the release of PHP 7 ? News Archive - 2015.