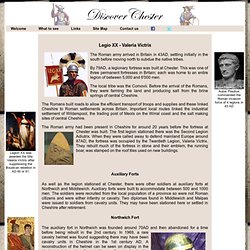 By 79AD, a legionary fortress was built at Chester. This was one of three permanent fortresses in Britain; each was home to an entire legion of between 5,000 and 6'000 men. The local tribe was the Cornovii. Before the arrival of the Romans, they were farming the land and producing salt from the brine springs of central Cheshire. The Romans built roads to allow the efficient transport of troops and supplies and these linked Cheshire to Roman settlements across Britain. The Roman army had been present in Cheshire for around 20 years before the fortress at Chester was built. The first legion stationed there was the Second Legion Adiutrix. Auxiliary Forts As well as the legion stationed at Chester, there were other soldiers at auxiliary forts at Northwich and Middlewich. Northwich Fort being rebuilt in the 2nd century. Middlewich Fort Castra Deva. Legio XX - Reenactment. The Twentieth Legion was founded in 1991 to recreate the soldiers of the Roman Army for public demonstrations and living history displays.

Our weapons, armor, and accoutrements are all carefully researched, and reconstructed at our own expense. Our troops demonstrate the tactics of the day, and the use of the legionary's various weapons. We can discuss many aspects of Roman army life, and will sometimes spend a day or weekend living like our ancient counterparts did on campaign. We also have a civilian contingent which displays daily life in the ancient Roman world. Our recreated Twentieth Legion usually portrays the legionaries based in Britain in the mid-first century AD, but auxiliary troops or legionaries from other eras may also be represented.

The group is based in the Washington, D.C. area. If you are not in our general area, see the Links page for a long list of other Roman groups in the US and around the world. Copyright Matthew R. Chester - Wikipedia - LEg XX castrum. Coordinates: Chester (/ˈtʃɛstər/ CHESS-tər), is a city in Cheshire, England. 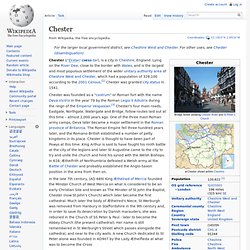 Lying on the River Dee, close to the border with Wales, and is the largest and most populous settlement of the wider unitary authority area of Cheshire West and Chester, which had a population of 328,100 according to the 2001 Census.[2] Chester was granted city status in 1541. Chester was founded as a "castrum" or Roman fort with the name Deva Victrix in the year 79 by the Roman Legio II Adiutrix during the reign of the Emperor Vespasian.[3] Chester's four main roads, Eastgate, Northgate, Watergate and Bridge, follow routes laid out at this time – almost 2,000 years ago. 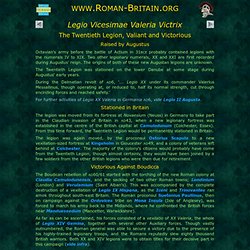 Two other legionary numerals, XX and XXI are first recorded during Augustus' reign. The origins of both of these new Augustan legions are unknown. The Twentieth Legion was stationed on the lower Danube at some stage during Augustus' early years. Deva Victrix - Wikipedia. Deva Victrix, or simply Deva, was a legionary fortress and town in the Roman province of Britannia.[1] The settlement evolved into Chester, the county town of Cheshire, England. 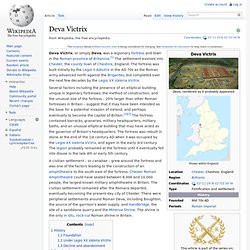 The fortress was built initially by the Legio II Adiutrix in the AD 70s as the Roman army advanced north against the Brigantes, but completed over the next few decades by the Legio XX Valeria Victrix. Several factors including the presence of an elliptical building unique in legionary fortresses, the method of construction, and the unusual size of the fortress – 20% larger than other Roman fortresses in Britain – suggest that it may have been intended as the base for a potential invasion of Ireland, and perhaps eventually to become the capital of Britain.[2][3] The fortress contained barracks, granaries, military headquarters, military baths, and an unusual elliptical building that may have acted as the governor of Britain's headquarters. 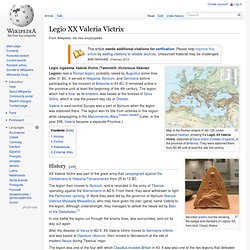 They were stationed there from AD 88 until at least the late 3rd century. Moulded antefix roof tile showing the badge and standard of Legion XX, from Holt, Clwyd, Wales Valeria in east-central Europe was a part of Illyricum when the legion was stationed there. The legion won its title from victories in this region while campaigning in the Marcomannic Wars. [citation needed] (Later, in the year 296, Valeria became a separate Province.) History[edit] XX Valeria Victrix was part of the great army that campaigned against the Cantabrians in Hispania Tarraconensis from 25 to 13 BC.