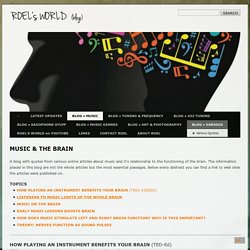 LISTENING TO MUSIC LIGHTS UP THE WHOLE BRAINDate: December 6, 2011 Source: Suomen Akatemia (Academy of Finland) Finnish researchers have developed a groundbreaking new method that allows to study how the brain processes different aspects of music, such as rhythm, tonality and timbre (sound color) in a realistic listening situation. 432 Hz, Lost Chord and New Beam. When dawn rolled across the parallel Earth, it was a new planet. 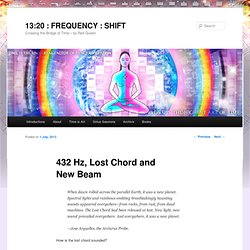 Spectral lights and rainbows emitting breathtakingly haunting sounds appeared everywhere–from rocks, from rust, from dead machines. The Lost Chord had been released at last. New light, new sound prevailed everywhere. And everywhere, it was a new planet. —Jose Arguelles, the Arcturus Probe. How is the lost chord sounded? Recently the 432 Hz as the natural frequency of sound vibration (as opposed to 440 Hz) was brought back to my attention by Randy Bruner/Cosmic Hand (see his blog here).

I began writing this article on 4 Wizard, Galactic Signature of Bob Marley, only to realize that Bob Marley, along with Jimi Hendrix tuned their instruments to this frequency (Pythagorean tuning in A Major). Unified Resonance The Mayan definition of human being is cosmic vibratory root. 432Hz (Eng) « Freek Zwanenberg. Where to start The term ‘432hz’ refers to the reference (or concert) pitch, a tone to which a whole instrument is tuned: the tone middle A, vibrating 432 times per second (= hertz = hz). 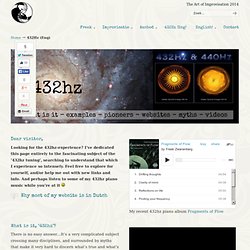 An example: think of someone that uses a tuning fork to tune his guitar. This tuning fork normally is an A=440hz. By using this reference note, the guitarist tunes all his strings so they sound well together. If the guitarist would have a tuning fork A=432hz (which I recommend!) So technically, the difference between 440hz and 432hz is only 8hz, a very subtle difference. Since the standardisation in 1955, practically all produced music in the West has been tuned to A=440hz. For an excellent explaining of terms like tuning and frequency, go to Roel Hollander’s page. Equal temperament vs Pythagorean temperament So far so good. The so-called ‘Pythagorean temperament’, used only until 17th century, consists of very sound mathematical intervals between the notes, like ⅔ or 9/8.

Mathemagical Music - Home. Information for Musicians 432 Hz - Wikileaks. Sound and music consist of vibrations, the more vibrations per second, the higher the pitch. 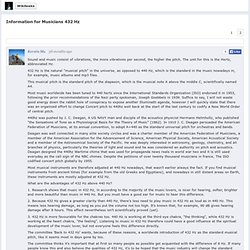 The unit for this is the Hertz, abbreviated Hz. 432 Hz is the natural "musical pitch" in the universe, as opposed to 440 Hz, which is the standard in the music nowadays in, for example, music albums and mp3 files. This musical pitch is the standard pitch of the diapason, which is the musical note A above the middle C, scientifically named A4. Most music worldwide has been tuned to 440 hertz since the International Standards Organization (ISO) endorsed it in 1953, following the prior recommendations of the Nazi party spoksman, Joseph Goebbels in 1939. Suffice to say, I will not waste good energy down the rabbit hole of conspiracy to expose another Illuminatti agenda, however I will quickly state that there was an organised effort to change Concert pitch to 440hz well back at the start of the last century to codify a New World Order of central pitch. 440hz was pushed by J. 1. 2. 1. 2. 5. 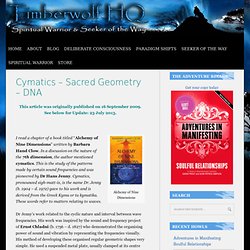 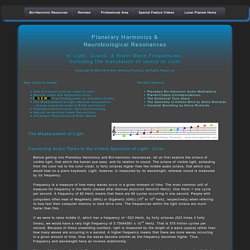 Musical notes and Keyboard colors. Play Pythagorean vs. Broken Matrix. The Importance of 432Hz Music. Article By: Brian T Collins Can the current international concert pitch of music somehow be improved to create a more resonant and pleasant positive experience for both the musician and the listener? 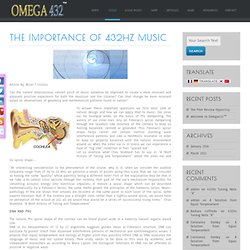 Can that change be more resonant based on observations of geometry and mathematical patterns found in nature? To answer these important questions we first must look at natural design and how we can apply that to music. Our inner ear for example works on the basis of Phi dampening. 432 : Cosmic Key. 432 Docs. Musings on healing and spirituality. Music tuned to A=432Hz/C=256Hz harmonizes with the speed of light, the human light body, the Earth’s rotation, the size and movement of other celestial bodies and Tiger Woods’ golf ball. 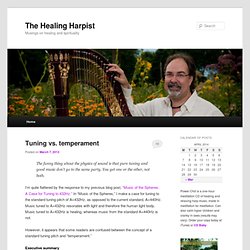 A couple years ago I didn’t give a second thought about using or not using the standard tuning pitch, A=440Hz, for sound healing. Why would it matter?