Music plays an integral role in the life of Native Americans. It is used for ceremonial purposes, recreation, expression, and healing. There are many different instruments used when making Native American music, including drums, flutes, and other percussion instruments. John Two-Hawks Music Videos - Official JTH YouTube Channel Playlist - Native American Flute Music of John Two-Hawks. History of Reggae - The Reggaskas. Reggae is a term that was coined sometime close to 1960. 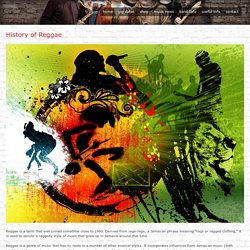 Derived from rege-rege, a Jamaican phrase meaning “rags or ragged clothing,” it is used to denote a raggedy style of music that grew up in Jamaica around that time. Reggae is a genre of music that has its roots in a number of other musical styles. It incorporates influences from Jamaican music (both traditional Mento and contemporary Ska), as well as American Rhythm & Blues, which was broadcast from high-powered stations in New Orleans and Florida in the early days of radio, and could be easily picked up in Jamaica. Reggae’s closest musical relations are Ska and Rocksteady, popular in Jamaica during the 1950s and early 1960s. Reggae evolved from these other genres, really coming into its own later that decade. Jah Cure - Life We Live (video+lyrics) Lyrics to Life We Live by Jah Cure Every time you take one step Something pulls you back But you get back up each time you fall (aye) Wicked people and bad mind Lurking in the dark But I have no fear I walk with Jah (aye) Turn the world off And turn the music on Just light up another one Relax and just close your eyes (oh ooh) Natural mystic is in the air Bob Marley says have no fear Everything is going to be alright Some days you’re up and some you’re down Weak today, tomorrow strong Some you’ll lose and some you’re going to win (aye) That’s the life the life the life the life we live The life the life we live (wooo wooo wooo) 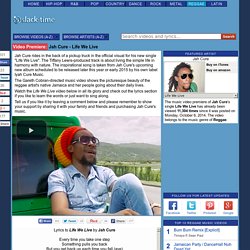 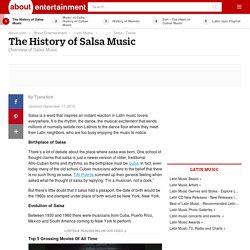 Salsa is a word that inspires an instant reaction in Latin music lovers everywhere. It is the rhythm, the dance, the musical excitement that sends millions of normally sedate non-Latinos to the dance floor where they meet their Latin neighbors, who are too busy enjoying the music to notice. Salsa Music Video Mix Vol 1. What is Tejano Music? (with pictures)

Tejano music is from the Mexican origin population of Texas and is sung in Spanish. 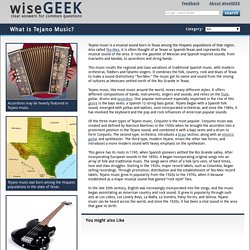 While Tex-Mex is not Tejano because Tex-Mex is bilingual, as in the Texas Tornados song, “Hey Baby, Que Paso.” Regional Mexican and Musica Tejana, not Tejano, are all-inclusive of the sounds of the different ensembles such as orquesta, conjunto, norteño, grupo, banda, mariachi, trio, tropical/cumbia, vallenato and includes Tejano. (Burr, 1999, Peña, 1999) Tejano music incorporates many standard evergreen Mexican music compositions in the ranchero style such as “Tu, Solo, Tu,” and “El Rey” by Jose Alfredo Jimenez. CUMBIAS TEX MEX MEGAMIX. Louisiana101.com - Reading/Research Room. The following summary of the history of Cajun, Creole, and Zydeco music is based entirely on information included in the sources listed at the bottom of the page. 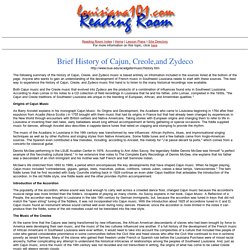 Anyone who wants to gain an understanding of the development of French music in Southwest Louisiana needs to start with these sources. The best way to experience the history of Cajun, Creole, and Zydeco music first hand is to listen to the many historical recordings now available. Both Cajun music and the Creole music that evolved into Zydeco are the products of a combination of influences found only in Southwest Louisiana. Zydeco Creole Cajun Swamp - Youtube Music Video Channel Playlist. The Browse Music Videos You Tube Channel & Playlist Community Google Sites - Band, Music Posters and T Shirts | Rock Music Podcast Directory Gooogle Plus Bands & Fans All Rock Genres Music Community Google Plus Bands, Musicians & Music Industry CircleBack Community Community of G+ musicians who circle back other G+ musicians Copyright © 2015, YouTube Music Channel - Austin Texas USA. 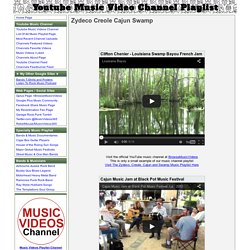