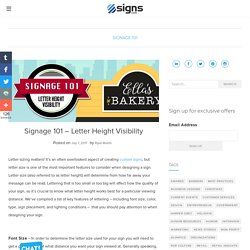 It’s an often overlooked aspect of creating custom signs, but letter size is one of the most important features to consider when designing a sign. Letter size (also referred to as letter height) will determine from how far away your message can be read. Lettering that is too small or too big will affect how the quality of your sign, so it’s crucial to know what letter height works best for a particular viewing distance. We’ve compiled a list of key features of lettering – including font size, color, type, sign placement, and lighting conditions – that you should pay attention to when designing your sign. 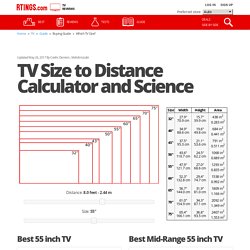 What is the most commonly comfortable tilt angle to set TV on a tiltable wall mountings ? Ie: All of DaVinci's great paintings, like the Mona Lisa, have subjects' eye elevation located a distance of 68% above the base of the painting. There is no fixed answer because it depends on what you are watching. For example, if you play video games, the ideal height would vary between first person and third person games.

For TV shows, are you watching a sitcom, or the news? My viewing distance is 13 feet and want to buy 4k sony. Go for 65". I am planning on buying a 46 inch 3D LED TV (Samsung or LG). I am shocked at how many people do not read the distance/size chart and ask the same questions over and over. Haha, yes. What is the minimum and maximum distance for a 40" 1080p HD TV? You benefit from the 1080p resolution closer than 7.8 ft, and you will see pixels at 5.2 ft. What TV size would be best for the corner of a family room? Yes. Yes. Cursos de Estampado y Serigrafía Textil. Video Tutorial — Reviewing Adobe Illustrator's Extensive Gradients Toolset.

Preparing Artwork for Screen Printing in Adobe Illustrator. Advertisement Getting t-shirts printed is an ideal way to promote your business, organization or event. 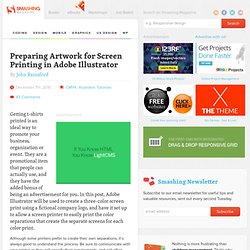 They are a promotional item that people can actually use, and they have the added bonus of being an advertisement for you. In this post, Adobe Illustrator will be used to create a three-color screen print using a fictional company logo, and have it set up to allow a screen printer to easily print the color separations that create the separate screens for each color print. Although some printers prefer to create their own separations, it’s always good to understand the process. Be sure to communicate with your printer as they will specify their requirements, and will often give you tips for avoiding potential issues in the process.

Printing Techniques As the t-shirt is going to be printed in three colors, we have to create separate artwork for each layer of color. Examples of Trap, Knockout and Overprint. 5 Simple Tricks To Bring Light and Shadow Into Your Designs. Advertisement There’s just no escaping light and shadow — it’s everywhere you look. 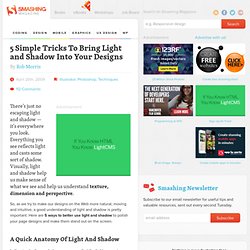 Everything you see reflects light and casts some sort of shadow. Visually, light and shadow help us make sense of what we see and help us understand texture, dimension and perspective. So, as we try to make our designs on the Web more natural, moving and intuitive, a good understanding of light and shadow is pretty important. How to Create a Rocketing, Vector Aircraft Shuttle. In this tutorial, we'll be creating a illustration of a speeding aircraft shuttle. 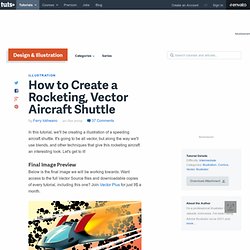 It's going to be all vector, but along the way we'll use blends, and other techniques that give this rocketing aircraft an interesting look. Let's get to it! Final Image Preview Below is the final image we will be working towards. Want access to the full Vector Source files and downloadable copies of every tutorial, including this one? Step 1 Start sketching the image you want to draw in a new layer. Step 2 Since I will trace the sketch using a black stroke so I change the outline color to orange. Tips: never use an outline color the same as the sketch, as you will have difficulty in differentiate them when tracing. Step 3 Start tracing the body with the Pen Tool in a new layer above the "SKETCH" layer. Step 4. Tips for Working with the Gradient Mesh Tool In Illustrator. A few times a each month we revisit some of our reader’s favorite posts from throughout the history of Vectortuts+. 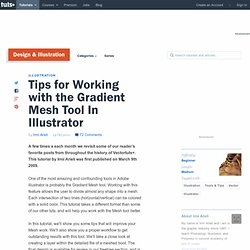 This tutorial by Irmi Arieli was first published on March 9th 2009. One of the most amazing and confounding tools in Adobe Illustrator is probably the Gradient Mesh tool. Working with this feature allows the user to divide almost any shape into a mesh. Each intersection of two lines (horizontal/vertical) can be colored with a solid color. This tutorial takes a different format than some of our other tuts, and will help you work with the Mesh tool better. In this tutorial, we'll show you some tips that will improve your Mesh work. 1. The Secrets of the Appearance Panel: Multiple Fills. In this tutorial, we'll explore the Adobe Illustrator Appearance panel and learn to create objects that look like groups of many shapes, but consist of only one shape with multiple fills applied, with no brushes used. 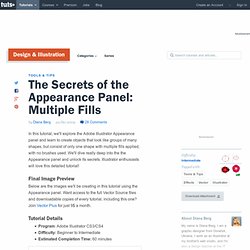 We'll dive really deep into the the Appearance panel and unlock its secrets. Illustrator enthusiasts will love this detailed tutorial! Final Image Preview Below are the images we'll be creating in this tutorial using the Appearance panel. Learn Photo Editing. How to Control Gradient Fills in Adobe Illustrator. Topic: Adobe IllustratorDifficulty: beginnerEstimated completion time: 15 minutes Gradient fills are used to create transitions between colors. 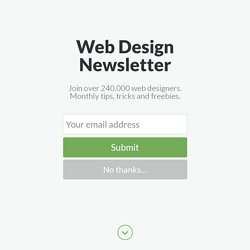 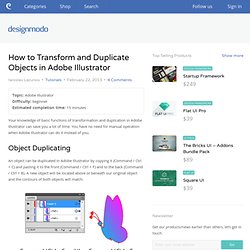