5 Benefits of Medical Mobile Solutions to Patients. The increasing dependency consumers have on mobile devices has led to the discovery of the technology’s potential to revolutionize the medical sector. 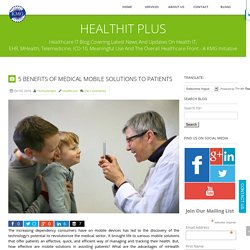 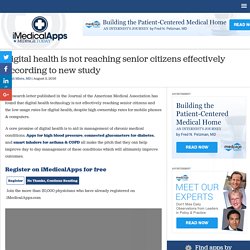 A core promise of digital health is to aid in management of chronic medical conditions. Apps for high blood pressure, connected glucometers for diabetes, and smart inhalers for asthma & COPD all make the pitch that they can help improve day to day management of these conditions which will ultimately improve outcomes. In this study, researchers from Brigham & Women’s Hospital looked at data from the National Health and Aging Trends Study (NHATS) which surveys Medicare patients over the age of 65 annually.

Part of that survey includes questions on use of technology in general, as well as use of technology for health management. Fortune. You may never have heard of Validic, but if you’ve ever sent your doctor data from your Fitbit, smart scale, glucose meter or another wearable device or health tracker, chances are Validic was involved. 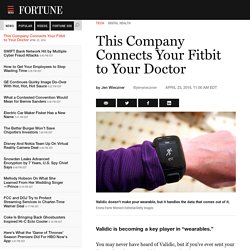 The North Carolina-based startup connects with more than 270 of the myriad health-monitoring devices on the market, collecting data from more than 223 million people across the world who have agreed to let Validic’s customers monitor their fitness and wellbeing. (For more on the intersection of technology and health, read the feature “Can Sean Parker Hack Cancer? “, from our May 1, 2016 issue.) Validic, which has raised more than $18 million—much of which came from Kaiser’s venture capital arm—doesn’t monitor patients itself. Rather, it acts as a conduit and dashboard for all the incongruous data streams from various mobile gadgets and apps—which would otherwise be impossible for doctors and health systems to keep up with and compare. New project monitors social media for signs of mental illness - Trending.

Every minute of every day, approximately 347,000 tweets, 293,000 Facebook statuses and 400 hours worth of YouTube videos are uploaded to the web — along with astronomical amounts of information about social media users' lives and habits. Marketers have been harvesting this data to target ads and develop products for years, but so too have governments, scientists and law enforcement officials in an effort to address other challenges. From predicting epidemics to stopping cyber-terrorists in their tracks, big data has become an invaluable resource across industries worldwide (regardless of how ethically that data is collected).

Soon, it may even be used to identify and monitor people who show signs of mental illness online. On Tuesday, Minister of Science Kirsty Duncan announced more than $48 million in federal funding for 76 research teams across Canada through the Natural Sciences and Engineering Council of Canada's (NSERC) Strategic Partnership Grants. Top 10 Mental Health Apps. With so many apps on the market, it’s hard to know which are useful. 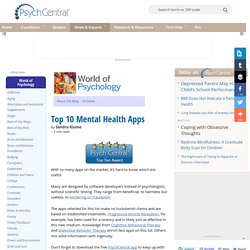 Many are designed by software developers instead of psychologists, without scientific testing. They range from beneficial, to harmless but useless, to bordering on fraudulent. The apps selected for this list make no hucksterish claims and are based on established treatments. Progressive Muscle Relaxation, for example, has been used for a century and is likely just as effective in this new medium. Knowledge from Cognitive Behavioral Therapy and Dialectical Behavior Therapy enrich two apps on this list. Don’t forget to download the free PsychCentral app to keep up with the latest mental health information. 1. Free app that teaches a deep breathing technique useful in fighting anxiety and stress. 2. Literally a lifesaving app, this free intervention tool helps people who are having suicidal thoughts to reassess their thinking and get help. 3. eCBT Calm 4.

Getting enough sleep is one of the foundations of mental health. How Smartphone Apps Can Treat Bipolar Disorder and Schizophrenia. Bryan Timlin always carries an iPhone and an Android phone.

The 57-year-old is an app and graphic designer with a Michigan company called OptHub, but he doesn’t carry two phones for work. He carries the iPhone because that’s what he likes, and he carries the Android because it’s what he needs. The Android phone monitors his behavior. Five years ago, Timlin was diagnosed with rapid-cycling bipolar disorder, a mental illness characterized by four or more manic or depressive episodes a year.

Some episodes, he says, can last as long as eight weeks. Click to Open Overlay Gallery.