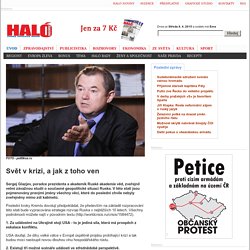 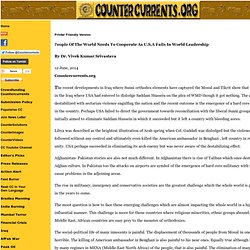 Vivek Kumar Srivastava 12 June, 2014Countercurrents.org. Why Russia and China are united by more than pipeline politics. The recent multi-billion euro deal to pipe gas from Russia to China signals shifting geopolitical and climate hedge bets more than it does a new anti-Western alliance, argues Shaun Breslin Shaun Breslin is a professor of politics and international affairs at the University of Warwick Despite the recent focus on China’s attempts to obtain overseas oil resources to fuel its continued growth, burning coal – either directly or to produce electricity – remains by far the biggest source of Chinese energy. 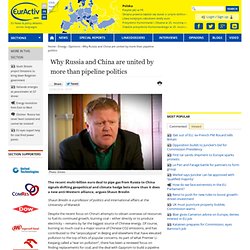 Elita se zoufale snaží zachránit jednopolární svět. America, an Irresistible Force Confronts China, an Immovable Object. U.S., China and the world by worldnewscurator.com A tale of two countries: some years ago China and the U.S. were traveling down the same road, with America in the lead, when they came to a fork in the road. 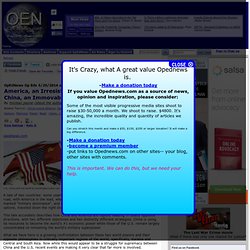 The U.S., saw the sign marked "military dominance", and rushed down the left branch. Memorialize US Military's Worldwide Genocidal Crimes Against Humanity Awaiting Special Trial in ... House to house warsOwner: Jay Janson at opednews.com/author/author1723.html(image by Jay Janson) BACKGROUND of EVENTS LEADING to the ESTABLISHMENT in 2020, of the SPECIAL COURT to TRY US CITIZENS and CITIZENS of NATO NATIONS for GENOCIDEIt's now the year 2022. 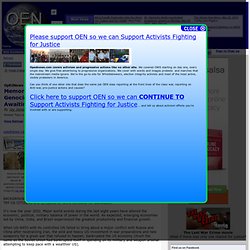 Major world events during the last eight years have altered the economic, political, military balance of power in the world. As expected, emerging economies led by China, India, and Brazil experienced the greatest productivity and financial growth.When US-NATO with its controlled UN failed to bring about a major conflict with Russia and China after neutralizing Iran, the wild and heavy US investment in war preparations and new weaponry for a great war that refused to happen, bankrupted the US economy (much the same as the Soviet Union had bankrupted itself in spending on its military and weapon arsenal attempting to keep pace with a wealthier US). Why War Is Inevitable. Paul Craig Roberts - Russia’s Rise To Global Power. Are We Witnessing the Emergence of a New World Order? An anti-government demonstrator in the Altamira neighborhood of Caracas, Venezuela, February 21, 2014. 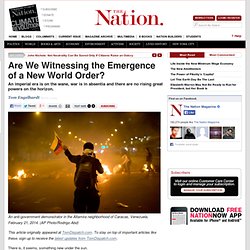 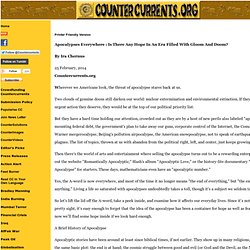 By Ira Chernus 25 February, 2014Countercurrents.org Wherever we Americans look, the threat of apocalypse stares back at us. Two clouds of genuine doom still darken our world: nuclear extermination and environmental extinction. If they got the urgent action they deserve, they would be at the top of our political priority list. But they have a hard time holding our attention, crowded out as they are by a host of new perils also labeled "apocalyptic": mounting federal debt, the government's plan to take away our guns, corporate control of the Internet, the Comcast-Time Warner mergerocalypse, Beijing's pollution airpocalypse, the American snowpocalypse, not to speak of earthquakes and plagues.

Global trends and risks - Dr Maleeha Lodhi. The writer is special adviser to the Jang Group/Geo and a former envoy to the US and the UK. 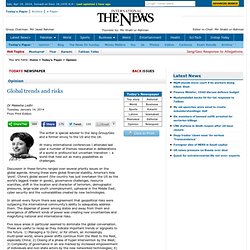 At many international conferences I attended last year a number of themes resonated in deliberations of a world in profound but uncertain transition – a world that held out as many possibilities as challenges. Discussion in these forums ranged over several priority issues on the global agenda. Among these were global financial stability, America’s Asia ‘pivot’, China’s global ascent (the country has just overtaken the US as the world’s biggest trader in goods), governance challenges, resource scarcities, shift in the location and character of terrorism, demographic pressures, large-scale youth unemployment, upheaval in the Middle East, cyber security and the vulnerabilities created by new technologies.

In almost every forum there was agreement that geopolitical risks were outpacing the international community’s ability to adequately address them. 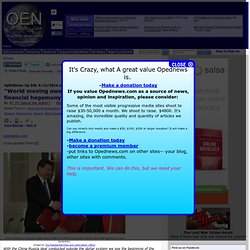 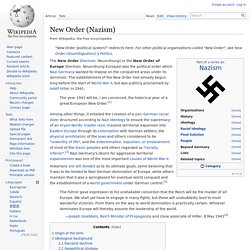 Hegemony. In the 19th century, hegemony came to denote the "Social or cultural predominance or ascendancy; predominance by one group within a society or milieu".