North Korea's internet is shut down AGAIN. Continuous problems today and for nine hours yesterday yesterday could mean North Korea was under cyber attackCybersecurity expert says normal internet failings are 'isolated blips'Unclear if the connectivity problems were an act of retribution for hackThe US has not come forward about the North Korean internet outage but online experts say that it resembles a 'denial of service' attack By Francesca Chambers and Lucy Crossley for MailOnline and Alexandra Klausner for MailOnline Published: 18:46 GMT, 23 December 2014 | Updated: 22:03 GMT, 23 December 2014 North Korea's internet connection has been cut for the second day in a row today, says a US Internet Research group tracking the country's connectivity. 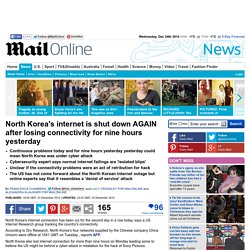 Wii games 'benefit stroke victims' and help them perform simple tasks, researchers say  Top 10 Fun & Educational Apps for Children - Total Education : Total Education. As more and more children become engaged with technology, developers have recognised the opportunity to interest them in learning via their (or their parents’) favourite devices. 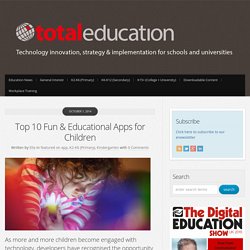 I decided to research some educational children’s apps (I had far too much fun testing them out along the way), and so here are my top 10 fun and educational apps for children. 1) Around the Clock Not only does Around the Clock introduce kids to the concept of time, it also provides them with an understanding of structuring your day. There’s a mini game for every hour of the day, with children being encouraged to understand which activities normally take place at which specific time.

CBRE report warns 50 per cent of occupations will be redundant in 20 years time. Japan's SoftBank Corp is developing human-like robots which it will use to staff its cellphone stores From self-driving cars to carebots for elderly people, rapid advances in technology have long represented a potential threat to many jobs normally performed by people. 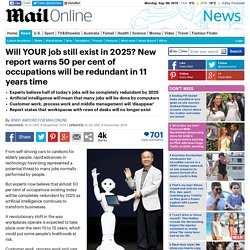 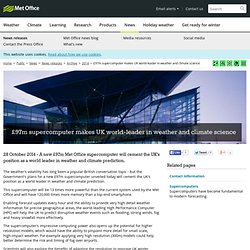 The weather's volatility has long been a popular British conversation topic - but the Government's plans for a new £97m supercomputer unveiled today will cement the UK's position as a world leader in weather and climate prediction. This supercomputer will be 13 times more powerful than the current system used by the Met Office and will have 120,000 times more memory than a top-end smartphone. Enabling forecast updates every hour and the ability to provide very high detail weather information for precise geographical areas, the world-leading High Performance Computer (HPC) will help the UK to predict disruptive weather events such as flooding, strong winds, fog and heavy snowfall more effectively.

Rare 1976 Apple 1 set to fetch £309,000 at Bonhams' History of Science auction. History of Science sale will take place at Bonhams, New York on Wednesday It features books, scientific and technological gadgets, photos, and prints ranging from the 16th to 20th centuriesThis includes a letter by Charles Darwin detailing reproduction of barnaclesIt also features a Helmholtz Sound Synthesizer and an Ada Lovelace sketchThe most expensive item is an Apple 1 computer in ‘excellent condition’ set to fetch between $300,000 and $500,000 (£185,800 and £309,500) 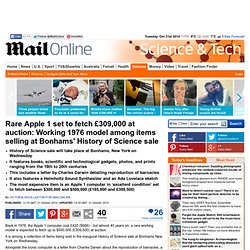 First patient treated for Google Glass addiction. Males patient of Glass for 18 hours a dayComplained of feeling irritable and argumentative without the device Said his dreams occurred with Glass in them By Mark Prigg for MailOnline Published: 18:36 GMT, 14 October 2014 | Updated: 18:51 GMT, 14 October 2014 Doctors have treated the first case of Google Glass addiction. 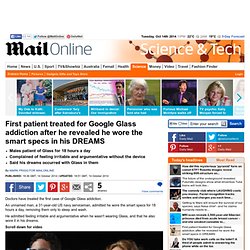 Almost HALF of internet hacks and viruses originate in China. Massachusetts-based Akamai says 43 per cent of internet attacks originate in China according to a representative studyThey about 200 computer systems around the world to monitor connectionsAnd they found that almost half came from China, more than three times Indonesia in second place with 15 per centThe findings were published in their quarterly 'State of the internet' reportHowever Editor of the report David Belson tells MailOnline that the results do not necessarily represent the internet as a wholeHe adds that people can keep themselves safe by keeping their software and systems up to date By Jonathan O'Callaghan for MailOnline Published: 16:06 GMT, 3 October 2014 | Updated: 02:00 GMT, 8 November 2014. 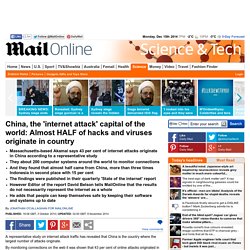 Big robot fleet takes to UK waters. 2 October 2014Last updated at 13:01 ET By David Shukman Science editor, BBC News The BBC's David Shukman: "We are now entering a new era of almost constant observation of the oceans" A fleet of marine robots is being launched in the largest deployment of its kind in British waters. 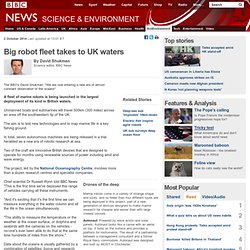 Unmanned boats and submarines will travel 500km (300 miles) across an area off the southwestern tip of the UK. Robot used to carry out knee operations in Glasgow. Using Google Glass at the wheel is 'as distracting as texting': Drivers wearing the headset suffer the same mental delays as phone users. Inbox (9) - jhawkins104 - Gmail. Tetraplegic man walks and stands to give father of the bride speech thanks to robotic suit. Irving Caplan was paralysed in a cycling accident in London in 2012He feared he'd have to deliver his father of the bride speech sitting downBut 'exoskeleton' suit allowed him to walk across venue to address guestsThe £100,000 device was lent to him for the special occasion by Rex BionicsUsing the joystick, the 55-year-old made the 30-pace walk in three minutesHe said guests were 'gobsmacked' and left in tears by his amazing entrance By Richard Spillett for MailOnline Published: 14:47 GMT, 22 September 2014 | Updated: 17:20 GMT, 22 September 2014 For most men, giving a father of the bride speech is one of the proudest moments of their lives. 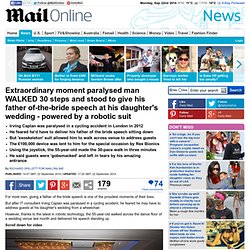 But after IT consultant Irving Caplan was paralysed in a cycling accident, he feared he may have to address guests at his daughter's wedding from a wheelchair. Is your Facebook habit putting you at risk of fraud? Students were asked to participate in an online survey about technology useThis included how often they used Facebook, and concerns about privacyEach student was sent a fake friend request, followed by a phishing messageMajority of Facebook users were willing to accept the fake friend requestsBut only the most habitual users fell victim to the phishing message By Victoria Woollaston for MailOnline Published: 14:15 GMT, 16 September 2014 | Updated: 14:37 GMT, 16 September 2014 If you regularly check your Facebook account, respond to messages and like posts you could be an easy target for cybercriminals. 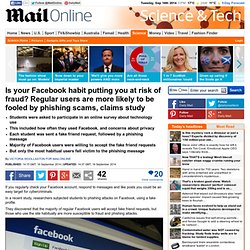 In a recent study, researchers subjected students to phishing attacks on Facebook, using a fake profile. They discovered that the majority of regular Facebook users will accept fake friend requests, but those who use the site habitually are more susceptible to fraud and phishing attacks. The research was carried out by Dr. But, only the most habitual users fell victim to the phishing attack. Barclaycard trials wearable contactless wristband 'wallet' in London. Barclaycard is trialling contactless payment wristbands in LondonCalled bPay the band lets anyone of any bank make payments without cardsIf the trial is successful the device will be rolled out nation-wide next yearThe bands are pre-loaded with money and can be automatically topped upThey can be used for purchases of up to £20 ($32) for a single item By Sean Poulter for the Daily Mail Published: 14:51 GMT, 16 September 2014 | Updated: 18:20 GMT, 16 September 2014 The wallet and purse have become redundant with the launch of a rubber wristband that can be used to pay for a bus journey or buy a coffee.

The bPay band has been developed by Barclaycard although it can be used by anyone, regardless of who they bank with. Self-driving cars now need a permit in California. Agency issued testing permits that allowed three companies to dispatch 29 vehicles onto freeways and into neighborhoodsGoogle has fitted a temporary wheel to its driverless car concept to allow it to take to the roadsPlans to test cars around Nasa's Ames research base By Associated Press and Mark Prigg for MailOnline Published: 16:21 GMT, 16 September 2014 | Updated: 18:52 GMT, 16 September 2014 Computer-driven cars have been testing their skills on California roads for more than four years — but until now, the Department of Motor Vehicles wasn't sure just how many were rolling around.

The #addcym Daily. Cdn.nmc.org/media/2014-nmc-horizon-report-k12-EN.pdf. Dell Venue 8 7480 is world's THINNEST tablet. Earlier this week, while Apple was busy revealing its new iPhone and Apple Watch, Dell quietly released a new tablet in San FranciscoThe Dell Venue 8 7840 is 6mm thick making it the world's thinnest tabletIt also comes with four cameras, three of which can take '3D images'A price has not yet been announced but it will be released later this yearThe device's 8.4-inch screen also sports a resolution of 2560 x 1600.

Generation HELPLESS: Children are now better at using smartphones than swimming, tying their shoelaces and even telling the time. Google employees lived at work rent-free thanks to their awesome perks. In an online thread, several former Googlers told of how they lived in parked cars and campers on campus to save money on rent Two ex-employees wrote that they lived on campus for more than a year, and were never once told to leave Google offers employees three free meals a day, as well as other amenities like workout facilities and nap areas. 'Undetectable' Peter Pan malware hits thousands. Hackers have created an email invoice asking for £145 to pay for ticketsInvoice is for performance of Peter Pan at Bournemouth Pavilion theatreWhen the attachment is opened, it installs a virus onto the computerVirus is capable of stealing information such as passwords and namesIt can spread itself to other machines also using same internet connectionIt may be targeting small and medium businesses throughout the UK.

Amazon's 3D Fire mobile comes to UK on 30 September. Fire is launching on O2 Refresh for £33 a month, with no upfront costs Customers buyers will also receive a year's Amazon Prime membershipThis membership includes Prime Instant Video and one-day shippingThe phone comes with Dynamic Perspective, which uses cameras built into the front of the device to track head movement and create a 3D effectIt has 13MP camera, runs Android 4.4 KitKat, and Mayday support. Gmail passwords leaked with 5 million account details exposed on Russian website. Hackers exposed nearly 5 million Gmail account details and passwords on Bitcoin Security – a popular Russian website devoted to cryptocurrencyThe leak became known after a user posted a link to the log-in credentials on Reddit frequented by hackers, professional and aspiringThe account holders are mostly English, Russian, and Spanish and 60 percent of accounts were activeA Google spokesman said many of the passwords in question were likely taken from a website other than Google.

Moto 360 smartwatch is now available in the US and is coming to the UK in October.