Schooner a vessel for Toronto underground history. What High Park used to look like in Toronto. Just shy of 400 acres, High Park is among Toronto's largest downtown green spaces. 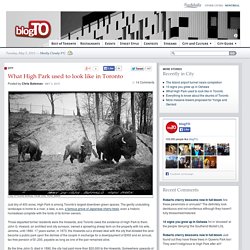 The gently undulating landscape is home to a river, a lake, a zoo, a famous grove of Japanese cherry trees, even a historic homestead complete with the tomb of its former owners. Those departed former residents were the Howards, and Toronto owes the existence of High Park to them. John G. PS1 Pluralistic School - PS1. Get in early: sell your teaching materials to millions. We have a great, early opportunity for teachers who are interested in selling their high-quality, original teaching materials on the new TES Resources. 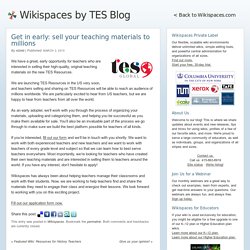 We are launching TES Resources in the US very soon, and teachers selling and sharing on TES Resources will be able to reach an audience of millions worldwide. Early registration to sell your teaching materials on TES Resources. Secrets of a Travel Writer. By George W. 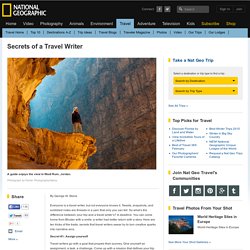 Stone Everyone is a travel writer, but not everyone knows it. Canadian First Nations Seek to Protect Forest Homeland. He didn't mention his name, only that he was 62 years old and belonged to the Poplar River First Nation, indigenous people who live on the east shore of Lake Winnipeg, in Manitoba. 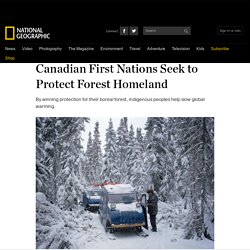 Writing Workshops for Children and Teens in Victoria BC. TeachCycle: Teach Measure Learn. Join Us. Opportunities at BetterLesson, INC in Cambridge, MA Interested in joining the BetterLesson team? 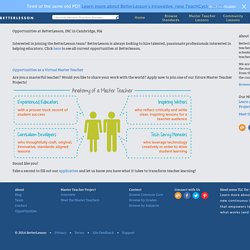 BetterLesson is always looking to hire talented, passionate professionals interested in helping educators. Toronto’s first Jewish nurse writes of early Toronto. Memoirs of Dorothy Goldstick Dworkin In the following article, the former Dorothy Goldstick relates her experiences working as a nurse and midwife in Toronto’s fledging Jewish community from 1907 to 1911, when thousands of Jewish immigrants from Eastern Europe and the Russian Pale were arriving in the city each year. 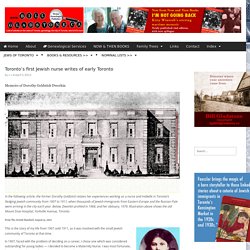 Below, Dworkin profiled in 1968; and her obituary, 1976. Illustration above shows the old Mount Sinai Hospital, Yorkville Avenue, Toronto. From The Jewish Standard, August 15, 1960. Digital Bytes. Snapwire - Authentic custom photos created just for you. CIVIX. CIVIX is a national, charitable organization and its mission is to grow young Canadians into engaged, committed and active citizens. 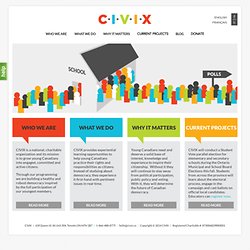 Through our programming we are building a healthy and robust democracy inspired by the full participation of our youngest members. CIVIX provides experiential learning opportunities to help young Canadians practice their rights and responsibilities as citizens. Instead of studying about democracy, they experience it first-hand with pertinent issues in real-time. Young Canadians need and deserve a solid base of interest, knowledge and experience to inspire their citizenship. Without it they will continue to stay away from political participation, public policy and voting. CIVIX will conduct a Student Vote parallel election for elementary and secondary schools during the Ontario Municipal and School Board Elections this fall. Americans Think We Have the World’s Best Colleges. We Don’t.

Americans have a split vision of education. 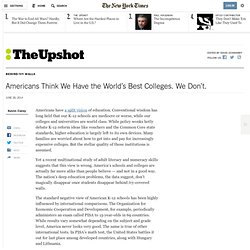 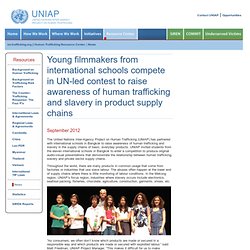 UNIAP invited students from the eleven international schools in Bangkok to enter a competition to produce original audio-visual presentations that demonstrate the relationship between human trafficking, slavery and private sector supply chains. Mass Flourishing. The Empress of Ireland: Remembering ‘Canada’s Titanic’ What's the Future Ever Done for Me? Teach For Canada. Doesn't Canada have a strong education system? 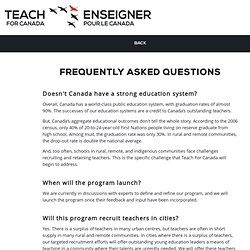 Overall, Canada has a world-class public education system, with graduation rates of almost 90%. The successes of our education systems are a credit to Canada’s outstanding teachers. But, Canada’s aggregate educational outcomes don't tell the whole story. According to the 2006 census, only 40% of 20-to-24-year-old First Nations people living on reserve graduate from high school.

Among Inuit, the graduation rate was only 30%. And, too often, schools in rural, remote, and indigenous communities face challenges recruiting and retaining teachers. When will the program launch? We are currently in discussions with experts to define and refine our program, and we will launch the program once their feedback and input have been incorporated.

Will this program recruit teachers in cities? The Shaw Fire Log: The mysterious hand has been stoking the fire since 1986. It’s a holiday tradition watched by more than three million people. It has its own Twitter account. It’s been featured on the Daily Show with Jon Stewart in a skit with Steve Carell. And the mysterious hand that stokes the fire has even had letters from women asking if he is single. Welcome to the Internet of Thingies: 61.5% of Web Traffic Is Not Human - Alexis C. Madrigal. It happened last year for the first time: bot traffic eclipsed human traffic, according to the bot-trackers at Incapsula. This year, Incapsula says 61.5 percent of traffic on the web is non-human. Now, you might think this portends the arrival of "The Internet of Things"—that ever-promised network that will connect your fridge and car to your smartphone.

But it does not. This non-human traffic is search bots, scrapers, hacking tools, and other human impersonators, little pieces of code skittering across the web. Home - America Y'all. In Flanders Fields published with N.S. nurse's help - Nova Scotia. The now iconic Remembrance Day poem In Flanders Fields may never have been published if a Nova Scotia nurse had followed army regulations. Clare Gass went to the battlefields of France during the First World War and served with her colleague and friend Lt. Col. John McCrae — author of In Flanders Fields. Canada's greatest Second World War air ace also hailed as hero in Israel.

Boxer defending title in Africville. Remembering the Christie Pits riot: DiManno. A Square Grows at Yonge and Dundas. Historicist: What To Do With the Don Jail? Welcome to Internment Camp B70, a little known piece of New Brunswick's history. Man says he was arrested after he asked officers for ID. Online Teachers Wanted. Canada & The United States: Bizarre Borders Part 2. Chimo: Canada's Attempt at a New National Greeting. The long-standing friendly rivalry between Canada and the U.S. began when the real fighting stopped after the War of 1812.

10 of the Best Jobs for the Future. Historicist: The Canada Spelling Book.