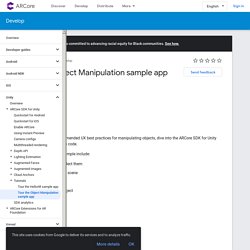 The operations covered in the sample include: Manipulating objects to select themMoving objects around the sceneRotating objectsChanging the size of an objectElevating an object As you explore this sample, install and run the ARCore Elements demo app on your Android phone. This app is designed for AR developers and designers to showcase UX principles and design patterns. It covers these topics featured visually as four islands: User environmentUser interfaceUser movementObject manipulation. Untitled. A while back I discovered that the awesome Augment company included animations in their models. 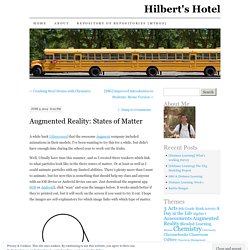 I’ve been wanting to try this for a while, but didn’t have enough time during the school year to work out the kinks. Well, I finally have time this summer, and so I created three trackers which link to what particles look like in the three states of matter. Or at least as well as I could animate particles with my limited abilities. There’s plenty more than I want to animate, but for now this is something that should help my class and anyone with an iOS device or Android device can use. Just download the augment app (iOS or Android), click “scan” and scan the images below. Here are some videos of the 3D objects. A Quick Guide to Designing for Augmented Reality on Mobile (Part 2) The following are a collection of some basic interface patterns and behaviors that have started to emerge and worth considering when designing an AR experience. 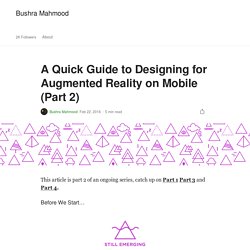 For the sake of starting with the absolute basics, this will not cover object or facial recognition. How an object gets introduced into space can set the pace for the rest of the experience. ​​ Should your content automatically place itself in the environment? Or should the user place the content manually? A) Automatically insert content (e.g., candle appears on top of a table when the app launches). Virtual Reality (VR) – Augmented Reality (AR) – Mixed Reality (MR) – A Quick Understanding – Abhijit's Blog. Continuing my series of posts on Holographic App Development Using Microsoft HoloLens, here is one more addition to the series. 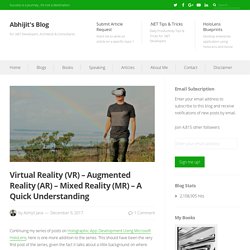 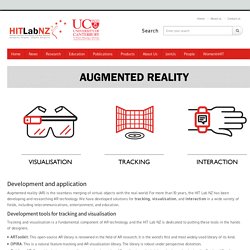 For more than 10 years, the HIT Lab NZ has been developing and researching AR technology. We have developed solutions for tracking, visualisation, and interaction in a wide variety of fields, including telecommunications, entertainment, and education. Every (Major) AR Development Platform and Why It’s Important. MIT Smarter Objects Augmented Reality User Interface. The AR Design Cheat Sheet - Prototypr. How do users interact with the virtual content? 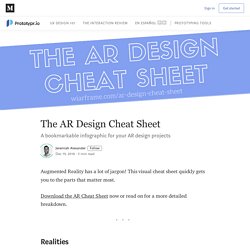 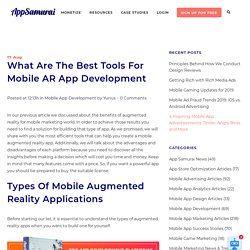 In order to achieve those results you need to find a solution for building that type of app. As we promised, we will share with you the most efficient tools that can help you create a mobile augmented reality app. Additionally, we will talk about the advantages and disadvantages of each platform because you need to discover all the insights before making a decision which will cost you time and money. Keep in mind that many features come with a price. (11) Touch table driven augmented reality. The ultimate VR, AR and MR guide - virtual reality, augmented reality and mixed reality explained. VR encompasses all virtually immersive experiences. 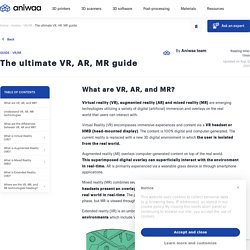 These could be created using real-world content (360° video), digital content (computer-generated), or a hybrid of both. This medium requires the use of a VR headset or head-mounted display (HMD). Categories of VR headsets A number of key manufacturers, startups, and crowdfunded products have emerged to produce a range of VR products. Tipos de RA. 4 Main Types of Augmented Reality Applications You can Build. Augmented reality is the deploying of interactive digital elements over the surrounding real-world objects. 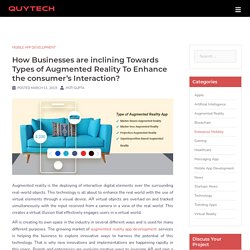 This technology is all about to enhance the real world with the use of virtual elements through a visual device. AR virtual objects are overlaid on and tracked simultaneously with the input received from a camera in a view of the real world. This creates a virtual illusion that effectively engages users in a virtual world. AR is creating its own space in the industry in several different ways and is used for many different purposes. Create an Augmented Reality (AR) App (Free Hands-on Workshop) Torch AR Wayfinding Prototype. Dutch Rose Media, Augmented Reality Design. First, there’s the technology. 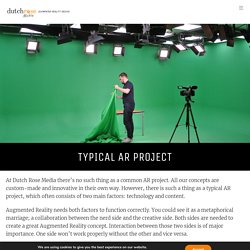 First, the technology needs a so-called trigger. Week 1 Assignment. Lecturette: WEEK 1 LECTURETTE.pdf Objective: To develop and understanding of what augmented reality is, where it came from, and best ways to use it in education. In this assignment, groups will investigate augmented reality. The group will work together to answer the following questions: What exactly is augmented reality? The group will use their discussion area to work together to answer these questions fully. An excellent resource to get started is EducationAR wiki. Unity Unveils Project MARS for Simplified AR Development & Facial AR for Easy Mocap. On Tuesday, at the Unite Berlin developers conference, Unity unveiled new tools designed specifically for augmented reality that could literally raise the technology to the next level. Coming this fall, a new extension for Unity called Project MARS (short for Mixed and Augmented Reality Studio) will enable developers to create robust AR apps "that live in and react to the real world," according to Timoni West, director of XR research at Unity Labs.

"Our motto for this project: Reality is our build target. In other words, we don't want you to just think about building to a device or building to a console," said West during the AR portion of the event's keynote presentation. "We want you to think about how you can make apps that actually live in the real world. Build Location Based Augmented Reality Apps with Mapbox. Build your own Augmented Reality Pokemon-Go Clone! Create a GPS-based Pokemon GO Clone (with Mapbox)We will use the ARInterface that combines ARKit and ARCore in one Scene All Apps are running on IOS & on Android Learning by Doing, we will code all from scratch Why should you learn Augmented Reality & Mapbox? Mapbox handels the mapping, so you’re free to focus on designing, building, and developing your application.Augmented Reality is in it's early stages. There is still much potential to create awesome Applications.