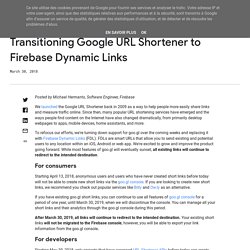 Since then, many popular URL shortening services have emerged and the ways people find content on the Internet have also changed dramatically, from primarily desktop webpages to apps, mobile devices, home assistants, and more. To refocus our efforts, we're turning down support for goo.gl over the coming weeks and replacing it with Firebase Dynamic Links (FDL). FDLs are smart URLs that allow you to send existing and potential users to any location within an iOS, Android or web app. We're excited to grow and improve the product going forward. For consumers Starting April 13, 2018, anonymous users and users who have never created short links before today will not be able to create new short links via the goo.gl console. After March 30, 2019, all links will continue to redirect to the intended destination. Francesca Woodman. Front of dust jacket of 2011 book Francesca Woodman; photograph is detail from "Polka Dots" §Life (history)[edit] Francesca Woodman was born on April 3, 1958, in Boulder, Colorado, to artists George Woodman and Betty Woodman (Abrahams).[3][6] Her older brother Charles later became an associate professor of electronic art.[7] Her mother is Jewish and her father is from a Protestant background.[8] Woodman attended public school in Boulder, Colorado, between 1963 and 1971 except for second grade, which she attended in Italy. 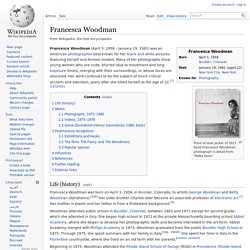 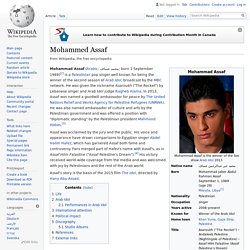 He was given the nickname Asaroukh ("The Rocket") by Lebanese singer and Arab Idol judge Ragheb Alama. In 2013, Assaf was named a goodwill ambassador for peace by The United Nations Relief and Works Agency for Palestine Refugees (UNRWA). He was also named ambassador of culture and arts by the Palestinian government and was offered a position with "diplomatic standing" by the Palestinian president Mahmood Abbas.[3] Assaf was acclaimed by the jury and the public.

His voice and appearance have drawn comparisons to Egyptian singer Abdel Halim Hafez, which has garnered Assaf both fame and controversy. Pegning til www.heltgravid.dk. THE JETSET DIARIES. Military History Visualized. Israeli humor - Hope kindergarten. We make stuff that matters.

Hyperbole and a Half - Wikipedia. Hyperbole and a Half draws inspiration from "rage comics," promoting a certain similarity in their shared diction and simple, almost rudimentary art.[8] A number of Brosh's images have, in turn, been repurposed into various memes and rage comic panels.[1] A popular image, taken from an entry where Brosh describes her frustration over her inability to maintain enthusiasm for daily responsibilities, shows Brosh excitedly exclaiming "CLEAN ALL THE THINGS! 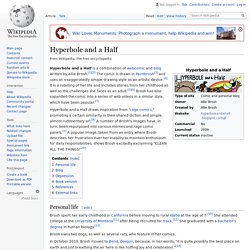 " Darwin Awards - Wikipedia. The project became more formalized with the creation of a website in 1993, and followed up by a series of books starting in 2000, authored by Wendy Northcutt. 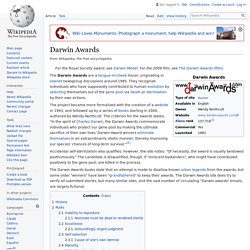 The criterion for the awards states, "In the spirit of Charles Darwin, the Darwin Awards commemorate individuals who protect our gene pool by making the ultimate sacrifice of their own lives. Darwin Award winners eliminate themselves in an extraordinarily idiotic manner, thereby improving our species' chances of long-term survival. "[2] SoundCloud. Everything You Know About Clausewitz Is Wrong. 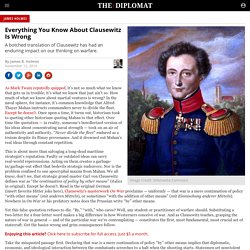 How much of what we know about martial ventures is wrong? In the naval sphere, for instance, it’s common knowledge that Alfred Thayer Mahan instructs commanders never to divide the fleet. Except he doesn’t. Once upon a time, it turns out, historians took to quoting other historians quoting Mahan to that effect.

Over time the quotation — in reality, someone’s bowdlerized version of his ideas about concentrating naval strength — took on an air of authenticity and authority. Six-Word Memoirs - Wikipedia. Six-Word Memoirs is a project founded by the U.S. 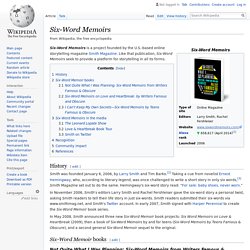 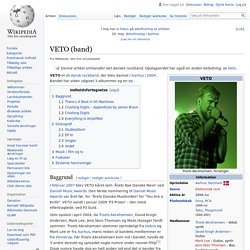 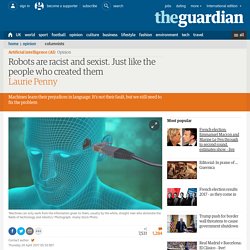 Recent reports have shown that machine-learning systems are picking up racist and sexist ideas embedded in the language patterns they are fed by human engineers. The idea that machines can be as bigoted as people is an uncomfortable one for anyone who still believes in the moral purity of the digital future, but there’s nothing new or complicated about it. “Machine learning” is a fancy way of saying “finding patterns in data”. Of course, as Lydia Nicholas, senior researcher at the innovation thinktank Nesta, explains, all this data “has to have been collected in the past, and since society changes, you can end up with patterns that reflect the past.

How bad breath could be a sign of a vitamin deficiency. Many of us suffer from bad breath, cracked lips and agonising headaches. 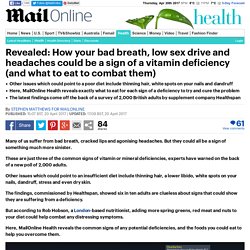 But they could all be a sign of something much more sinister. These are just three of the common signs of vitamin or mineral deficiencies, experts have warned on the back of a new poll of 2,000 adults. Other issues which could point to an insufficient diet include thinning hair, a lower libido, white spots on your nails, dandruff, stress and even dry skin. The findings, commissioned by Healthspan, showed six in ten adults are clueless about signs that could show they are suffering from a deficiency. WATCH: This Canadian funny girl is a comedy sensation in Israel. JTA — Renny Grinshpan is a Canadian Israeli with shaky Hebrew. Yet in the past several months, she has become famous in this country for her comedic commentary on Israeli culture. Millions watch her Facebook videos — and she is recognized on the street. Get The Times of Israel's Daily Edition by email and never miss our top stories Free Sign up! “Renny, can I get you something?” Nadine bdeir saudi arabia.

Forsøgsperson.dk. Serial (podcast) Serial is a podcast exploring a nonfiction story over multiple episodes. First released in October 2014, it is a spinoff of the radio program This American Life. Episodes vary in length and are available weekly. It ranked number one on iTunes even before its début and remained there for several weeks.[1] Serial won a Peabody Award, the first of its kind, in April 2015. Sarah Koenig hosts the series, which was co-created and is co-produced by Koenig and Julie Snyder, both producers of This American Life. Koenig has said that Serial is "about the basics: love and death and justice and truth. Combatants for Peace. Book Depository: Millions of books with free delivery worldwide. Mit forjættede land af Ari Shavit (Bog) - køb hos SAXO.com. Sig navnet Israel, og man tænker straks: uløselig konflikt med palæstinenserne, ulovlige bosættelser eller de ultraortodokses voksende politiske indflydelse.

Insaniquarium. Lemon Whores. Home page. College of Wizardry. Cicada 3301. Cicada 3301 is a nickname given to an organization that on six occasions has posted a set of puzzles and alternate reality games to possibly recruit codebreakers/linguists from the public.[1] The first internet puzzle started on January 4, 2012, and ran for approximately one month. A second round began one year later on January 4, 2013, and a third round following the confirmation of a fresh clue posted on Twitter on January 4, 2014.[2][3] The stated intent was to recruit "intelligent individuals" by presenting a series of puzzles which were to be solved. No new puzzles were published on January 4, 2015. However, a new clue was posted on Twitter on January 5, 2016.[4][5] In April 2017 a verified PGP-signed message was found: Beware false paths. Always verify PGP signature from 7A35090F.[6] That message explicitly denies the validity of any unsigned puzzle, as recently as April 2017.

Together we can put this memorial under the noses and inside the mailboxes of people in power. The Notepad is an act of protest and commemoration disguised as a stack of ordinary yellow legal pads. When the pages are magnified, each ruled line is revealed to be microprinted text enumerating the full names, dates, and locations of each Iraqi civilian death on record over the first three years of the Iraq War. In 2010, a printed edition of one hundred notepads was covertly distributed to US representatives and senators. SECRET: NOTHING TO SEE HERE – An EXHIBITION EXPLORING THE FUTURE OF SURVEILLANCE, ESPIONAGE AND PRIVACY.