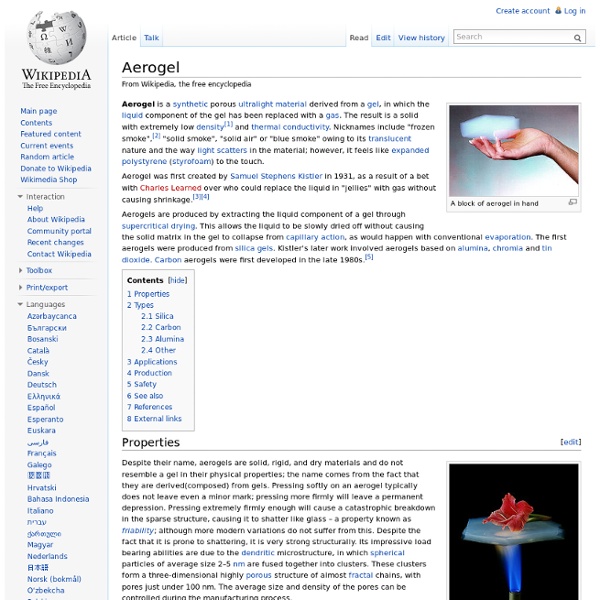 A block of aerogel in a person's hand Aerogel was first created by Samuel Stephens Kistler in 1931, as a result of a bet with Charles Learned over who could replace the liquid in "jellies" with gas without causing shrinkage.[3][4] IUPAC definition Gel comprised of a microporous solid in which the dispersed phase is a gas. Note 1: Microporous silica, microporous glass, and zeolites are common examples of aerogels. Note 2: Corrected from ref. [4], where the definition is a repetition of the incorrect definition of a gel followed by an inexplicit reference to the porosity of the structure. [6] Properties[edit] A flower is on a piece of aerogel which is suspended over a flame from a Bunsen burner. Aerogels are good thermal insulators because they almost nullify two of the three methods of heat transfer (convection, conduction, and radiation). Owing to its hygroscopic nature, aerogel feels dry and acts as a strong desiccant. Knudsen effect[edit] Materials[edit] Silica[edit] Carbon[edit] Alumina[edit]

Claytronics - Wikipedia Claytronics is an abstract future concept that combines nanoscale robotics and computer science to create individual nanometer-scale computers called claytronic atoms, or catoms, which can interact with each other to form tangible 3D objects that a user can interact with. This idea is more broadly referred to as programmable matter.[1] Claytronics has the potential to greatly affect many areas of daily life, such as telecommunication, human-computer interfaces, and entertainment. Current research[edit] In 2005, research efforts to develop a hardware concept were successful on the scale of millimeters, creating cylindrical prototypes 44 millimeters in diameter which interact with each other via electromagnetic attraction. Today, extensive research and experiments with claytronics are being conducted at Carnegie Mellon University in Pittsburgh, Pennsylvania by a team of researchers which consists of Professors Todd C.

Lordosis Lordosis is the normal inward lordotic curvature of the lumbar and cervical regions of the human spine.[1] The normal outward (convex) curvature in the thoracic and sacral regions is termed kyphosis or kyphotic. The term comes from the Greek lordōsis, from lordos ("bent backward").[2] Lumbar hyperlordosis is excessive extension of the lumbar region, and is commonly called hollow back or saddle back (after a similar condition that affects some horses). Lumbar kyphosis is an abnormally straight (or in severe cases flexed) lumbar region. These conditions are usually a result of poor posture and can often be reversed by learning correct posture and using appropriate exercises.[4] Types[edit]

WISP computer has no battery, gets power wirelessly from radio waves We’ve been hearing for years about all the ways the “internet of things” is supposed to revolutionize the world. When is that supposed to happen, though? Sure, you can get a few smart-things in your home, but the omnipresent network of sensors and remote systems we’ve been promised are still a fantasy largely because of the crummy state of battery technology. A team of researchers from the University of Washington’s Sensor Lab have come up with a way we might be able to get around that with a device called the WISP. It’s a tiny computer that doesn’t need a battery. The WISP (or Wireless Identification and Sensing Platform) sidesteps all the issues with finding wired power and adding bulky batteries to smart objects by harvesting power from radio waves.

What Is an Orthopedic Surgeon? - Orthopedic Surgery An orthopedic surgeon, or orthopaedic surgeon, is a surgeon who has been educated and trained in the diagnosis and preoperative, operative, and postoperative treatment of diseases and injuries of the musculoskeletal system. Orthopedic surgeons work closely with other health care providers and often serve as consultants to other physicians. Orthopedic surgeons often are involved in education (e.g., medical school professors) or research. They may practice in an orthopedic or multi-specialty group, or in a solo practice. Lab accident leads to discovery of battery that lasts 400 times longer Researchers at UC Irvine may have found a way to design a battery so it doesn’t lose its charge after years of use. The researchers discovered that by using a gold nanowire in electrolyte gel rather than lithium, the battery could withstand 200,000 charging cycles and only lose five percent of its capacity. Lithium batteries are subject to some corrosion after consistently being depleted and recharged. One of the researchers explained to Popular Science’s Dave Gershgorn the process was like pouring water between two cups, eventually some liquid is going to spill. Since smartphones have a lifespan of about two years until they’re traded-in, this problem rarely rears its ugly head.

The NASA data conspiracy theory and the cold sun « RealClimate When climate deniers are desperate because the measurements don’t fit their claims, some of them take the final straw: they try to deny and discredit the data. The years 2014 and 2015 reached new records in the global temperature, and 2016 has done so again. Some don’t like this because it doesn’t fit their political message, so they try to spread doubt about the observational records of global surface temperatures. A favorite target are the adjustments that occur as these observational records are gradually being vetted and improved by adding new data and eliminating artifacts that arise e.g. from changing measurement practices or the urban heat island effect. More about this is explained in this blog article by Victor Venema from Bonn University, a leading expert on homogenization of climate data. To illustrate the shenanigans of self-styled “climate skeptics”, take for example the following graph, which has been circulating for a while on climate denier websites.

science based - How to modify the human eye to see into the ultraviolet and infrared bands? There are a number of issues here. Resolution Ok, so let's say you create a new kind of cone that's sensitive to UV. Where are you going to put it? The retina is already jam-packed with cones, so you need to remove other cones to fit the new cones. Solvay Conference Photograph of the first conference in 1911 at the Hotel Metropole. Seated (L-R): W. Nernst, M. Brillouin, E. Solvay, H. Lorentz, E. Scientists create metallic foam that shatters bullets Engineers are developing new materials with the potential to offer unprecedented protection from bullets and crashes. Take a new composite metal foam, that absorbs most of the kinetic energy of bullets or other projectiles. Researchers with North Carolina State and the US Army Research, Development and Engineering Center have combined multiple bullet-stopping materials into a single piece of armor.

First transistors made entirely of nanocrystal 'inks' The transistor is the most fundamental building block of electronics, used to build circuits capable of amplifying electrical signals or switching them between the 0s and 1s at the heart of digital computation. Transistor fabrication is a highly complex process, however, requiring high-temperature, high-vacuum equipment. Now, University of Pennsylvania engineers have shown a new approach for making these devices: sequentially depositing their components in the form of liquid nanocrystal "inks." Their new study, published in Science, opens the door for electrical components to be built into flexible or wearable applications, as the lower-temperature process is compatible with a wide array of materials and can be applied to larger areas.