Development. Just Released: “Where Does Europe’s Money Go? A Guide to EU Budget Data Sources” The EU has committed to spending €959,988 billion between 2014 and 2020. 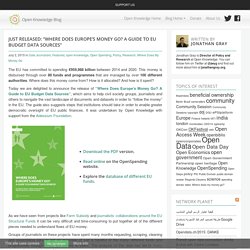 This money is disbursed through over 80 funds and programmes that are managed by over 100 different authorities. Where does this money come from? How is it allocated? And how is it spent? Today we are delighted to announce the release of “Where Does Europe’s Money Go? As we have seen from projects like Farm Subsidy and journalistic collaborations around the EU Structural Funds it can be very difficult and time-consuming to put together all of the different pieces needed to understand flows of EU money. Groups of journalists on these projects have spent many months requesting, scraping, cleaning and assembling data to get an overview of just a handful of the many different funds and programmes through which EU money is spent. Better data, documentation, advocacy and journalism around EU public money is vital to addressing the “democratic deficit” in EU fiscal policy. 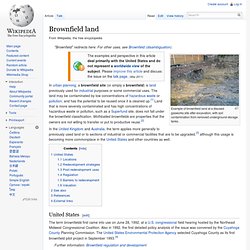 In urban planning, a brownfield site (or simply a brownfield) is land previously used for industrial purposes or some commercial uses. The land may be contaminated by low concentrations of hazardous waste or pollution, and has the potential to be reused once it is cleaned up.[1] Land that is more severely contaminated and has high concentrations of hazardous waste or pollution, such as a Superfund site, does not fall under the brownfield classification. Mothballed brownfields are properties that the owners are not willing to transfer or put to productive reuse.[2] In the United Kingdom and Australia, the term applies more generally to previously used land or to sections of industrial or commercial facilities that are to be upgraded,[3] although this usage is becoming more commonplace in the United States and other countries as well.

EU 'waste's millions on bizarre projects' One blog read: "We started really early today, Cristian slept in a bed in a house. 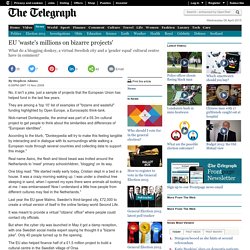 It was a crazy morning waking up. I was under a chestnut tree sleeping in sand, when I opened my eyes there were animals all looking at me. I was embarrassed! Now I understand a little how people from different cultures may feel in the Netherlands. " Last year the EU gave Malmo, Sweden's third-largest city, £72,000 to create a virtual version of itself in the online fantasy world Second Life. 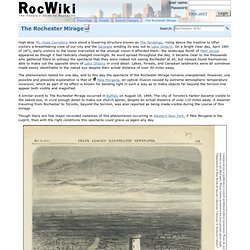 Hope Cemetery once stood a towering structure known as The Fandango, rising above the treeline to offer visitors a breathtaking view of our city and the Genesee winding its way out to Lake Ontario. On a bright clear day, April 16th of 1871, early visitors to the tower marvelled at the unusual vision it afforded them: the landscape North of Main Street appeared as though it had radically changed overnight. As word spread throughout the day, it became clear to the thousands who gathered there to witness the spectacle that they were indeed not seeing Rochester at all, but instead found themselves able to make out the opposite shore of Lake Ontario in vivid detail. Lakes, forests, and Canadian landmarks were all somehow made easily identifiable to the naked eye despite their actual distance of over 50 miles away.

The rise and rise of UKIP

Survivalism. Rainwater Collection. George Washington. 3D Printing. The Commissionors (The individuals) Curricula, scheme and reference. Other Sciences. Sustainable Agriculture. Become superhuman. Maths, Fun, Facts, Puzzles and Games. Home steading. DIY. Nth Norfolk Broadland - UK Independence Party. Home Phone Faults Help Telephone Line Test Help. Help Information Directory Free Warning: Be for you spend ages on the Phone To your Service Provider Check Your Own Service 1st Step 1 Firstly Find Your Master Telephone Socket (click~ HERE~ To See Picture of One) If You Do Not Have A Correct Master Socket You Will Not be Able To Test Your Telephone Line Step 2 Once Located Un-do The Two Screws And Gently Pull Out Your Extension Plate . 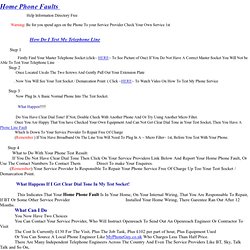 Step 3 Now Plug In A Basic Normal Phone Into The Test Socket. What Happen!!!!! Do You Have Clear Dial Tone! Once You Are Happy That You have Checked Your Own Equipment And Can Not Get Clear Dial Tone in Your Test Socket, Then You Have A Phone Line Fault Which Is Down To Your Service Provider To Repair Free Of Charge (Remember ) If You Have Broadband On The Line You Will Need To Plug In A ~ Micro Filter~ 1st, Before You Test With Your Phone. Welcome to your account! List of online databases. Online Search Tools - Deep Web Search.