Photos from Terry Murray's post in Old farm and country Photographs. Structures of the Great Plane Indians. Structure 3-4 By Maya, Audrey, Shira, and Liana Our topic is about plains Indians structures and what kinds of homes they lived in, how they made them, what they made them out of, and the types of designs were on the homes. 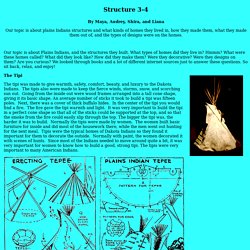 Our topic is about Plains Indians, and the structures they built. What types of homes did they live in? Hmmm? The Tipi The tipi was made to give warmth, safety, comfort, beauty, and luxury to the Dakota Indians. Designs of the Tipi There were many symbols used to decorate American Indian homes. Other basic facts of the Tipi The Plains Indians often lived in tipis because they can be moved easily and set up quickly. Wigwams Wigwams are oval shaped structures designed for living in.

Works Cited American Indian Literature and Cultures. 17 Oct. 2007 < English558/tipi.jpg>. Tipi. Dakota-Sioux: Tipi (or Tepee) - ti to house, pi to use to The tipi is a beautiful shaped living room, like a cathedral does it rise in the center, the round circle-like floor shape, a sacred space by itself. 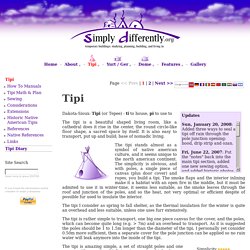 Telli.com: Sioux Tipi. Long ago, the only dwelling that broke the endless horizon of the Great Plains was the tipi. 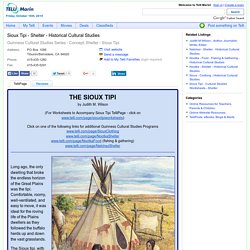 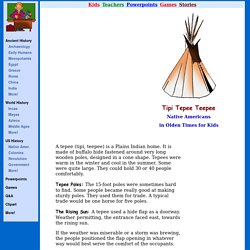 It is made of buffalo hide fastened around very long wooden poles, designed in a cone shape. Tepees were warm in the winter and cool in the summer. Some were quite large. They could hold 30 or 40 people comfortably. Tepee Poles: The 15-foot poles were sometimes hard to find. The Rising Sun: A tepee used a hide flap as a doorway. How to Build a Sami Hut in Wood!: 10 Steps (with Pictures) The last but very important thing to do is to cover the hut with some protection against weather and rain.I choosed to cover the hut with tarpaper because its easy and cheap, or you can paint the hut directly with tar if you want, but it is a messy project to do that....You can see that i have nailed some ribbons over the tarpaper that this summer will be used to mount some (i have not decided what type yet) outer panel on. 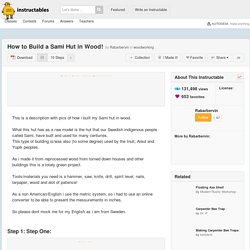 That ugly monster you see in the last pic is an experiment to see if the arrangement could store some heat for the night (you make the fire around it), it works, but i will later on test an idea that makes use of self circulating water from an accumulator tank and radiators under the lavas (where you sit and sleep) . Finnished! You are now the proud owner of a unique Sami hut that you can use as a guesthouse or maybe a cool looking sauna.....

PS. If you dont want to turn yourself into a smoke-dried fish, you MUST USE WELL DRIED and WELL SPLITTED wood. Tipis. What are they? 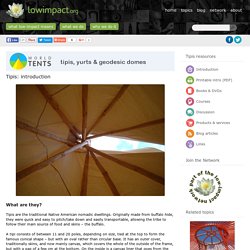 Tipis are the traditional Native American nomadic dwellings. Originally made from buffalo hide, they were quick and easy to pitch/take down and easily transportable, allowing the tribe to follow their main source of food and skins – the buffalo. A tipi consists of between 11 and 20 poles, depending on size, tied at the top to form the famous conical shape – but with an oval rather than circular base. It has an outer cover, traditionally skins, and now mainly canvas, which covers the whole of the outside of the frame, but with a gap of a few cm at the bottom. On the inside is a canvas liner that goes from the ground to about 2m up the inside walls. Structures of the Great Plane Indians. TIPIS - World Tents.