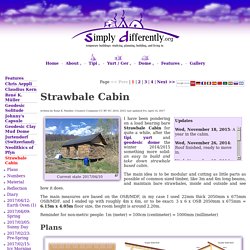 Mueller, Creative Commons CC BY NC 2014, 2015, last updated Fri, April 14, 2017 I have been pondering on a load bearing bare Strawbale Cabin for quite a while, after the tipi, yurt and geodesic dome the winter 2014/2015 something more solid: an easy to build and take down strawbale based cabin. The main idea is to be modular and cutting as little parts as possible of common sized timber, like 3m and 4m long beams, and maintain bare strawbales, inside and outside and see how it does.

3rd day. I am very grateful we are such a numerous group, there are a lot of tedious tasks that get done in one day. 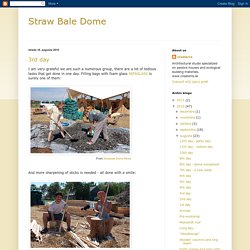 Filling bags with foam glass REFAGLASS is surely one of them: And more sharpening of sticks is needed - all done with a smile: The wood is protected with diluted linseed oil: Of course the main task was to finish the first vaults. Strawbale House Architecture — Strawbale House Architecture. How to Build a Straw Bale House. By Twilight Greenaway on April 3, 2013 Photographs by Florian van Roekel Photographer Florian van Roekel and his girlfriend, artist Amber Isabel, wanted an escape from pollution and city life but they didn’t just want any old weekend house. 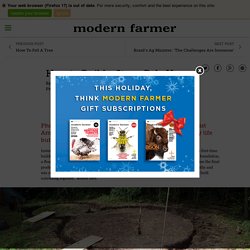 Instead, the Amsterdam-based pair envisioned a home with a minimal ecological footprint. Oryzatech: Strawbale Lego Blocks for Grown-ups. Strawbale Building is one of those endeavours that mostly flies below the radar. 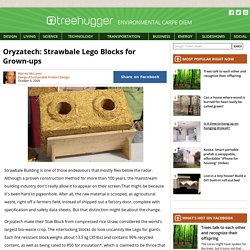 Although a proven construction method for more than 100 years, the mainstream building industry don't really allow it to appear on their screen.That might be because it's been hard to pigeonhole. After all, the raw material is scooped, as agricultural waste, right off a farmers field, instead of shipped out a factory door, complete with specification and safety data sheets.

But that distinction might be about the change. Oryzatech make their Stak Block from compressed rice straw, considered the world's largest bio-waste crop. The interlocking blocks do look uncannily like Lego for giants. Testing at California Polytechnic University found that Stak Blocks were not only highly insulative but also seismically strong: "better than wood framing and less brittle than concrete walls," is how Oryzatech put it. 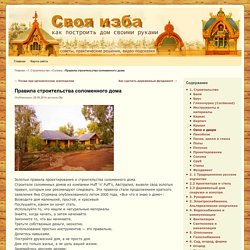 Eco Cocon English. Straw Bale and Tiny Homes. Guest Post by Andrew Morrison As you may know, my wife, 12 year old daughter, and I recently sold more than half of our worldly belongings to fund our adventure, let go of our large rental house, and spent the next 6 months in a quest to reconnect with each other and with what really matters in life. 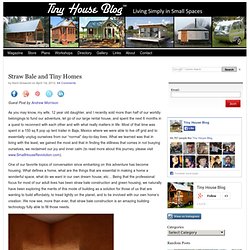 Most of that time was spent in a 150 sq ft pop up tent trailer in Baja, Mexico where we were able to live off grid and to essentially unplug ourselves from our “normal” day-to-day lives. What we learned was that in living with the least, we gained the most and that in finding the stillness that comes in not busying ourselves, we reclaimed our joy and inner calm (to read more about this journey, please visit www.SmallHouseRevolution.com). One of our favorite topics of conversation since embarking on this adventure has become housing. Less dependence on a paycheck. I don’t believe that downsizing means that we have to give up our connection to beautiful, efficient, and even spacious living. 15 Months of Misadventures - Our Strawbale House. How to build a Straw Bale house. How to build a Straw Bale house. Straw- bale building online course. Build a shed from straw bales.

Riverstone Studios Straw Light Clay Building How To. Tom Rijven - Lecture on Straw Bale House. The Pros and Cons of Straw Bale Wall Construction. Following are some pros and cons of building a straw bale house. 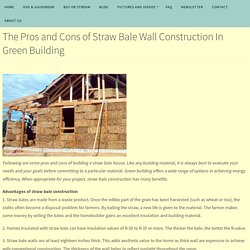 Like any building material, it is always best to evaluate your needs and your goals before committing to a particular material. Green building offers a wide range of options in achieving energy efficiency. Load-bearing Strawbale. Straw-bale building. What is it? 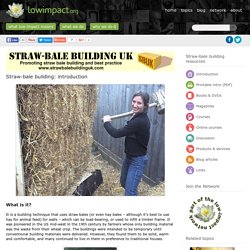 It is a building technique that uses straw bales (or even hay bales – although it’s best to use hay for animal feed) for walls – which can be load-bearing, or used to infill a timber frame. It was pioneered in the US mid-west in the 19th century by farmers whose only building material was the waste from their wheat crop. The buildings were intended to be temporary until conventional building materials were delivered. However, they found them to be solid, warm and comfortable, and many continued to live in them in preference to traditional houses.

Builders. Examples. Guids. Plans. Plastering. Prefab. Resources. Workshops. Strawbale Buildings. LEPIANKA. LEPIANKA. MASSEY BURKE - RETREAT VILLAGE, MENDOCINO. To Infill or Not to Infill...that is the question. To Infill or Not to Infill… ...that is the question by Sigi Koko Strawbale walls can be constructed in two basic ways: loadbearing or infill. 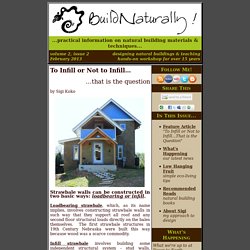 Loadbearing strawbale, which, as its name implies, involves constructing strawbale walls in such way that they support all roof and any second floor structural loads directly on the bales themselves. The first strawbale structures in 19th Century Nebraska were built this way because wood was a scarce commodity. Newsflash! Strawbale MEETS Current U.S. Building Codes. Newsflash! 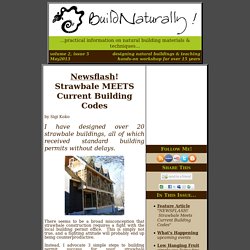 Strawbale MEETS Current Building Codes by Sigi Koko I have designed over 20 strawbale buildings, all of which received standard building permits without delays. There seems to be a broad misconception that strawbale construction requires a fight with the local building permit office. Down to Earth Design - online articles on natural building & sustainable design. Straw has been used in various ways as a construction material for as long as there has been agriculture. Early structures implement straw-clay combinations.

The straw provided tensile strength and some insulation value, and gave clay building materials additional structural integrity. Europeans used straw lightly coated with clay slip to infill heavy timber construction. Many examples of both of these techniques survive today. Baled straw was first used in construction over 100 years ago by the settlers of Nebraska. 978-3-89958-422-6.volltext.frei.pdf. Insulated Bamboo Or Stick Interior Walls. This Instructable describes an innovative way to build walls using bamboo or wood saplings and bags of insulation. We’ll be using bamboo for this Instructable since it is rapidly renewable, low cost and readily available in many parts of the world. Let’s start with some background information to better understand what is involved. People often wonder how to build interior walls on earthbag and strawbale homes, which are about 18” wide once plastered.

A straw bale building will last a very long time when designed appropriately and built well. You can read much more about the advantages of straw bale building by clicking through to this website www.homegrownhome.co.uk Hemp is grown here in East Yorkshire by the Voase family (www.kjvoaseandson.co.uk). We successfully use their hemp fibres in many of our lime and clay plasters and we cast their hemp shiv mixed with lime to form walls or to fill awkward spaces. The Ultimate Survivor / Prepper Paradise On The Market. This is the ultimate survivor/prepper/homesteader paradise. Private and secluded, 29 Acres of beautiful wooded Ozark type land, and not seen from the dead end gravel road, is a 26 ft. round, 2 story, 3 bedroom 1 bath strawbale house, with live roof; built in 2008.