Someone Used Neural Networks To Upscale An 1895 Film To 4K 60 FPS, And The Result Is Really Quite Astounding - Digg. Elon Musk’s Neuralink looks to begin outfitting human brains with faster input and output starting next year. Neuralink, the Elon Musk-led startup that the multi-entrepreneur founded in 2017, is working on technology that’s based around “threads,” which it says can be implanted in human brains with much less potential impact to the surrounding brain tissue versus what’s currently used for today’s brain-computer interfaces. 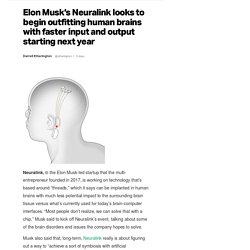 “Most people don’t realize, we can solve that with a chip,” Musk said to kick off Neuralink’s event, talking about some of the brain disorders and issues the company hopes to solve. Musk also said that, long-term, Neuralink really is about figuring out a way to “achieve a sort of symbiosis with artificial intelligence.” He went on to say, “This is not a mandatory thing. This is something you can choose to have if you want.” All of this sounds incredibly far-fetched, and to some extent it still is: Neuralink’s scientists told The New York Times in a briefing on Monday that the company has a “long way to go” before it can get anywhere near offering a commercial service.

The Trillion Internet Observations Showing How Global Sleep Patterns Are Changing. In 1995, some 40 million people all over the world were connected to the Internet. 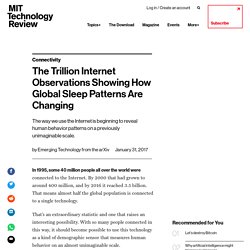 By 2000 that had grown to around 400 million, and by 2016 it reached 3.5 billion. That means almost half the global population is connected to a single technology. That’s an extraordinary statistic and one that raises an interesting possibility. With so many people connected in this way, it should become possible to use this technology as a kind of demographic sensor that measures human behavior on an almost unimaginable scale. Today, Klaus Ackermann at the University of Chicago and a couple of pals say they have done just this by studying how devices connected to, and disconnected from, the Internet between 2006 and 2013. So what does this enormous data set reveal about humanity?

Ackermann and co built their data set by combining information from two sources. The researchers start out by studying how Internet connectivity grows and eventually becomes saturated in societies all over the world. Want to code? You better start teaching yourself. Using lidar and a healthy dose of AI, a new robot can check that building projects are going to plan. 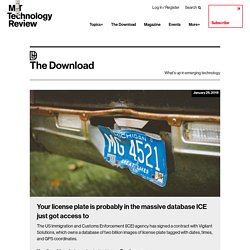 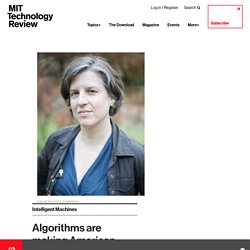 The phrase is usually used to point out how the rich have more access to technology, but what happens when the poor are disproportionately subject to it? In Automating Inequality, author Virginia Eubanks argues that the poor are the testing ground for new technology that increases inequality. Zeynep Tufekci: We're building a dystopia just to make people click on ads. Cities in the Circular Economy The Role of Digital Tech. Robot Art Raises Questions about Human Creativity. In July 2013, an up-and-coming artist had an exhibition at the Galerie Oberkampf in Paris. 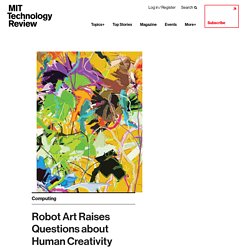 It lasted for a week, was attended by the public, received press coverage, and featured works produced over a number of years, including some created on the spot in the gallery. Altogether, it was a fairly typical art-world event. The only unusual feature was that the artist in question was a computer program known as “The Painting Fool.” Even that was not such a novelty. Art made with the aid of artificial intelligence has been with us for a surprisingly long time.

The unresolved questions about machine art are, first, what its potential is and, second, whether—irrespective of the quality of the work produced—it can truly be described as “creative” or “imaginative.” Thus far, the Painting Fool—described as “an aspiring painter” on its website—has made progress on all three fronts.