Index page - Minecraft Forums. Planet Minecraft : Texture Packs, Skins, Projects, Servers & Blogs! Minecraft Wiki/he. AdventureCraft. Note AdventureCraft is compatible with 1.3.2 via its installer but it only has features from beta 1.7.3 and back. 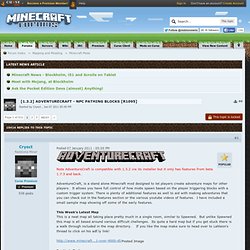 AdventureCraft, is a stand alone Minecraft mod designed to let players create adventure maps for other players. It allows you have full control of how mobs spawn based on the player triggering blocks with a custom trigger system. There is plenty of additional features as well to aid with making adventures that you can check out in the features section or the various youtube videos of features. I have included a small sample map showing off some of the early features. This Week's Latest Map This is a neat map all taking place pretty much in a single room, similar to Spawned. Fan Made Trailer Sample Map Trailer Recent Feature Videos Feature List Tutorial Videos Recent Version History r1095 - Adds a NPC Path block that can have an NPC path to it. [Adv] Four Towers Adventure Dungeon Map. Welcome to Master of the Arena!

This is an action packed fully automated, mob spawning, ground pounding, lava flowing, round counting experience. In order to defeat this map you will need to keep moving and of course kill gobs of mobs as the doors open and close with a full array of monsters. To become the Master of the Arena you must survive all 9 rounds without dying. Unique dispensing means you will never play the same game twice (Items and mobs). This map will work for SSP or SMP although I am making one specifically for SMP that will be more dificult for multiple players. Download: Master of the Arena (single player) or Master of the Arena MP (Multi player) How to play: Enter the control room. Video by timbloemen. Minecraft FiniteLiquid v2. 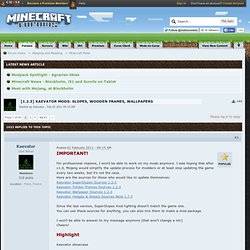 Highlight Kaevator showcase. Minecraft Wiki/he. USS Enterprise Refit [UPDATED FEB3 + YOGSCAST!] 58oP0WJn3BM Download I originally built this ship on a SMP server and finished it about a month ago. 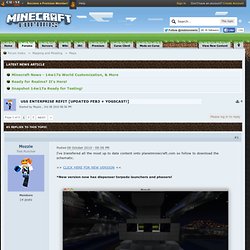 I've been sitting on it for awhile and I've finally put it all together as a playable single player level. This is my second attempt after a server map reset so it's the "NCC-1701-A" registration. (Also The Undiscovered Country was be best movie) It has a full interior, a wide compliment of tools and resources throughout the ship. Included in the download is the World folder, a set of Star Trek player skins, a .schematic file and a very basic "sci-fi" texture pack, you'll have to merge it with whatever custom pack you are using. 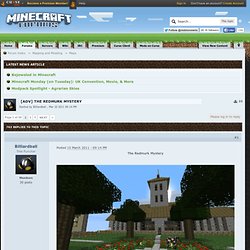 If you spot anything; please let me know. Setting: You have arrived at the remote port town of Redmurk, surprisingly there appears to be no one around and further exploration reveals the town to be empty. A look around the nearby homes shows signs of struggle yet there are no signs of battle or disaster. Perhaps you should investigate? This is my first crack at an adventure map, so any criticism is appreciated. You can download it here Please post any feedback as well as your final score after completion.

Installation: Unzip the files and place the Redmurk folder into \.minecraft\saves. AdventureCraft. [Surv] ★★★ Survival Island ★★★ 308,000+ DL's ★★★ Crismajor said: How did you create the map? 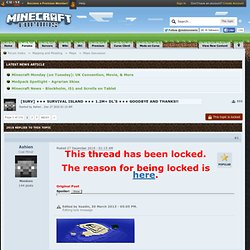 I assume he used a program like mcEDIT (iff so props brah, that sucker is hard to use) any way day three and here is my survival house its not pretty but it works (especially since i have found no hositle mobs and i set it to hard.) i have a small farm plot and a lone plane i named bob :3 isn't bob cute? Minecraft FiniteLiquid v2. TooManyItems. Marglyph's TooManyItems Create and enchant items in-game, including mod items. 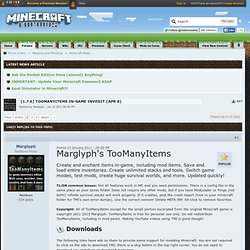 Save and load entire inventories. Create unlimited stacks and tools. Switch game modes, test mods, create huge survival worlds, and more. Updated quickly! TL;DR common issues: Not all features work in MP, and you need permissions. Copyright: All of TooManyItems except for the small portion excerpted from the original Minecraft game is copyright 2011-2013 Marglyph. Downloads The following links have ads on them to provide some support for modding Minecraft. Non-Forge: Please refer to these jar mod installation instructions, or to your launcher's instructions if you are using a launcher.