Why we should all have a basic income. Consider for a moment that from this day forward, on the first day of every month, around $1,000 is deposited into your bank account – because you are a citizen. 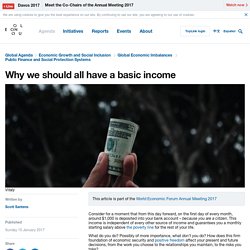 This income is independent of every other source of income and guarantees you a monthly starting salary above the poverty line for the rest of your life. What do you do? Possibly of more importance, what don’t you do? How does this firm foundation of economic security and positive freedom affect your present and future decisions, from the work you choose to the relationships you maintain, to the risks you take? The idea is called unconditional or universal basic income, or UBI. A promise of equal opportunity “Basic income” would be an amount sufficient to secure basic needs as a permanent earnings floor no one could fall beneath, and would replace many of today’s temporary benefits, which are given only in case of emergency, and/or only to those who successfully pass the applied qualification tests.

Spotify is causing a major problem for economists - Business Insider Nordic. The world's biggest hedge fund thinks the next radical change in central-bank policy is almost upon us - Business Insider Nordic. What happens if we pay everyone just to live? Stephen Wilkes/Getty By Hal Hodson EACH month, Nathalie Kuskoff repeats the process that ensures her family’s security. 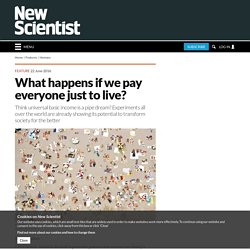 Her two young children both have chronic illnesses, so their apartment in southern Finland is mostly paid for by the government, which also helps with childcare, medical bills and education. “I get a lot of different social benefits because of my situation – I mean a lot,” she says. They come at a price: relentless form-filling. Most developed economies have some form of welfare state to redistribute wealth from the economically active to those who are unemployed or can’t work. But as Kuskoff and many others find, welfare on the basis of need is a cumbersome, bureaucratic affair. At its simplest, the premise is to replace welfare with a contract promising everyone the same money unconditionally, covering basic human needs – food, shelter, clothing – which people can add to by working. Working Hours. Hours of Work in U.S. History. Robert Whaples, Wake Forest University In the 1800s, many Americans worked seventy hours or more per week and the length of the workweek became an important political issue. 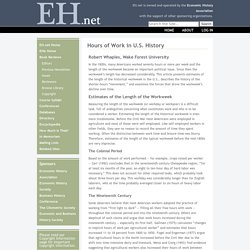 Since then the workweek’s length has decreased considerably. This article presents estimates of the length of the historical workweek in the U.S., describes the history of the shorter-hours “movement,” and examines the forces that drove the workweek’s decline over time. Tutti i numeri sulle retribuzioni in Italia. For the first time, less than 10 percent of the world is living in extreme poverty, World Bank says. The World Bank provided some relief from bad news this week with some fresh, positive data: For the first time ever, it estimates that the number of people around the world living in extreme poverty will fall below 10 percent. 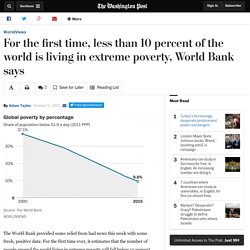 Using an updated international poverty line of USD $1.90 a day, the Bank estimated that global poverty has fallen from 12.8 percent of the world's population in 2012 to 9.6 percent of the global population in 2015. As tech threatens jobs, we must test a universal basic income. Robotics is still muscling in on manufacturing (Image: Jasper Juinen/Bloomberg via Getty Images) Not so long ago, the idea that technology would destroy jobs and leave us unemployed was considered a fallacy. 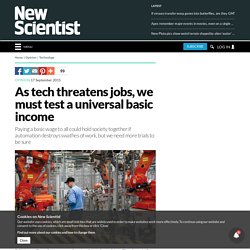 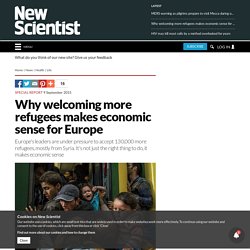 For more than a year, world news has reported desperate refugees, most from war-torn Syria, dying in their attempts to reach Europe. Most governments refused to let them in. Businessinsider. Falling meteor may have changed the course of Christianity - space - 22 April 2015. Read full article Continue reading page |1|2. 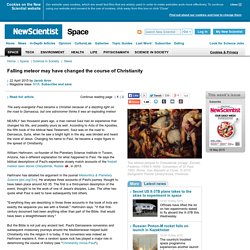 It's time to let national happiness guide political policy - opinion - 26 April 2015. The real feel-good factors must be allowed to guide government decisions alongside economic measures, says an economist and Labour peer MORE than 200 years ago Thomas Jefferson declared: "The care of human life and happiness... is the only legitimate object of good government. 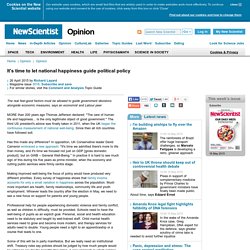 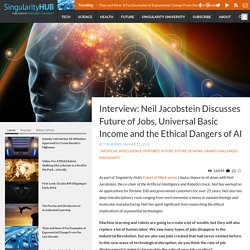 Neil has worked on AI applications for Fortune 100 and government customers for over 25 years. Neil also has deep interdisciplinary roots ranging from environmental sciences to nanotechnology and molecular manufacturing. Neil has spent significant time researching the ethical implications of exponential technologies. From capitalism to consensus. Today the Swarm launches the first basic income program. 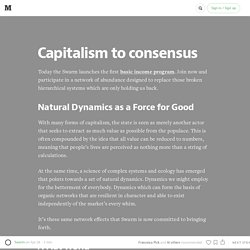 Join now and participate in a network of abundance designed to replace those broken hierarchical systems which are only holding us back. Natural Dynamics as a Force for Good. The Industries Plagued by the Most Uncertainty. It’s a cliché to say that the world is more uncertain than ever before, but few realize just how much uncertainty has increased over the past 50 years.

To illustrate this, consider that patent applications in the U.S. have increased by 6x (from 100k to 600k annually) and, worldwide, start-ups have increased from 10 million to almost 100 million per year. That means new technologies and new competitors are hitting the market at an unprecedented rate. Although uncertainty is accelerating, it isn’t affecting all industries the same way. That’s because there are two primary types of uncertainty — demand uncertainty (will customers buy your product?) And technological uncertainty (can we make a desirable solution?) Demand uncertainty arises from the unknowns associated with solving any problem, such as hidden customer preferences. The bitcoin rush: Pioneers on the financial frontier - tech - 29 January 2015. Meet miners, outlaws and sheriffs all striving to get ahead in the volatile new world of virtual money THE past year has seen a 21st century gold rush, and speculators have been falling over themselves for a piece of the action.

The discovery of gold always brings a world in its wake and bitcoin – a virtual currency "mined" using a computer – is no exception. There are miners chasing gold, crooks targeting the naive, black market traders operating outside the law and regulators trying to bring order to an upstart community. Paying everyone a basic income would kill off low-paid menial jobs. You take a large chunk of a country’s tax revenues and pay people a few thousand pounds a year to do nothing. That’s the essence of an unconditional basic income scheme – and it took less than a day for the Green party’s version, at £3,744 a year, to be emphatically slapped down. As Robots Grow Smarter, American Workers Struggle to Keep Up. A machine that administers sedatives recently began treating patients at a Seattle hospital. At a Silicon Valley hotel, a bellhop robot delivers items to people’s rooms. Last spring, a software algorithm wrote a breaking news article about an earthquake that The Los Angeles Times published.

Although fears that technology will displace jobs are at least as old as the Luddites, there are signs that this time may really be different. The technological breakthroughs of recent years — allowing machines to mimic the human mind — are enabling machines to do knowledge jobs and service jobs, in addition to factory and clerical work. Le 9 balle sull’immigrazione (smentite dai numeri) The Invisible Economy. Our techniques for measuring economic performance are obsolete, obscuring a complete picture of how we're faring.

Reuters Our techniques for measuring economic performance are obsolete. So we reach improper conclusions about the state of the economy. The economic recovery is probably more robust than we realize. Welcome to Forbes. The Invisible Economy. 10 Job Skills You'll Need in 2020. The Networked Economy promises to transform just about every aspect of how people live and work. No question about it: The Networked Economy is the next economic revolution. In the coming years, it will offer unprecedented opportunities for businesses and improve the lives of billions worldwide. In fact, the revolution is already under way. “Over the last few decades, we’ve grown beyond the industrial economy to the IT economy and the Internet economy, each of which led to significant inflection points in growth and prosperity,” says Vivek Bapat, SAP’s global vice president for portfolio and strategic marketing.

“Now we’re looking at the Networked Economy.” A guaranteed income for every American would eliminate poverty — and it wouldn't destroy the economy. Eliminating poverty seems like an impossibly utopian goal, but it's actually pretty easy: we can just give people enough money that they're above the poverty line. World's Second-Richest Man Calls For Three-Day Workweek. By Bryce Covert. The Long-Term Unemployment Crisis Is as Bad as Ever. The Rich and Their Robots Are About to Make Half the World's Jobs Disappear.

7 Predictions For The Future Of Work. Everything you thought you knew about the workplace is already outdated. Base rate fallacy. Base rate fallacy, also called base rate neglect or base rate bias, is an error in thinking. China Becomes World's Third-largest Producer of Research Articles. Asimmetria informativa. La Grecia reinventa la sua economia: senza euro, senza intermediari e con autogestione operaia. The wonder year: Why 1978 was the best year ever - environment - 11 July 2013. Look to complexity theory to solve the aid problem - health - 16 December 2013. Bitcoin moves beyond mere money - tech - 20 November 2013. First sign that humanity is slowing its carbon surge - environment - 06 November 2013. World Development Report - World Development Report 2013: Jobs. Ratio of Job Seekers to Job Openings Slips Below 3-to-1 for First Time in Nearly Five Years, but Is Still as High as in Worst Month of Early 2000s Downturn.

How Technology Is Destroying Jobs. The Management Revolution That's Already Happening. Changes in Income Inequality Among U.S. Tax Filers between 1991 and 2006: The Role of Wages, Capital Income, and Taxes by Thomas L. Hungerford. AI gets involved with the law - tech - 17 May 2013. Adventures With Bitcoins.