Lull in Summer Rain (1916) Dedicated to the Exploring and Tracing of Quotations. Studying the Brain Can Help Us Understand Our Unscientific Beliefs. Editors’ Note: Portions of this post appeared in similar form in a December, 2009, piece by Jonah Lehrer for Wired magazine. 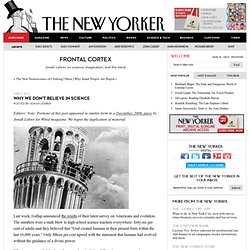 We regret the duplication of material. Last week, Gallup announced the results of their latest survey on Americans and evolution. The numbers were a stark blow to high-school science teachers everywhere: forty-six per cent of adults said they believed that “God created humans in their present form within the last 10,000 years.” Ray Bradbury on Space, Education, and Our Obligation to Future Generations: A Rare 2003 Interview. By Maria Popova “Anything that puts a sense of the miraculous in you… Anything that makes you feel alive is good.” 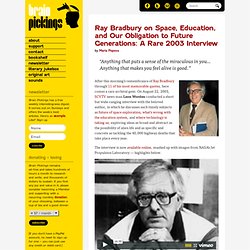 After this morning’s remembrance of Ray Bradbury through 11 of his most memorable quotes, here comes a rare archival gem: On August 22, 2003, SCVTV news man Leon Worden conducted a short but wide-ranging interview with the beloved author, in which he discusses such timely subjects as future of space exploration, what’s wrong with the education system, and where technology is taking us, exploring ideas as broad and abstract as the possibility of alien life and as specific and concrete as tackling the 40,000 highway deaths that take place every year. 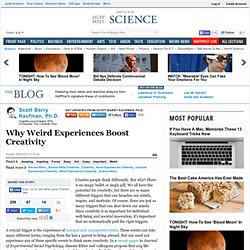 The Neuroscience of Your Brain on Fiction. C. S. Lewis on "School Stories" and Media Distortion as a Greater Fiction Than Fiction. How To Stay Cool Under Pressure. Tuesday, May 29, 2012 Cognitive scientist Sian Beilock writes: “Our performance is often linked to financial incentives. 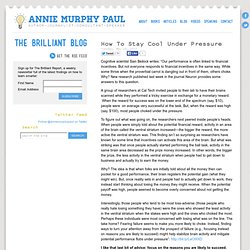 But not everyone responds to financial incentives in the same way. While some thrive when the proverbial carrot is dangling out in front of them, others choke. Why? New research published last week in the journal Neuron provides some answers to this question. Weighing the words of our different inner voices. Excuse me while I try to get a word in edgewise. 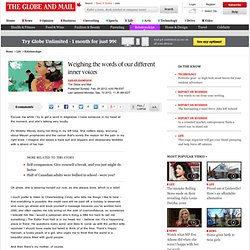 I have someone in my head at the moment, and she’s talking very loudly. It’s Wobbly Wendy doing her thing in my left lobe. Molecular Gastronomy in Aisle 6: Kits for the Modern Cook. Equal parts periodic table and Gourmet Magazine, Molecule-R has an Apple-like flair for design. 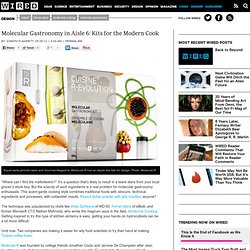 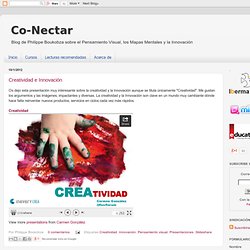 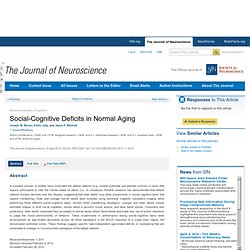 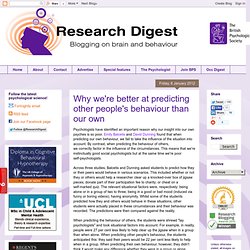 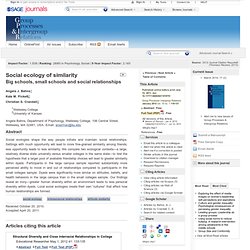 Settings with much opportunity will lead to more fine-grained similarity among friends; less opportunity leads to less similarity. We compare two ecological contexts—a large, relatively diverse state university versus smaller colleges in the same state—to test the hypothesis that a larger pool of available friendship choices will lead to greater similarity within dyads. Participants in the large campus sample reported substantially more perceived ability to move in and out of relationships compared to participants in the small colleges sample.

To 'think outside the box,' think outside the box. Want to think outside the box? Try actually thinking outside of a box. In a study to be published in an upcoming issue of Psychological Science, a journal of the Association for Psychological Science, researchers had students think up solutions to problems while acting out various metaphors about creative thinking and found that the instructions actually worked. The authors of the new paper were inspired by metaphors about creativity found in boardrooms to movie studios to scientific laboratories around the world and previous linkages established between mind and body. Angela Leung of Singapore Management University and her coauthors from the University of Michigan, Cornell University, and others wondered if the same was true of metaphors about creativity. 5 things you didn't know about the beginning of a relationship.

Why Love Matters More (And Less) Than You Think - Umair Haque. Taming the Wandering Mind. Friedman_foerster2001. Less thinking biases in a foreign tongue. Creativity Happens When You Least Expect It. It's well known that there are circadian or daily rhythms in basic physiological functions like body temperature or digestion. Interestingly, these circadian rhythms extend to our psychological abilities too. Simply put, we tend to have more brainpower at our peak circadian arousal time, which leads to success on activities that require us to concentrate and mentally 'buckle down.' Morning types (i.e., people who are most alert in the morning) excel on a whole host of cognitive tasks when they complete these tasks early in the day. This is especially true for tasks that require working memory , like systematically reasoning through a problem or juggling numbers in your head.

Both Convergent and Divergent Thinking are Necessary for Creativity. 0Share Synopsis What happens when the IQ test taker is suddenly asked to be the IQ test constructor? Study of literature under attack? A Stanford scholar to the rescue. Photos by L.A. Cicero Joshua Landy, co-director of Stanford's Philosophy and Literature Initiative, is the author of the forthcoming 'How to Do Things with Fictions.' "Spending time in the presence of works of great beauty can powerfully change your life. " Strong statement. The Fatal Flaw of the Storyteller. A recent series revealed a lot about Apple's manufacturing process in China. Camille Seaman Photography - Earth Series: Part I, Ger , The Last Iceberg, The Last Iceberg Series II , Dark Ice, A Penguin's Life, This Other World, The Big Cloud. Official Website. Prismatic blog - Prismatic Blog - Clustering Related Stories.

Under the Namibian Sky - The Movie. The 'If' Moment: A Brief History of Alternate Histories. Peter Norvig - The Unreasonable Effectiveness of Data. How Titanoboa, the 40-Foot-Long Snake, Was Found. Geneticist Runs Personalized Medicine Superstudy On Himself. Time-Lapse Starscape Videos Show Heavens in Motion. America, the Beautiful (And Nutty): A Skeptic's Lament. Almost one-third of Americans believe the ancient Mayan prediction of global calamity this December is “somewhat true,” according to a recent National Geographic poll. Luc Sante, Author of Low Life, on the Benefits of Self-Editing. Rise of the Neuronovel. Learn Science at Nature. Welcome To Alexander Street Press.