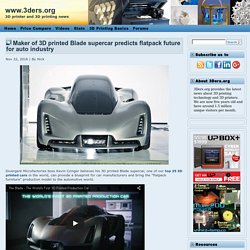 Czinger is the brains behind the Blade supercar, a vehicle that offers a new approach to car design. The key principle of the vehicle is a modular chassis that is constructed from carbon-fiber tubes that slot into 70 3D printed aluminum nodes. These connector blocks combine with the lightweight carbon fiber of the car body to give the Blade a rigid structure. Dutch hotel's 3D printed, cutting-edge conference center nears development. Nov 21, 2016 | By Nick A Dutch hotel is closing in on the funds it needs to produce a high-tech 3D printed conference center that can recreate the ambience of New York’s Central Park and other iconic locations. 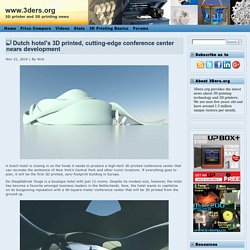 If everything goes to plan, it will be the first 3D printed, zero-footprint building in Europe. De Slaapfabriek Teuge is a boutique hotel with just 12 rooms. Despite its modest size, however, the hotel has become a favorite amongst business leaders in the Netherlands. US Marines test Invent3D printer in the field. Oct 27, 2016 | By Nick The US Marines have started testing additive manufacturing in the field and it could pave the way for the military to carry 3D printers as a matter of course. 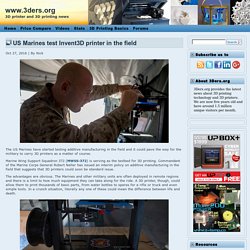 Marine Wing Support Squadron 372 (MWSS-372) is serving as the testbed for 3D printing. Commandant of the Marine Corps General Robert Neller has issued an interim policy on additive manufacturing in the field that suggests that 3D printers could soon be standard issue. The advantages are obvious. The Marines and other military units are often deployed in remote regions and there is a limit to how much equipment they can take along for the ride. LLNL researchers use 3D printing to advance target production for material strength tests. Oct 23, 2016 | By Tess As 3D printing technologies advance they become increasingly viable for applications within various industries, from healthcare, to aerospace, to transportation, and defense. 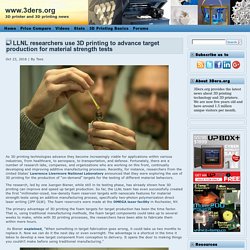 Fortunately, there are a number of research labs, companies, and organizations who are working on this front, continually developing and improving additive manufacturing processes. Recently, for instance, researchers from the United States’ Lawrence Livermore National Laboratory announced that they were exploring the use of 3D printing for the production of “on-demand” targets for the testing of different material behaviors. The research, led by one Juergen Biener, while still in its testing phase, has already shown how 3D printing can improve and speed up target production. NASA challenges students to design 3D printable medical tools for astronauts going to Mars. Oct 28, 2016 | By Tess NASA’s Future Engineers program has just launched its fifth space innovation challenge: the Mars Medical Challenge. 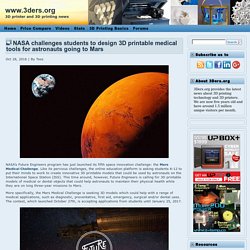 Like its pervious challenges, the online education platform is asking students K-12 to put their minds to work to create innovative 3D printable models that could be used by astronauts on the International Space Station (ISS). This time around, however, Future Engineers is calling for 3D printable models of medical or dental objects that could help astronauts to maintain their physical health while they are on long three-year missions to Mars. More specifically, the Mars Medical Challenge is seeking 3D models which could help with a range of medical applications, such as diagnostic, preventative, first aid, emergency, surgical and/or dental uses. Organovo travaille sur la bio-impression de tissus de foie humain. TOP 10 des applications de l'impression 3D dans le domaine militaire. 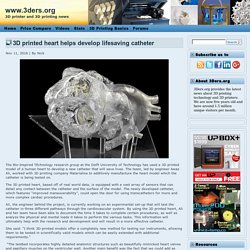 The team, led by engineer Awaz Ali, worked with 3D printing company Materialise to additively manufacture the heart model which the catheter is being tested on. The 3D printed heart, based off of real world data, is equipped with a vast array of sensors that can detail any contact between the catheter and the surface of the model. 3D printed cat tongue mimic could have applications for soft robotics industry. Nov 22, 2016 | By Tess If you’ve ever been licked by a cat, you’ll know that their tiny tongues are actually quite rough, with a texture comparable to that of sandpaper. 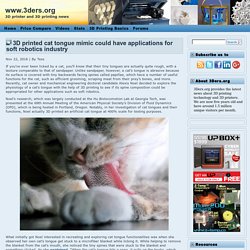 Unlike sandpaper, however, a cat’s tongue is abrasive because its surface is covered with tiny backwards facing spines called papillae, which have a number of useful functions for the cat, such as efficient grooming, scraping meat from their prey’s bones, and more. Recently, cat owner and mechanical engineering doctoral candidate Alexis Noel decided to explore the physiology of a cat’s tongue with the help of 3D printing to see if its spine composition could be appropriated for other applications such as soft robotics. Noel’s research, which was largely conducted at the Hu Biolocomotion Lab at Georgia Tech, was presented at the 69th Annual Meeting of the American Physical Society’s Division of Fluid Dynamics (DFD), which is being hosted in Portland, Oregon. New 'Landfillament' lets you 3D print with trash. Nov 22, 2016 | By Benedict North Dakota materials company 3D-Fuel has introduced “Landfillament,” a new 3D printing material made from recycled waste. 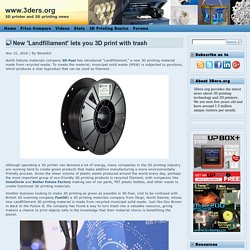 To create the material, municipal solid waste (MSW) is subjected to pyrolysis, which produces a char byproduct that can be used as filament. Australia to open state-of-the-art biofabrication institute for 3D printing implants. Nov 21, 2016 | By Tess Australia’s Herston Health Precinct has announced that it will be opening a new biofabrication institute on its premises. 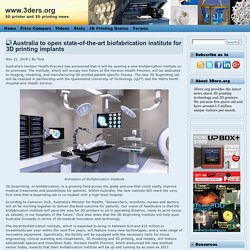 The institute, which will occupy two floors at the Herston Health Precinct, will be dedicated to imaging, modeling, and manufacturing 3D printed patient-specific tissues. Dubai teen wins award for 'mind-controlled' 3D printed bionic arm. Nov 21, 2016 | By Benedict Rishabh Java, a 14-year-old boy from the UAE, has scooped the ‘Best Innovative Project’ prize at the first Gulf 3D Printing Olympiad. 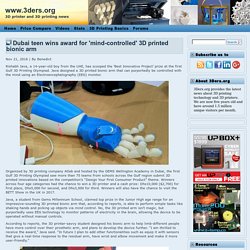 Java designed a 3D printed bionic arm that can purportedly be controlled with the mind using an Electroencephalography (EEG) monitor. Scientists have developed a zero-gravity metal 3D printer for space. Nov 22, 2016 | By Tess With the International Space Station’s Additive Manufacturing Facility (AMF) in full swing, the concept of having a 3D printer in space is becoming increasingly familiar. Despite these advances, however, there are still a number of hurdles and challenges that must be met in order for additive manufacturing to be used to its full potential in the cosmos. Metal 3D printing, for instance, remains a difficult task, but one that could prove essential for maintaining equipment and creating parts necessary for journeys to Mars.

TOP 10 des scanners 3D low-cost. 3D printed shoes: has this designer found the perfect model for making, marketing, and selling them? Nov 18, 2016 | By Tess With companies like Adidas and Nike getting on board with 3D printing, it is difficult to deny that additive technology has an increasingly important role to play in the footwear manufacturing industry. As we’ve seen, from small-scale designers to established companies, 3D printing has offered a revolutionary way to create new designs and unprecedented customization. Importantly, the technology has also offered a viable alternative to large-scale manufacturing practices, which have significant footprints in terms of material and energy waste.

3D printed parts improve interiors of luxury helicopters. Nov 8, 2016 | By Benedict Mecaer Aviation Group (MAG), a leader in customizing high-end helicopter interiors, is using industrial 3D printers from Roboze to create end-use parts for its designs. The company is using advanced materials like PEEK for parts that will be installed on forthcoming helicopters. Interior of a MAG helicopter. Top 30 3D printed Halloween costumes, props, and decorations. Oct 26, 2016 | By Tess Halloween is without doubt my favorite time of year, with the leaves turning bright red, pumpkins glowing on porch steps, and all scary and spooky things taking center stage (not to mention all the candy!). In the spirit of the season, we thought we’d once again put together a list of the very best 3D printed costumes, props, and decorations that are out there for 2016 to help make your Halloween as creative, DIY, and maker-friendly as possible. 3D printed Halloween costume & prop Best 3D printed Halloween costume & prop #1: Chaos Space Marine Mask.

3D printed organs on a chip could one day put an end to animal testing. Oct 24, 2016 | By Nick The heart-on-a-chip is entirely 3D printed with built-in sensors that measure the contractile strength of the tissue, providing scientists with new possibilities for studying the musculature of the heart. CREDIT: Johan Lind, Disease Biophysics Group/Lori K. Sanders, Lewis Lab/Harvard University Researchers from the Wyss Institute for Biologically Inspired Engineering at Harvard University and the Harvard John A.