Right to be Forgotten

The Right To Be Forgotten. Posted by Tara Taubman-Bassirian on March 18, 2015. 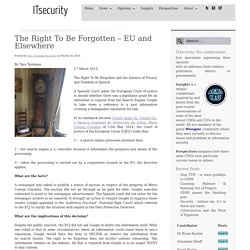 By Tara Taubman 17 March 2015 The Right To Be Forgotten and the balance of Privacy and Freedom of Speech. A Spanish Court asked the European Court of justice to decide whether there was a legitimate grant for an individual to request from the Search Engine Google to take down a reference to a past information creating a damageable reputation for him. In its landmark decision Google Spain SL, Google Inc. v Agencia Española de Protección de Datos, Mario Costeja González of 13th May 2014, the Court of Justice of the European Union (CJEU) holds that: 1 – a search engine processes personal data;

The Right Tools: Europe's Intermediary Liability Laws and the 2016 General Da... Abstract The so-called “Right to Be Forgotten” established by the Court of Justice of the European Union in 2014 is about to change. 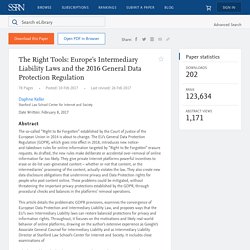 The EU's General Data Protection Regulation (GDPR), which goes into effect in 2018, introduces new notice-and-takedown rules for online information targeted by “Right to Be Forgotten” erasure requests. As drafted, the new rules make deliberate or accidental over-removal of online information far too likely. They give private Internet platforms powerful incentives to erase or de-list user-generated content – whether or not that content, or the intermediaries’ processing of the content, actually violates the law. 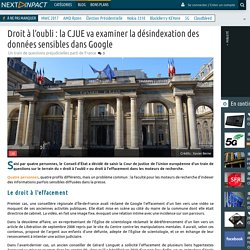 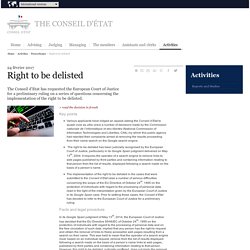 > read the decision in french Key points Various applicants have lodged an appeal asking the Conseil d’Etat to quash (rule as ultra vires) a number of decisions made by the Commission nationale de l’informatique et des libertés (National Commission of Information Technologies and Liberties, CNIL) by which this public agency had rejected their complaints aimed at removing the results proceeding from their name search on the Google search engine.

Russian Right to be Forgotten

Global Application of French “Right to Be Forgotten” Law Would Pose Threat to Free Expression. Intern Emine Yildirim contributed to this post. 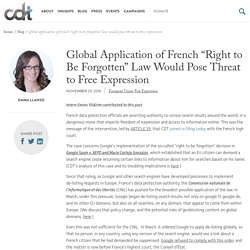 French data protection officials are asserting authority to censor search results around the world, in a dangerous move that imperils freedom of expression and access to information online. This was the message of the intervention, led by ARTICLE 19, that CDT joined in filing today with the French high court. The case concerns Google’s implementation of the so-called “right to be forgotten” decision in Google Spain v. AEPD and Mario Costeja Gonzales, which established that an EU citizen can demand a search engine cease returning certain links to information about him for searches based on his name. Google face à la CNIL, la défense du droit à l'oubli contre le droit à l'information? Google a supprimé 1 milliard de liens cette année. 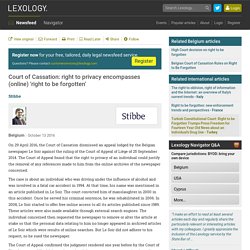 The Court of Appeal found that the right to privacy of an individual could justify the removal of any references made to him from the online archives of the newspaper concerned. The case is about an individual who was driving under the influence of alcohol and was involved in a fatal car accident in 1994. At that time, his name was mentioned in an article published in Le Soir. The court convicted him of manslaughter in 2000 in this accident. Hammering Square Pegs into Round Holes. In this paper, Michel Reymond explores the extraterritorial effects of the Google Spain decision rendered in May 2014 by the European Court of Justice. 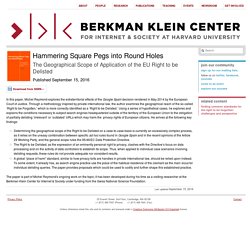 Through a methodology inspired by private international law, the author examines the geographical reach of the so-called ‘Right to be Forgotten,’ which is more correctly identified as a ‘Right to be Delisted.’ Using a series of hypothetical cases, he explores and explains the conditions necessary to subject search engines headquartered outside of the territory of the European Union to the obligation of partially delisting ‘irrelevant’ or ‘outdated’ URLs which may harm the privacy rights of European citizens.

He arrives at the following key findings: The paper is part of Michel Reymond's ongoing work on the topic; it has been developed during his time as a visiting researcher at the Berkman Klein Center for Internet & Society under funding from the Swiss National Science Foundation. Researchers Uncover a Flaw in Europe’s Tough Privacy Rules. Europe likes to think it leads the world in protecting people’s privacy, and that is particularly true for the region’s so-called right to be forgotten. 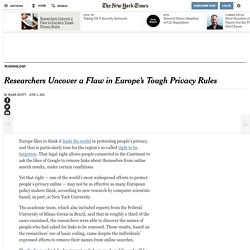 That legal right allows people connected to the Continent to ask the likes of Google to remove links about themselves from online search results, under certain conditions. Yet that right — one of the world’s most widespread efforts to protect people’s privacy online — may not be as effective as many European policy makers think, according to new research by computer scientists based, in part, at New York University.

The academic team, which also included experts from the Federal University of Minas Gerais in Brazil, said that in roughly a third of the cases examined, the researchers were able to discover the names of people who had asked for links to be removed. Those results, based on the researchers’ use of basic coding, came despite the individuals’ expressed efforts to remove their names from online searches. Dr. La Cour de cassation élargit le droit à l'oubli aux archives des journaux. Devant la Cour de cassation, la liberté de la presse peut l’emporter sur le droit à l’oubli. 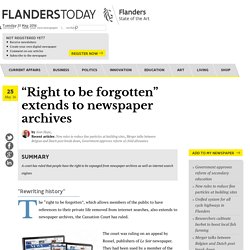 The court was ruling on an appeal by Rossel, publishers of Le Soir newspaper. They had been sued by a member of the public who had been involved in a traffic accident in the past and who demanded that all reference to the matter be expunged from the paper’s archives. Delhi banker seeks `right to be forgotten' online - Times of India. NEW DELHI: Does Right to Life under the Constitution also include "right to be forgotten" online? 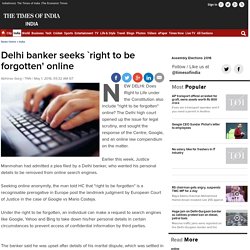 The Delhi high court opened up the issue for legal scrutiny, and sought the response of the Centre, Google, and an online law compendium on the matter. Earlier this week, Justice Manmohan had admitted a plea filed by a Delhi banker, who wanted his personal details to be removed from online search engines. Europe’s Web Privacy Rules: Bad for Google, Bad for Everyone. IT’S been a rough few months for Google in Europe. Not only has the hit the company with a second antitrust investigation, but — in a move that has received less press, but could have wider consequences — French regulators have pushed it to restrict search results all over the world to comply with their “right to be forgotten” privacy laws.

That’s a problem for a company whose business model is built on search. But it may be an even bigger problem for Internet users. If a European government can control what people all over the world get to see on the Internet, why can’t every other country do the same? Droit à l'oubli - Pourquoi Google a été condamné - ZDNet. EU’s ‘Right to Be Forgotten’ policy sets bad precedent for free expression – EurActiv.com. Last week’s announcement that Google will begin suppressing links to URLs not only for searches on EU country-level domains, but also for searches conducted from within EU countries, is bad news, write Jens-Henrik Jeppesen and Emma Llansó. Jens-Henrik Jeppesen is director for European affairs and Emma Llansó is director for the Free Expression Project at the Center for Democracy and Technology. The move is the latest development in the debate over the “right to be forgotten”.

In 2014, the Court of Justice of the European Union found that under the data protection directive, people in the EU have a right to demand that search engines de-list URLs linking to information that is “inadequate, irrelevant or no longer relevant, or excessive.” We are sympathetic to people distressed by information about them in the public domain, we understand the desire to suppress such information in certain contexts, and we support targeted and proportionate policies to protect individuals’ right to privacy. Google advisory council: Right to delist should only apply in EU. To help it handle the EU ruling that forces it to delist certain results about people, Google assembled a team of expert advisors that travelled the continent, seeking out various opinions on how best to implement Europeans’ data protection rights. On Friday that advisory council published its report, providing recommendations for the way forward.

The Google advisors’ report (embedded below) makes for a fascinating read, but the highlights are its assertion that the delisting should only apply in Europe, and its nuanced discussion of when publishers or webmasters should be notified of delisting. Google will apply the ‘right to be forgotten’ to all EU searches next week. Google today confirmed that it will remove some search results from all of its sites starting next week, if those searches are made within the European Union. In 2014, an EU court decided that Google must comply with requests to remove some search results, in a decision that became known as "the right to be forgotten.

" As part of that decision, European users can submit a request to Google, asking the company to delist results that are "no longer relevant" or otherwise outdated. Until now, however, Google would only delist results for its European sites, such as google.co.uk and google.fr. Droit à l'oubli : la CNIL proche de sanctionner Google - Politique. Google now uses geolocation to hide ‘right to be forgotten’ links from its search results. As promised, Google today announced that it is making a number of changes to how it handles links it has delisted under Europe’s ‘right to be forgotten‘ regulations. Instead of simply delisting links from the various regional versions of its search engine, it will now use geolocation to remove these links from all searches that come from a given region. To be delisted according to the European ruling, information must be “inadequate, irrelevant, no longer relevant or excessive, and not in the public interest.”

Data and Goliath. March 2015 W. W. Norton & Company 320 Pages Hardcover ISBN: 978-0393244816 $27.95. The Final Draft of Europe's "Right to Be Forgotten" Law. Report of the Advisory Committee to Google on the Right to Be Forgotten. Forbes Welcome. The U.S. Should Adopt the "Right to Be Forgotten" Online. For The Motion Paul Nemitz Dir. of Fundamental Rights & Citizenship, DG Justice & Consumers, EU Commission Paul F. Nemitz is the director for fundamental rights and union citizenship in the Directorate General for Justice and Consumers of the European Commission. The free movement of people in Europe, data protection, and children's rights are also key responsibilities of his Directorate. Learn more Eric Posner Professor of Law, University of Chicago Eric Posner is the Kirkland and Ellis Distinguished Service Professor of Law at the University of Chicago. Learn more Against The Motion Andrew McLaughlin CEO, Digg and Instapaper & Fmr.