8. Changing Places Key Words – AQA AS Geography. Location – where a place is (the GPS or co-ordinates) Locale – The place where something happens, is set or has particular events associated with it (a house, park, office) Place – Location with meaning. 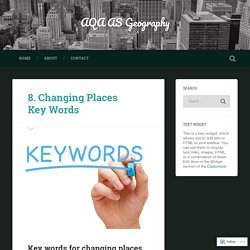 SCO ChangingPlace ChangingPlaces. Changing Places: some thoughts on AS and A Level core content. Despite some of the final specifications from exam boards not yet being approved, we do have the AS and A Level subject content set out by the government which was published in December 2014. 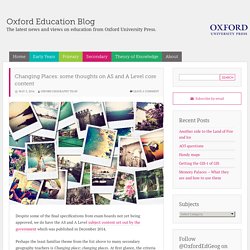 Perhaps the least familiar theme from the list above to many secondary geography teachers is Changing place; changing places. At first glance, the criteria may look daunting and it may be more straightforward to look at how the boards have shaped this content. I will focus on AQA here. Where the theme fits into the AQA qualifications At AS Geography, this theme is examined as part of Component 2 (a paper of 1.5 hours, worth 50 per cent of the AS) along with the geography fieldwork investigation. The topic appears at A Level in Component 2: Human geography (a 2.5 hour paper worth 40 per cent). Important Advice from AQA on Changing Places. 92% of us are breathing unsafe air. This map shows just how bad the problem is.

Clean energy is a key topic at the World Economic Forum's Annual Meeting 2017. 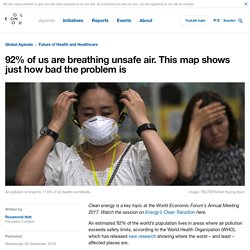 Watch the session on Energy’s Clean Transition here. An estimated 92% of the world’s population lives in areas where air pollution exceeds safety limits, according to the World Health Organization (WHO), which has released new research showing where the worst – and least – affected places are. Interactive maps highlight the magnitude of the problem: swathes of the world are coloured yellow, orange, red and purple, meaning air quality breaches WHO limits. Image: WHO Parts of Africa, Eastern Europe, India, China and the Middle East are the biggest regional danger spots. Large areas of developed countries including the US, Canada, Australia, New Zealand and Scandinavian nations meet safety guidelines.

Even within countries, levels of air pollution can vary. Primary school for all 'not until 2042', says Unesco. Only 3% of UK adults feel ashamed at wasting food, poll finds. Only 3% of UK householders think there is a stigma attached to wasting food, while many try to save money by switching off lights or turning down the heating, instead of reducing food waste, according to a report. 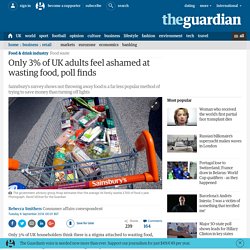 The Sainsbury’s survey of food waste habits shows that the vast majority of people fail to see the value of watching out for food waste, compared with other money-saving habits that have become second nature. According to the poll of more than 5,000 UK adults, 74% of householders actively turn lights off when they leave a room and 55% turn down the heating. Nearly one-third (32%) have changed energy suppliers to keep household bills down, saving an average of £200 a year.

POPULATION AND THE ENVIRONMENT

Geographies of Globalization (Routledge Contemporary Human Geography Series): Amazon.co.uk: Warwick Murray: 9780415318006: Books. Review 'The book is very well written, carrying the reader along with all the zest and enthusiasm that characterise a winner of one of the 2006 national tertiary teaching awards. 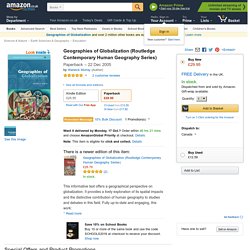 Reading it often seems like being in a high-energy classroom.' - New Zealand Journal of Social Sciences 'A valid contribution to the globalisation literature as an introductory level or foundation text, combining key themes and empirical case studies with some key theoretical ideas. Dharavi Slum - A Look Inside India's Largest Slum. Out the 21 million people that live in Mumbai, a whopping 62% (or ~13 million people) live in the various slums around the city. 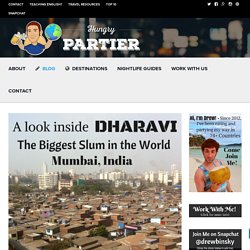 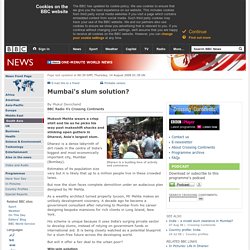 Dharavi is a dense labyrinth of dirt roads in the centre of India's biggest and most economically important city, Mumbai (Bombay). Estimates of its population size vary but it is likely that up to a million people live in these crowded lanes. But now the slum faces complete demolition under an audacious plan designed by Mr Mehta. As a wealthy architect turned property tycoon, Mr Mehta makes an unlikely development visionary.

A decade ago he became a government consultant after returning to Mumbai from his career designing bespoke mansions for rich clients in Long Island, New York. His scheme is unique because it uses India's surging private sector to develop slums, instead of relying on government funds or international aid. But will it offer a fair deal to the urban poor? Win-win solution. Dharavi Slum. Asia's largest slum, Dharavi, lies on prime property right in the middle of India's financial capital, Mumbai (Bombay). 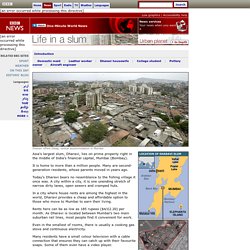 It is home to more than a million people. Many are second-generation residents, whose parents moved in years ago. An urbanist's guide to the Mumbai slum of Dharavi. Dharavi in brief Everything you’ve heard about Dharavi is true … and false. 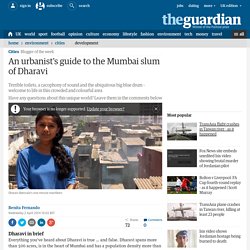 Dharavi spans more than 500 acres, is in the heart of Mumbai and has a population density more than 10 times the rest of the city. There are anywhere between 300,000 and a million people, with 750,000 being the most common estimate. There are businesses of every kind: it is something of an informal economic powerhouse. People in Dharavi live and labour, but they need better living conditions, infrastructure and sanitation. In Indian Slum, Misery, Work, Politics and Hope. India’s Dharavi Recycling Slumdog Entrepreneurs. For the past three decades, there has been a transformation of the recycling psyches that has been experienced across the globe. 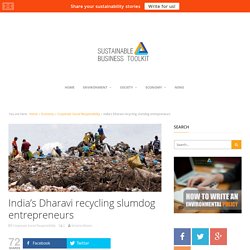 New consumerism heaped atop rapid urbanisation and population growth has left municipalities with overarching concerns regarding waste management. For this reason, recycling has become a worldwide multi-billion dollar industry and is set to increase as our consumer culture continues to accelerate.