30 Ideas for Your Opening Scene. Opening scenes are often written first and edited so many times, that after a while it’s easy to overlook the fact that they may no longer be the best choice, and that there may be more effective ways to begin your story. 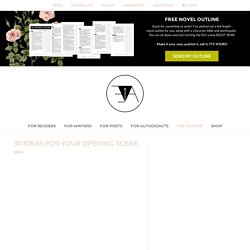 How well does your opening scene… Grab the reader’s attention? Introduce the main character? Set the tone for the story? Would any of the following ideas serve you better? A DIALOGUE – The spoken voice has a directness that not only grabs the reader, but is key to developing character. Don’t forget to share, and find more ideas in these posts… Like this: Like Loading... Related. Hannah Heath: Darkness in Fiction: 7 Tips for Writing Dark Stories. I enjoy dark stories. 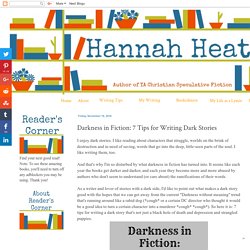 I like reading about characters that struggle, worlds on the brink of destruction and in need of saving, words that go into the deep, little-seen parts of the soul. I like writing them, too. And that's why I'm so disturbed by what darkness in fiction has turned into. It seems like each year the books get darker and darker, and each year they become more and more abused by authors who don't seem to understand (or care about) the ramifications of their words.

As a writer and lover of stories with a dark side, I'd like to point out what makes a dark story good with the hopes that we can get away from the current "Darkness without meaning" trend that's running around like a rabid dog (*cough* or a certain DC director who thought it would be a good idea to turn a certain character into a murderer *cough* *cough*). 1. 2. 3. 4. 5. Plotting With the Hero's Journey. By Janice Hardy, @Janice_Hardy On Monday we talked about the Three-Act Structure, which leads perfectly into the next most popular narrative structure--the Hero’s Journey. 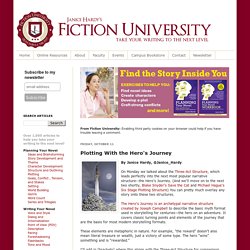 (And we'll move on to the next two shortly, Blake Snyder's Save the Cat and Michael Hague's Six Stage Plotting Structure) You can pretty much overlay any story onto these two structures. The Hero's Journey is an archetypal narrative structure created by Joseph Campbell to describe the basic myth format used in storytelling for centuries—the hero on an adventure. It covers classic turning points and elements of the journey that are the basis for most modern storytelling formats. These elements are metaphoric in nature. I’ll add in [brackets] where this aligns with the Three-Act Structure for comparison since we just talked about that.

This is what folks are talking about when they say start with the protagonist in the normal world. How to Spice Up Perfectly Good (but Boring) Scenes - Fiction Notes. In my work-in-progress, I’m studying a scene to see if I can tighten it in any way. 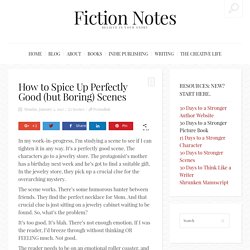 It’s a perfectly good scene. The characters go to a jewelry store. The protagonist’s mother has a birthday next week and he’s got to find a suitable gift. Deepening Our Story: Theme It Like You Mean It ~ WRITERS HELPING WRITERS® Our story’s themes—our messages to readers of what to value or believe—can add depth and meaning to our writing, but to avoid being too on-the-nose, our themes are usually developed in the story’s subtext. 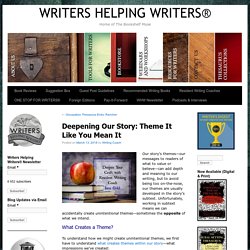 Unfortunately, working in subtext means we can accidentally create unintentional themes—sometimes the opposite of what we intend. What Creates a Theme? To understand how we might create unintentional themes, we first have to understand what creates themes within our story—what impressions we’ve created: Forget 'smart'—we need 'context cities' Since September, I have worked in, or visited, 18 cities in Europe, Australia, and the United States, listening throughout for common messages of harmony or discord. 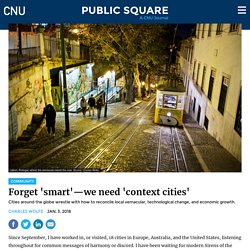 Reading Across a Dozen Literacies. This article will define each literacy while giving examples of "reading" within each category. 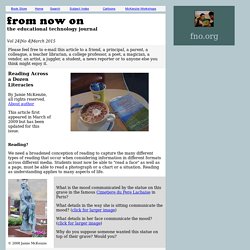 It takes special skills to read a swamp or a beach or a desert area. These skills also differ from region to region as the flora and fauna shift. Most of us have heard of swimmers caught in rip tides because they did not know how to read the signs or of visitors enjoying tidal flats suddenly swept up in an incoming tide much larger than anything they knew back home. Artistic Literacy. Voice Examples and Definition - Literary Devices. Definition of Voice Voice in literature is the individual style in which a certain author writes his or her works. 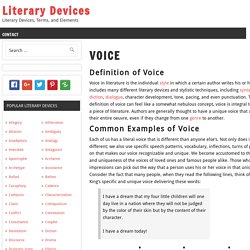 Voice includes many different literary devices and stylistic techniques, including syntax, semantics, diction, dialogue, character development, tone, pacing, and even punctuation. Atmosphere Examples and Definition - Literary Devices. Definition of Atmosphere Atmosphere in literature is the feeling, emotion, or mood that an author creates in a narrative through descriptive language. 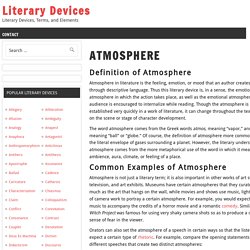 Thus this literary device is, in a sense, the emotional atmosphere in which the action takes place, as well as the emotional atmosphere that the audience is encouraged to internalize while reading. Though the atmosphere is usually established very quickly in a work of literature, it can change throughout the text depending on the scene or stage of character development. The word atmosphere comes from the Greek words atmos, meaning “vapor,” and sphaira, meaning “ball” or “globe.” 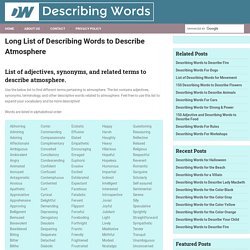 The list contains adjectives, synonyms, terminology, and other descriptive words related to atmosphere. Feel free to use this list to expand your vocabulary and be more descriptive! Words are listed in alphabetical order: Do you have additional describing words that should go on this list? Please contact us and we will add it shortly. Tone, mood, atmosphere & voice in writing. Whether your are writing a novel or short story, or are analysing one, defining tone, mood, atmosphere & voice, and recognising the differences between them is both important, and difficult.

The differences are subtle, but their use can make a real difference in how a reader reacts to a story, so are well worth exploring. “Tone” is the writer’s attitude that is expressed in the writing. Five Things: Creating an Atmosphere in your Writing. Kirsty Logan is a writer of fiction and journalism. Her debut collection, The Rental Heart and Other Fairytales, was published in March 2014. Creating the Mood of a Story: 5 Tips for Atmosphere.

The mood of a story develops out of multiple story elements: Setting, description, dialogue, and pacing. Read a definition of mood in literature, then 5 simple tips to craft your own novel’s mood better: What is the definition of mood in literature? As per the dictionary definition of mood, ‘mood’ in literature is the atmosphere or pervasive tone of a piece of writing. A short story is more likely to have a single, unifying mood (as in the eerie, dark stories of Edgar Allan Poe), while a typical novel might pass through multiple moods as narrative tension increases or decreases. Stanford’s concise list of literary terms notes the difference between mood as a literary term and mood as a grammatical term. Setting - Examples and Definition of Setting. Definition of Setting Setting is an environment or surrounding in which an event or story takes place.

Setting. Use Setting to Illuminate Your Plot, Characters and Theme. 21 Writing Prompts for Setting a Scene in Your Novel. When you’re writing (or rewriting) a scene, do you ever get the feeling you just don’t have enough to say? Fiction Writing Creating a Setting. How to Create a Memorable Setting For Your Novel. Building the Setting. The Short Form. How to Punch Up Your Action Scenes. By Alex Limberg, @RidethePen. Kreativ, Medium und Mitglieder Des Königshauses. Creating Atmosphere in Fiction By Esther Newton. Ezee Writer August 2012. Picking a Piece Apart & Plucking The Gems: Thoughts On The Killing—The Techniques That Make It Sensational (And How To Steal Them, Of Course!) By Bonnie Randall Special Guest Author. Setting: Using Scene To Enrich Your Writing. In both fiction and nonfiction, the setting is the general background against which your story takes place—the physical location and time period, both of which influence your characters and plot.

Teaching KIds to Write with Vivid Vocabulary. 20 Mystical Bridges That Will Take You To Another World. "No Ordinary Place: Writers and Writing in Occupied Palestine," Rima Najjar Merriman. Take a peek at the world's most exquisite libraries. 60 Historical Photos Worth 1000 Words. The 50 Coolest Fictional Cities. Writing Indoor Scenes by Rayne Hall. Crafting a Powerful Set-Up. Writing Fiction: 8 Wily Tips for Setting – The Writing Cooperative.