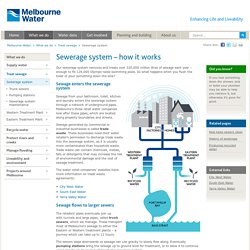 Melbourne’s three retail water companies look after these pipes, which are located along property boundaries and streets. Sewage generated by commercial or industrial businesses is called trade waste. These businesses need their water retailer’s permission to discharge trade waste into the sewerage system, as it is usually more contaminated than household waste. Trade waste can contain chemicals, metals, fats or detergents that may increase the risk of environmental damage and the cost of sewage treatment. The sewage treatment process. Producing recycled water - Melbourne Water. We produce high quality recycled water at our Eastern and Western treatment plants, using highly specialised treatment processes unique to each plant. 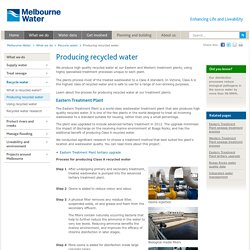 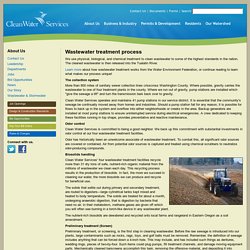 The cleaned wastewater is then released into the Tualatin River. Learn more about how wastewater treatment works from the Water Environment Federation, or continue reading to learn what makes our process unique! The collection system More than 800 miles of sanitary sewer collection lines crisscross Washington County. Home: Environmental health - Department of Health and Human Services, Victoria, Australia.

This site includes material maintained by the Department of Health as well as selected links to environmental health material produced by others across Australia and internationally. 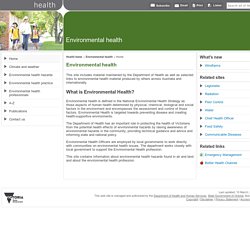 From Toilet to Tap. Wed, 05 Oct 2011 14:45:00 +1100 By Deakin Research Communications By Professor Michael Porter The paradox of Australia and water is that we have one of the highest per capita water catchments in the world; the problem very obviously is the distribution of rainfall relative to location of population and across a vast land mass. 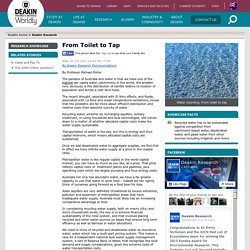 The recent drought, associated with El Nino effects, and floods, associated with La Nina and ocean temperature oscillations, reveal that the problems are far more about efficient distribution and relative costs than absolute scarcity of water. Recycling water, whether by recharging aquifers, tertiary treatment, or using household and local technologies, still comes down to a matter of whether allocated capital costs make the water supply sustainable. The History of Sanitary Sewers. Tracking down the roots of our sanitary sewers. MID_Insituform.pdf. Reusing and recycling water. Reusing and recycling alternative water supplies is a key part of reducing the pressure on our water resources and the environment. 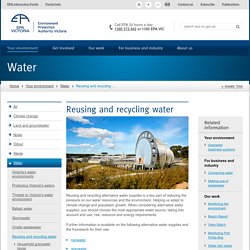 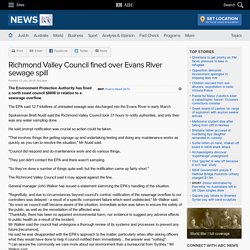 The EPA said 12.7 kilolitres of untreated sewage was discharged into the Evans River in early March. Spokesman Brett Nudd said the Richmond Valley Council took 31 hours to notify authorities, and only then was any water sampling done. He said prompt notification was crucial so action could be taken. "That involves things like getting signage up and undertaking testing and doing any maintenance works as quickly as you can to resolve the situation," Mr Nudd said. "Council did respond and do maintenance work and do various things.

"They just didn't contact the EPA and there wasn't sampling. "So they've done a number of things quite well, but the notification came up fairly short. " Hawaii's Waikiki beaches shut after sewage spill. The 500,000-gallon sewage spill, though, was a deal-breaker. 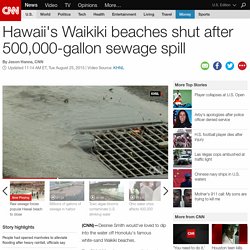 Lifeguards warned beachgoers to stay out of the ocean along a few miles of beach Monday because wastewater had flowed out of manholes during heavy rain overnight, the city's Department of Environmental Services and CNN affiliate Hawaii News Now reported. "I was coming down to have a swim, but I think I might pass now," Smith, clad in a black bathing suit with a towel over her shoulder, told Hawaii News Now. "It doesn't seem like paradise when you think that there could be nasties floating in it. " City officials said more than 500,000 gallons of wastewater escaped from manholes in the Hawaiian capital's Waikiki neighborhood and entered storm drains leading into the ocean.

The escape was facilitated by people who had illegally opened the manholes to alleviate flooding during heavy rainfall, Hawaii News Now reported. The cancellation came at an unfortunate time -- Monday would have been Kahanamoku's 125th birthday. Sewage leak at Perth beach. UPDATE: Millions of litres of raw sewage may have been flowing into the ocean off a popular beach in Perth’s southern suburbs for up to two weeks, fuelling concerns it could have made people sick. 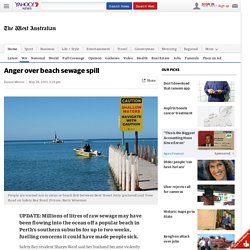 Safety Bay resident Sharyn Ward said her husband became violently ill after going for a routine swim off Waikiki Beach on Sunday through an area that was closed this morning because of sewage contamination. The Water Corporation confirmed late yesterday a failure at a pumping station caused 3.4 million litres of wastewater to spill into Safety Bay near the corner of Malibu Road and Safety Bay Road. The incident forced the closure of the beach between the Bent Street jetty and View Road and prompted warnings for people to stay out of the water and avoid fishing in the area. Depending on advice from the Health Department, the closure could stay in place for days. She also criticised its failure to alert residents sooner. “That is completely unacceptable.

Sewage report for Mornington Beach. Poor sewage clean up leads to EPA fine. A North West water corporation has been fined more than $7000 after they failed to clean-up a sewage spill in a timely manner on a private property in Ararat. 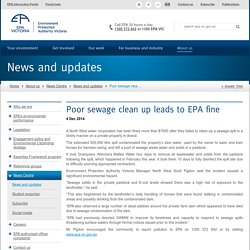 The estimated 500,000 litre spill contaminated the property’s dam water, used by the owner to swim and train horses for harness racing, and left a pool of sewage waste water and solids in a paddock. It took Grampians Wimmera Mallee Water four days to remove all wastewater and solids from the paddock following the spill, which happened in February this year. It took them 10 days to fully disinfect the spill site due to difficulty sourcing appropriate contractors.

Environment Protection Authority Victoria Manager North West Scott Pigdon said the incident caused a significant environmental hazard. National Pollutant Inventory. Ammonia poisoning: MedlinePlus Medical Encyclopedia. Carbon monoxide. Carbon monoxide (CO) is a colorless, odorless, and tasteless gas that is slightly less dense than air. It is toxic to hemoglobic animals (both invertebrate and vertebrate, including humans) when encountered in concentrations above about 35 ppm, although it is also produced in normal animal metabolism in low quantities, and is thought to have some normal biological functions. In the atmosphere, it is spatially variable and short lived, having a role in the formation of ground-level ozone. Carbon monoxide consists of one carbon atom and one oxygen atom, connected by a triple bond that consists of two covalent bonds as well as one dative covalent bond.[5] It is the simplest oxocarbon and is isoelectronic with the cyanide anion, the nitrosonium cation and molecular nitrogen.

Humans may be exposed to arsenic mainly through food and water, particularly in certain areas where the groundwater is in contact with arsenic-containing minerals. To what extent can arsenic exposure affect human health or the environment? 1. 13.1Wastewater_Treatment_Plants_Future.pdf. Disadvantages of Recycling Water. Recycling water involves reusing wastewater that has gone through a treatment process. The water is usually used for irrigation or industrial purposes, although there are a few places where recycled water is being used or considered for use as drinking water.

Though the process has many benefits, most importantly the conservation of water in places where it is scarce, it also has disadvantages. Using recycled water can mean increased costs for infrastructure such as additional treatment facilities and extra pipes to transport it. According to the Australian Academy of Science, the Australian city of Toowoomba planned to spend $68 million on a new wastewater treatment plant as part of its plan to use recycled water to supplement its drinking water supply.

Another Australian city, Goulburn, planned to spend $32 million on a similar facility for the same purpose. Using recycled water, especially as drinking water, requires overcoming public opinion, which can be difficult. Advantages/Disadvantages - Water Treatment Systems. Storages over the years - Melbourne Water. Monitoring Victoria’s waters. Victoria’s water environment is monitored in a variety of ways by a range of organisations. This page provides an overview of the monitoring programs that exist in Victoria and links to the Victorian Water Resources Data Warehouse, where much of this information can be accessed.