Remilitarisation of the Rhineland. Anschluss. On the day on which she was to have voted on her freedom and independence, Austria was last night officially proclaimed a "State of the German Reich. 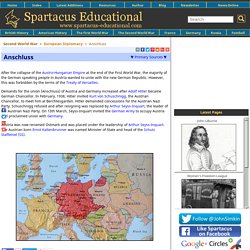 " The Anschluss has been brought into being. The Sudetenland. For over 1000 years the border region called Sudetenland between Bohemia and Germany was part of several legal Czech monarchies. 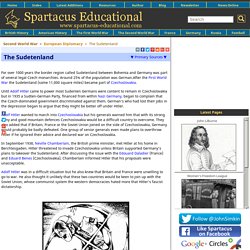 Around 25% of the population was German.After the First World War the Sudetenland (some 11,000 square miles) became part of Czechoslovakia. Until Adolf Hitler came to power most Sudenten Germans were content to remain in Czechoslovakia but in 1935 a Sudten-German Party, financed from within Nazi Germany, began to complain that the Czech-dominated government discriminated against them. German's who had lost their jobs in the depression began to argue that they might be better off under Hitler.

Adolf Hitler wanted to march into Czechoslovakia but his generals warned him that with its strong army and good mountain defences Czechoslovakia would be a difficult country to overcome. They also added that if Britain, France or the Soviet Union joined on the side of Czechoslovakia, Germany would probably be badly defeated. Munich Agreement. During the weekend of 23rd October 1937, Nancy Astor and her husband, Waldorf Astor, had thirty people to lunch. 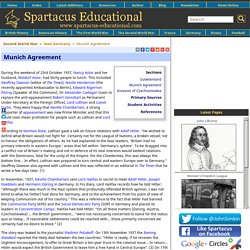 This included Geoffrey Dawson (editor of The Times), Nevile Henderson (the recently appointed Ambassador to Berlin), Edward Algernon Fitzroy (Speaker of the Commons), Sir Alexander Cadogan (soon to replace the anti-appeasement Robert Vansittart as Permanent Under-Secretary at the Foreign Office), Lord Lothian and Lionel Curtis. They were happy that Neville Chamberlain, a strong supporter of appeasement was now Prime Minister and that this would soon mean promotion for people such as Lothian and Lord Halifax. According to Norman Rose, Lothian gave a talk on future relations with Adolf Hitler. "He wished to define what Britain would not fight for. Czechoslovakia. Czechoslovakia was created in 1918 from territory that had previously been part of the Austro-Hungarian Empire. 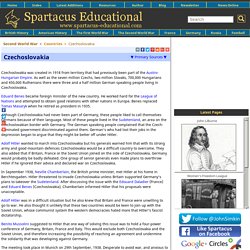 As well as the seven million Czechs, two million Slovaks, 700,000 Hungarians and 450,000 Ruthenians there were three and a half million German speaking people living in Czechoslovakia. Eduard Benes became foreign minister of the new country. He worked hard for the League of Nations and attempted to obtain good relations with other nations in Europe. Benes replaced Tomas Masaryk when he retired as president in 1935. Although Czechoslovakia had never been part of Germany, these people liked to call themselves Germans because of their language. Adolf Hitler wanted to march into Czechoslovakia but his generals warned him that with its strong army and good mountain defences Czechoslovakia would be a difficult country to overcome. In September 1938, Neville Chamberlain, the British prime minister, met Hitler at his home in Berchtesgaden. 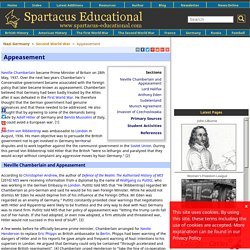 Over the next two years Chamberlain's Conservative government became associated with the foreign policy that later became known as appeasement. Chamberlain believed that Germany had been badly treated by the Allies after it was defeated in the First World War. He therefore thought that the German government had genuine grievances and that these needed to be addressed.

He also thought that by agreeing to some of the demands being made by Adolf Hitler of Germany and Benito Mussolini of Italy, he could avoid a European war. (1) Joachim von Ribbentrop was ambassador to London in August, 1936. Nazi-Soviet Pact. In the 1930s Joseph Stalin became increasingly concerned that the Soviet Union would be invaded by Nazi Germany. 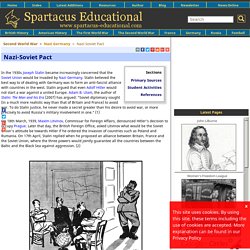 Stalin believed the best way to of dealing with Germany was to form an anti-fascist alliance with countries in the west. Stalin argued that even Adolf Hitler would not start a war against a united Europe. Adam B. Ulam, the author of Stalin: The Man and his Era (2007) has argued: "Soviet diplomacy sought (in a much more realistic way than that of Britain and France) to avoid war. To do Stalin justice, he never made a secret greater than his desire to avoid war, or more precisely to avoid Russia's military involvement in one. " (1) On 18th March, 1939, Maxim Litvinov, Commissar for Foreign Affairs, denounced Hitler's decision to occupy Prague. Neville Chamberlain, the British prime minister, did not like the idea.

History of Poland. In the eighteenth century Poland was an independent country with its own monarch. 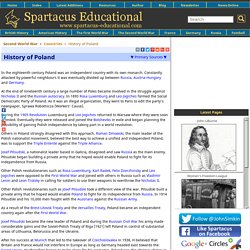 Constantly attacked by powerful neighbours it was eventually divided up between Russia, Austria-Hungary and Germany. At the end of nineteenth century a large number of Poles became involved in the struggle against Nicholas II and the Russian autocracy. In 1893 Rosa Luxemburg and Leo Jogiches formed the Social Democratic Party of Poland. As it was an illegal organization, they went to Paris to edit the party's newspaper, Sprawa Robotnicza (Workers' Cause).

During the 1905 Revolution Luxemburg and Leo Jogiches returned to Warsaw where they were soon arrested. Others in Poland strongly disagreed with this approach. Josef Pilsudski, a nationalist leader based in Galicia, disagreed and saw Russia as the main enemy. Other Polish revolutionaries such as Josef Pilsudski took a different view of the war. Anti-Comintern Pact.